END_OF_DOCUMENT_TOKEN_TO_BE_REPLACED

The Eurozone's returning crisis and new QE sure matter. But there's more driving gold higher...
GOLD held flat against the US Dollar in 2014, but things are looking up for the yellow metal, Frank Holmes writes at US Global Investors.
Last week I returned from presenting at the Vancouver Resource Investment Conference, where sentiment for gold was through the roof.
And with good reason. Even though gold was down last year, it still ranked as the second-best-performing currency, following the US Dollar. The metal has risen about 10% year-to-date, and last Tuesday, for the first time since mid-August, it broke through the $1300 mark.
You've probably heard or read that gold's breakout is a direct result of what's currently happening in Europe, but there's much more to the story.
To be clear, the events I'm referring to are a huge deal and shouldn't be discounted. As we say at US Global Investors, government policy is a precursor to change, and certainly gold has struck a musical chord in the world of currency symphonies.
The European Central Bank's (ECB's) unveiling of a much-needed, trillion-Dollar quantitative easing (QE) program will hopefully lead to a stronger economy in the Eurozone. For two years now, it seems the region has held much of the world hostage with its lack of growth.
Switzerland unexpectedly unpegged its currency, the Swiss franc, from the Euro, shocking money managers all over the world. The country also let its 10-year government bond yield sink into negative territory, joining Germany, Spain and Italy, whose yields now hover near record lows. This makes other assets, especially gold, look much more attractive.
And in Greece, the radical far-left, anti-austerity Syriza party just took control of the government, sending shockwaves throughout the European markets and raising the possibility that the Mediterranean country might leave or be booted out of the Eurozone.
All of these developments have spurred investors to seek safety in gold. But there's more at work fueling the metal's ascent.
As I've discussed many times before, the strong US Dollar – it's currently up 2.2 standard deviations for the 10-year period – has not only weighed on crude oil but also caused other global currencies to depreciate. Both have helped many foreign gold producers expand their profit margins, as bullion is then able to gain in value more quickly.

"The Canadian Dollar has weakened quite a bit against the US Dollar for a lot of our gold stocks in Canada," Ralph Aldis, portfolio manager of our gold funds, explained during our most recent webcast."These producers benefit when the local currency depreciates."

This is because they pay their workers in the weaker local currency but sell their bullion in US Dollars.
When expressed in Canadian Dollars, gold has sharply ramped up to a nine-month high. Gold has also shot upward in Japanese Yen and Euro terms.
On the mining equity side, a weaker South African Rand has been a tailwind for two of our South African holdings. Then there are falling fuel costs, ordinarily gold miners' biggest expense.

"If you factor in lower energy prices, that basically gives companies a double whammy in terms of margin expansion," Ralph said.

Headquartered in Toronto, Barrick Gold, the world's largest gold producer, now saves about $25 per ounce on lower diesel expenses, according to BullionVault.
Before it started recovering at the beginning of January, gold had been pretty banged up since mid-August. As a result, companies have slashed capital spending, especially the junior miners.
But recently we've seen merger and acquisition (M&A) activity in the gold space, typically a good sign. In late November, Osisko Gold Royalties announced it would buy Quebec City-based Virginia Mines for $424 million, and last week we learned that Vancouver-based Goldcorp will be acquiring precious metals explorer Probe Mines for $440 million. Probe is a relatively new player in the field, having made two discoveries in Ontario since 2009.
This makes sense. If you're looking to expand your company, you might as well do it when everything's on sale. But these M&As also indicate that there's enough confidence in the future of the precious metals industry to justify such capital spending. It says a lot about the market that Goldcorp would agree to purchase a younger exploration company, a move we haven't seen in a while.
This is what largely drives gold demand: confidence in the metal as a store of value, in good times and in bad. Gold is much more than a commodity – it's a form of currency, one that "has never required the credit guarantee of a third party," as former Federal Reserve Chair Alan Greenspan made clear in September.
Last year, gold was the second-strongest currency in the world, trailing only the US Dollar. It's amazing how well it held up under the pressure of the greenback. Not just investors but also central banks recognize this.

"If the Dollar or any other fiat currency were universally acceptable at all times," Greenspan said, "central banks would see no need to hold any gold. The fact that they do indicates that such currencies are not a universal substitute."

Indeed, we're seeing central banks all around the world shoring up their own gold reserves by repatriating bullion from foreign institutions. December saw the biggest monthly outflow of gold from the New York Fed since 2001, bringing its holdings to their lowest level this century. 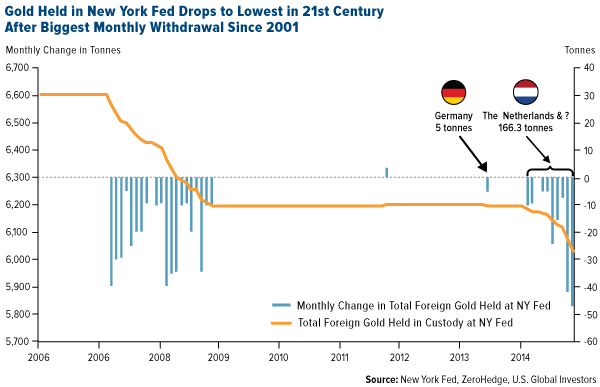 Central banks might be jittery from global growth concerns – the International Monetary Fund just downgraded its growth forecast for 2015 – or simply recognizing the tenuousness of fiat money. Either way, the message is resounding: gold is an essential component to a strong portfolio and an excellent store of value.