END_OF_DOCUMENT_TOKEN_TO_BE_REPLACED

The number of people on food stamps has risen even when the US unemployment rate has fallen...

YOU GET excellent research from the United States Department of Agriculture (USDA), writes Gregor Macdonald.

In March of 2010 I discussed their report, Energy Use in the US Food System, which noted that the energy-cost intensity of food production was expanding. Given the strong advance in energy and food poverty the past few years, as reflected in soaring participation in SNAP (food stamp programs), the USDA has produced a new piece of research just last month, 'Alleviating Poverty in the United States: The Critical Role of SNAP Benefits'.

The report concludes that, SNAP benefits have a relatively stronger effect on the depth and severity of poverty than on the prevalence of poverty. Yes, that makes sense. But something additional in a key chart from the report caught my attention: 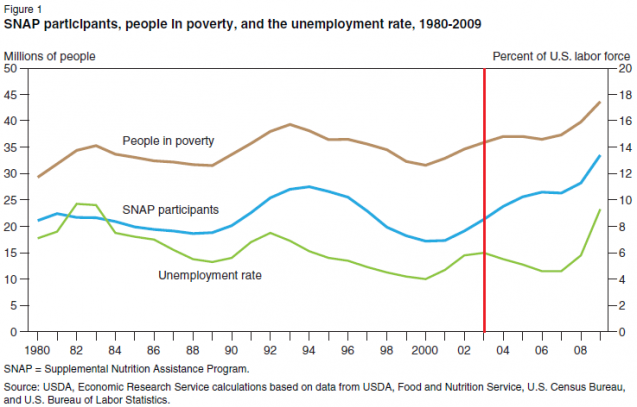 I've drawn a red, vertical line in the USDA chart at the year 2003. As you can see, that is the year that the unemployment rate started to fall again after the previous recession, but, that the poverty rate and participation rate in food stamp programs went higher. Why the divergence? The explanation is rather obvious to me. This is the period when energy, especially oil, entered a phase transition to structurally higher prices. It's also the period that food price inflation, and food price volatility, entered the system. Eventually all series would correlate once again, after the 2008 financial crisis.

There's certainly no need to post a chart of energy prices here. However, I did find a fresh and up to date chart of food price inflation from a Congressional Budget Service report: 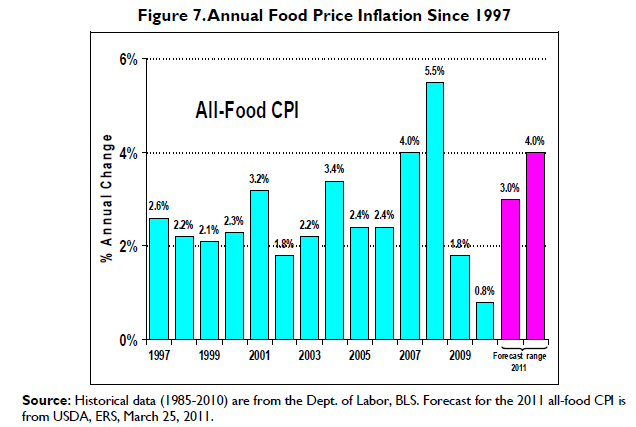 What's happened in the United States the past decade is that purchasing power for food and energy has declined. While government data shows overall inflation as tepid, the effects of this decline can be observed in real terms in the advance of poverty. This is why I began my research into city level SNAP data years ago, in the automobile and gasoline sensitive economies of southern California.

Since that time a number of reports and data have recorded the strong advance of food poverty and energy poverty in the United States. If you are looking for inflation you won't find it in the aggregate. The inflation's in the poverty.