END_OF_DOCUMENT_TOKEN_TO_BE_REPLACED

THESE ARE uncharted waters, write Doug Hornig and Bud Conrad, editors of The Casey Report.

The shenanigans being foisted upon us by Washington are unprecedented at least since World War II, and probably ever. There is so much complexity, if not sheer trickery, going on, it has become increasingly difficult to make any sense of what's happening. A glance at the Fed's balance-sheet shows that. And much less can one know for sure what the net effect is going to be.

Nevertheless, we must try.

As always, the investor's first line of inquiry should be directed at the data, for the raw numbers tell us things that our politicians will reveal only reluctantly, if at all.

Let's first take a look at what didn't happen. Over the past four months, American banks have received massive amounts of bailout money, ostensibly to unfreeze the credit market and enable the banks to lend money again. That it didn't work is obvious from a couple of charts. 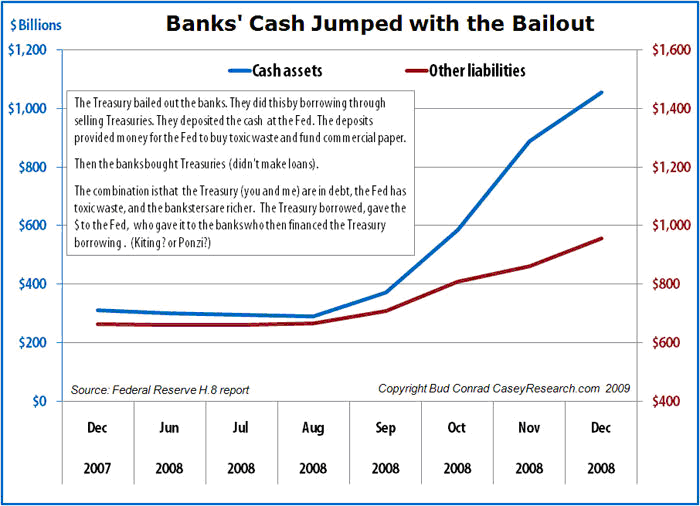 Note that US banks' cash assets rose by over a half-trillion dollars in just two and a half months. That's primarily the money (the taxpayers' money) that was handed over to them via the Federal Reserve.

Did it go to a socially useful purpose? Mmmm...no. In actuality, we got scammed.

Here's how the scam operates: The Treasury borrowed our dollars via the sale of Treasury notes and deposited the cash at the Fed. The Fed used the money to relieve commercial banks of their most toxic liabilities, adding them to its balance-sheet. But instead of lending it out again to businesses or consumers, the banks simply bought more Treasuries, thereby polishing up their balance sheets. This is made starkly evident by our second chart, where you can see that cash was being hoarded even as lending declined. 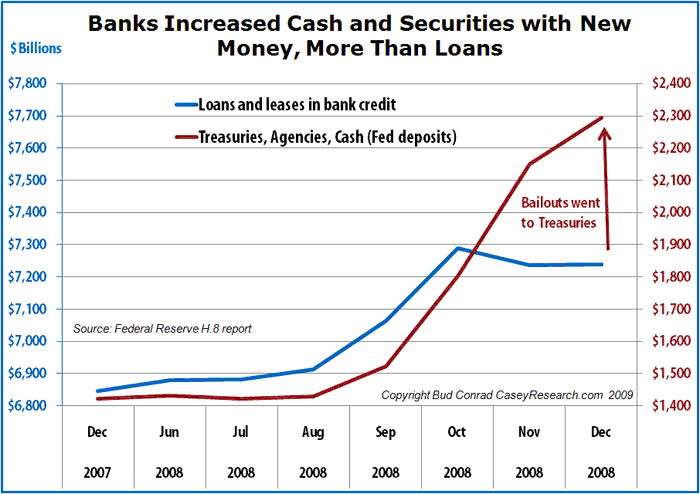 The net result of this asset shuffling is that the Treasury (that's the tax-payer, of course) incurred more debt, while the Fed absorbed all manner of toxic waste for which it may not get 10 cents on the dollar, and the banks wound up with many more bucks and much less junk.

That left the banks sitting pretty and chuckling all the way to...well, to the bank.

These were not small-potatoes moves, either. Check out our third chart. 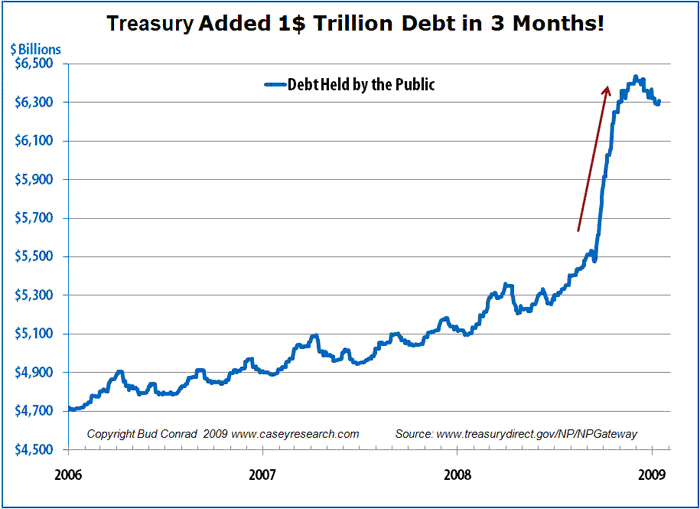 This bears repeating. The Treasury Department, on our behalf, nicked us for a cool trillion in three months. Never been done before.

And remember, over the same period, the Fed was bloating its balance sheet with financial garbage to the same trillion-dollar tune. 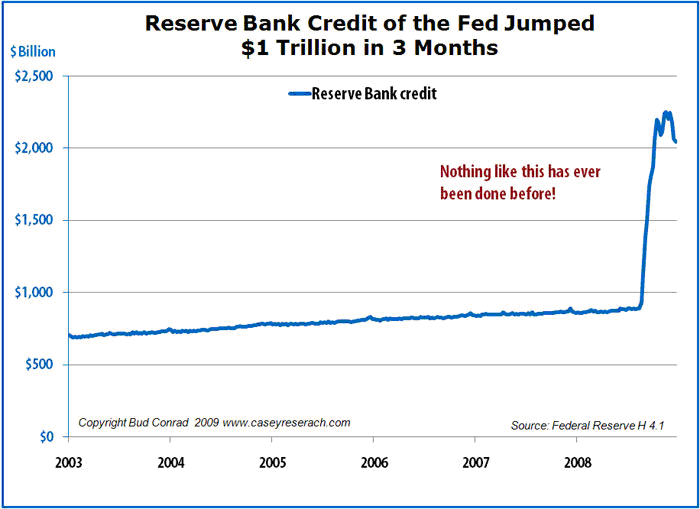 As badly as it's behaved at times, the Fed hasn't done anything remotely like this in all its checkered 95-year history. Truly this is uncharted territory.

What to do? Delicate financial balances are quickly falling into imbalance. Responses of gargantuan size have merely served to keep the system from collapsing and have barely begun to improve it. Thus, the situation is not yet stabilized. There will be new surprise problems, and bigger responses, for the foreseeable future. Of that we can be certain. And collectively, all the government's responses will inevitably have a negative effect on the value of the US Dollar and the other major currencies.

With all these momentous forces at play, it's understandable that you would feel small and powerless. Obviously, you can't fight the Fed. But are there ways to play along with it? Is it possible to survive, and even prosper, while the economy heads for hell in a handbasket?

Yes... but you must look behind the headlines, learn to follow locked-in trends, and develop the foresight to invest counter to what the herd may be doing. In these times of crisis and extremely volatile markets, the trend can truly be your friend... if you recognize it in time to profit while the investing masses are still oblivious.