END_OF_DOCUMENT_TOKEN_TO_BE_REPLACED

You can't keep a good market down. Nor a bad market up...

ON 18 SEPTEMBER 2008 – three days after the collapse of Lehman Bros. – US regulator the Securities & Exchange Commission issued what it called an "emergency order" banning the short-selling of 799 financial stocks.

The order, running for 10 business days, came amid of flurry of short-selling restrictions – first demanding that all stock sold short be delivered to the buyer within 3 days, and then that all current open shorts be closed – made under emergency powers granted by the Depression-era Securities Exchange Act of 1934. It came two months after a separate ban on selling short the stock of Lehmans, Fannie Mae, Freddie Mac and 16 other securities firms.

Some success that proved.

"Unbridled short selling is contributing to the recent, sudden price declines in the securities of financial institutions, unrelated to true price valuation," said SEC chairman Christopher Cox the next day, announcing the new defense of 799 ailing firms' capital base.

"The Commission is committed to using every weapon in its arsenal to combat market manipulation that threatens investors and capital markets."

News that "market manipulation" was over, along with the forced rush to cover existing shorts, saw the sector jump more than 12% higher in one day as priced by the SPDR Financial Select ETF (XLF). You can see that day's jump in trading volume on the chart below, too. 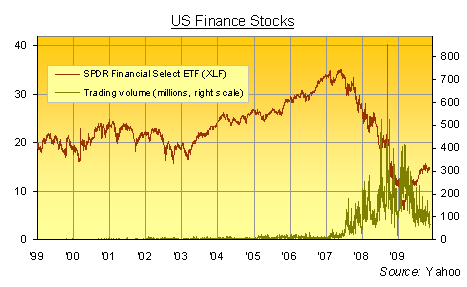 Without the selfish hedge-fund black hats knocking perfectly sound companies lower, America's finest financial firms could get back to making money rather than hemorrhaging risk capital at the NYSE. Or so the logic (or what passed for logic) ran in Washington.

Yet by the time the Sept. order expired at midnight 2nd October, US financial stocks were back where they'd started before the SEC invoked this power. Two days later, they'd sunk to a fresh six-year low. By the end of Oct. they had fallen a further 21%...and were on their way to a loss of more than two-thirds by the following March – and all this with the anti "naked shorts" regulations still firmly in place.

Glancing back from the comparative calm of late autumn 2009, you might think that short-selling was perhaps contained by the order. The plunge was worse after it lapsed, after all, and the market didn't quite get to zero. But even when extended for four months or more elsewhere, similar bans around the world met with similar success.

The UK's Financial Services Authority lifted its short-selling ban – begun the same day as the SEC's order (and just as the Bank of England was pumping £61.6 billion, then $110bn, into the two largest failed banks) – on 16th Jan. 2009, by which time Britain's banking stocks had lost a further 61% of their value. Greece didn't get round to lifting its short-selling ban until 1st June 2009. Nor did South Korea. Australia was a week earlier, but by then the ASX-200 Financial index stood lower by one-fifth from just after the Lehman's collapse, albeit turning higher from the 34% drop to March '09.

Vietnamese consumers, suffering cost-price inflation of 25% by June 2008, were exchanging capital in the form of Dong into gold. Indeed, the world's largest market for investment gold bars outside the West during the first quarter of last year, Vietnam had already imported 60 tonnes of gold – paid for by a net outflow of $1.8 billion – during the first five months of the year. That was twice the pace-by-volume set in early 2007.

So the communist authorities, rather than addressing the plight of the Dong – which had already slipped further in the black market, despite an outright devaluation of the regime's US-Dollar peg two weeks before – opted instead to ban gold imports altogether. Because if Buying Gold was how people were choosing to defend themselves, then just like US funds short-selling the lamest financial stocks, they must in fact be part of the problem. Right?

Doubling import duties on gold to 1% in May 2008 hadn't helped. An outright ban remained to be tried. But the upshot? Seventeen months later – and with domestic gold owners blamed for profiteering as new would-be buyers sought refuge in gold – the ban was lifted at last. By early Nov. '09, however, Vietnamese gold prices stood some 42% higher, thanks both to the rising international price but more especially to the lack of inflows of metal.

The Dong, in short, had lost ground to the Dollar but sunk versus gold. And all along, Vietnam's appetite for new metal was part-sated regardless. The GFMS consultancy reckons than 30% of gold imports to Thailand found their way across the border during the second-half of 2008.

Even with new gold now flowing into the country, gold still trades above 27.58 million Viet Dong per tael – south-east Asia's variable "street dealing" unit, equal to 1.2 troy ounces in Vietnam. That puts the domestic cost of gold roughly $52 an ounce higher than international spot pricing according to figures from Vietnam Gold Market News...which is down from the $150 premium achieved just before Hanoi relented, but still a marked premium for Vietnam's capitalist-communist citizenry.

Aimed at "stabilizing the gold market and preventing speculation", the central bank's statement in fact helped send the Vietnamese Dong to a 16-month low on the currency market, down 6.4% on 1-year forward contracts, thereby pushing local gold prices higher again!

Since then, and with the currency still falling, Hanoi's foreign currency reserves have now shrunk by one quarter to $16.5 billion from the start of this year. Fighting to defend its Dollar-peg in the market – by buying up Dong with overseas money – the government admitted that it's target trade deficit for 2009 was already seven-eighths spent with another two months to go. So this week, it opted to raise interest rates – the obvious route to stemming a currency run – but not until December. It's also devalued the Dong yet again, down 5.44% from Thursday morning per Dollar, but still only playing catch-up with the black market exchange rate once again.

Commercial banks are meantime banned from trading in Dollars if the Dong moves 3% or more away from its target exchange rate. Quotas also remain in place for importing gold, with licenses for 10 tonnes issued this week according to Reuters. Some 6.8 tonnes of bullion have already been imported, the state TV station reported today, since the import ban was lifted a fortnight ago.

"These imports will have an impact on the local gold market," reckons Van Giau. But then he also says the latest Dong devaluation and interest-rate hike – from 7% to 8% –represent a "solution to strongly intervene." Whereas HSBC's chief Asian economist, Robert Prior-Wandesforde, sees Vietnamese interest rates rising further to 11% by year-end, while GFMS analyst Rhona O'Connell notes how "The change in the Vietnamese government's policy over gold imports [in fact] illustrates that demand remains strong at grass roots level."

Oh sure – government policy helped stem the last global bull market in gold. Raising the margin requirement on US Gold Futures took the heat out of the metal's parabolic surge of late-Jan. 1980, coinciding with what then proved a 28-year record at $850 an ounce. But unlike blaming short-sellers for the collapse of the banks, it was only by addressing the true fundamentals that the authorities could hope to reverse the flight into gold.

Double-digit returns offered to cash-in-the-bank killed the need to defend savings with metal. And this time around, not even import bans could take the heat out of Vietnamese hoarding.