END_OF_DOCUMENT_TOKEN_TO_BE_REPLACED

The rescue efforts in Europe haven't worked – whatever politicians and central bankers might claim. Time for another strategy...

U.S. INVESTORS came back from their Labor Day holiday to another laborious trading day on Wall Street yesterday, writes Eric Fry for the Daily Reckoning.

The Dow Jones Industrial Average ended not far above 11,000 – having plummeted below that level soon after opening.

For the first three trading days of September 2011, the Dow has tumbled more than 600 points — or about 5% — the worst three-day start for the month of September in the history of the US stock market. (Thanks to CNBC for this utterly meaningless statistic).

As it happens, the Dow is also down about 5% for the year-to-date, and down about 5% from its record high of October 2007. "Down 5" is not exactly the new "up," but it feels like it. Over in the Old World, the best-performing stock market in the Eurozone is down 20% for the year. That's the best one.

If you jump outside the Eurozone, into the countries that opted not to latch the Euro albatross around their necks, you find a couple of star performers like the British and Swiss stock markets — both down only 13% for the year.

The main problem, both here and there, is credit — or rather, credit contraction. Lots and lots of people, along with lots and lots of governments, are facing debts they simply cannot pay. However, instead of allowing the inevitable defaults to occur and to run their course, governments and central banks throughout the Western World are tirelessly cobbling together ad hoc bailouts, guarantees, rescue packages, emergency lending facilities and debt "workout" schemes — all designed to reverse the force of economic gravity.

But overly indebted entities will default, just as inevitably as flying pigs will hit the pavement.

The glide path of Greece's financial condition is obvious. This pig is heading for the pavement, as are all the other PIIGS nations, which is why the Europeans are so busy stacking up pillows and mattresses on the ground below.

The bailouts will enable Greece, Portugal, Ireland, Italy and Spain to enact the "austerity measures" that will restore solvency and keep their governmental finances airborne. Unfortunately, the effort to keep these struggling nations afloat threatens to sink those around them.

After more than 18 months of efforts and hundreds of billions of Dollars of bailout funds pouring into Athens, Greek finances are still as sick as Dionysus after a long night of drinking. To wit: Greece's borrowing costs hit a new record high yesterday. To borrow money for two years, the Greek government would have to pay a whopping 52.3% per year. The US Treasury, by contrast, pays a minuscule 0.20% on its two-year debt. 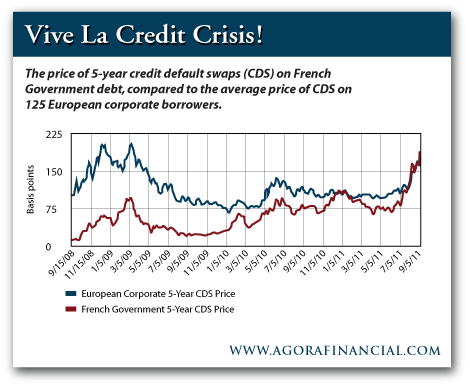 The squiggles on this chart track the pricing of two different types of credit default swaps (CDS). Don't let your eyes glaze over just yet. This is fascinating stuff. And even if it isn't fascinating, it is instructive. CDS, to refresh, are an insurance policy against default by a specific borrower. Therefore, the greater the perceived risk of default, the higher the price of the insurance, i.e., the CDS.

This price trend does not suggest that a default by the French government is probable. In fact, such an eventuality seems highly unlikely. But the price trend of French CDS relative to corporate CDS, does suggest that a new phase of the credit crisis is underway.

The Era of the Sovereign Default is underway. Greece will be the first, but it won't be the last.

As this sovereign default cycle unfolds, government bond yields are likely to climb, economic activity is likely to slow and paper currencies are likely to depreciate relative to gold and other hard assets. That's the bad news.

The good news is that post-default nations will emerge leaner and meaner and ready to initiate a new era of economic growth.

That's how the world works...or at least how it should work. It is probably no accident that this year's very, very short list of winning stock markets features countries that suffered a painful sovereign default and/or currency crisis within the last 20 years.

The stock markets of Indonesia, Thailand, Vietnam, Philippines, Iceland, Ghana, and Venezuela are atop the leader board for 2011 with positive performances.

Default is painful, but it is also a necessary component of the economic life-cycle.

Looking to protect your wealth with a Gold Investment? Discover how BullionVault could save you money...