END_OF_DOCUMENT_TOKEN_TO_BE_REPLACED

How the European Central Bank is "rewarding speculators" in Gold Bullion...

ON MONDAY MAY 10th, Jean-Claude "Tricky" Trichet of the European Central Bank made a radical U-turn, writes Gary Dorsch of Global Money Trends.

This "shock and awe" triggered a massive plunge in Greek and Portuguese bond yields and drove CDS rates sharply lower. For their part, the Eurozone politicians and the IMF upped the bailout fund to a staggering €750 billion, including loan guarantees to be tapped by highly indebted Eurozone governments shut-out of credit markets.

Senior IMF official Marek Belka said the emergency package was "morphine for the markets". And like other bailouts before it, this package promises a gigantic transfer of public funds to the big European banks. The biggest winners were major banks in Spain, France, and Italy. Banco Santander, BBVA, Société Générale, BNP Paribas, and Unicredit all saw increases of 20% or more in their stock price.

Like the $750 billion TARP bailout fund in the United States, this money is being handed over to the European oligarchic banks with no strings attached. Teetering on the edge of default, the banks holding €650 billion of Club-Med government bonds averted catastrophe again, with €550 billion in funding from European governments, and €200 billion from the IMF.

However, EU countries with AAA credit ratings, such as Germany, the Netherlands, or France, would have to borrow hundreds of billions of Euros to fund the bailout, thereby undermining their own creditworthiness. Thus, the next phase of the global debt crisis could be an exodus from AAA-rated sovereign bonds. As for Greece, higher taxes, fewer welfare benefits, 10% salary cuts and no bonuses for public workers could provoke a catastrophic collapse of its economy. 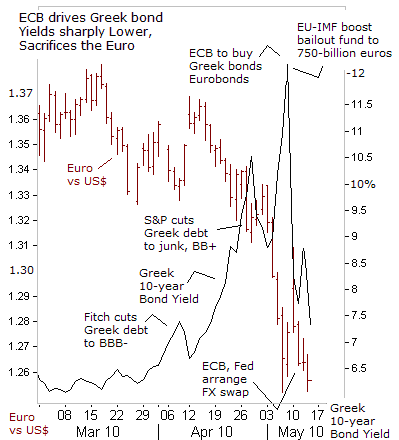 The foundation of the Euro rests on the "Stability and Growth Pact" adopted in 1997, by which the signatory countries agreed to enforce strict fiscal policies, including limiting budget deficits to 3% of GDP and public debt to 60% of GDP. But today, only three of the 16 Eurozone countries are in compliance, casting doubt over the viability single currency experiment. Greece is the worst offender, with a budget deficit of 14% of GDP and total debt equaling 115% of GDP.

The wildfires blazing in the bond markets of Greece, Portugal, and Spain, drove the Euro down sharply to the $1.25-level. ECB chief "Tricky" Trichet came out fighting on its behalf, "I am more than confident than ever in the future of the Euro," he told France's radio one on May 11th. However, by shifting to the radical QE-scheme, Trichet has irrevocably tarnished the ECB's anti-inflation credentials, and set in motion, the eventual disintegration of the Euro.

The ECB won't reveal the size of its bond-buying spree, because "the information could assist speculators." However, such secrecy fuels suspicions that the scope of the Euro printing operation is going to be enormous. Speaking to German radio station Deutschlandfunk, Bundesbank hardliner Juergen Stark said the "ECB would hold the Club-Med bonds, until the end of their maturity," indicating that the massive injections of Euros would be very long-term.

Trichet also denied suggestions that the ECB has adopted the monetary strategy of Zimbabwe. "We have not changed our monetary policy. All liquidity which being put in through these interventions will be taken back. We are not running money printing presses." But alas, Trichet has already dumped the Euro experiment into the trash heap of history. The only defense for the Euro is a foreign currency swap arrangement with the US Federal Reserve, which can increase the supply of US-Dollars in the short-term, and help the ECB to engineer an orderly devaluation of the Euro, and reduce the risk of a frightful free-fall. 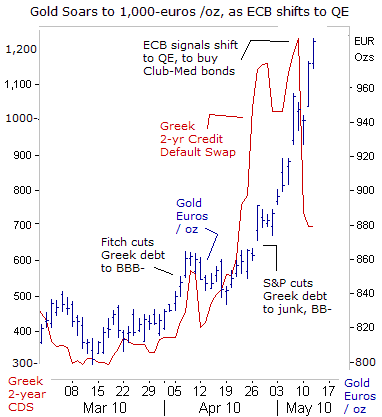 "Tricky" Trichet is a crafty poker player. But while he's rescued the French and German banks, he's stripped the Euro of its reserve currency allure.

"We will mop up this extra liquidity again. We've done this in the past," he said, spewing propaganda about sterilization. As part of its war on the bond vigilantes, the ECB is lending of unlimited amounts of Euros to the banking oligarchs at borrowing rates of 1%, encouraging them to buy Eurozone government bonds – i.e. this is backdoor quantitative easing.

However, central bankers holding roughly $2 trillion worth of Euros in their foreign currency reserves can see through the smoke and mirrors, and they're nervous. Already, a massive flight for safety from the Euro and into the king of currencies – Gold Bullion – is underway.

Gold has soared in parabolic fashion, up 20% from a month ago, zeroing in on the psychological €1,000 an ounce level. After parabolic rallies, gold becomes subject to minor bouts of profit-taking. However, it's increasingly obvious that all paper currencies are at risk of collapse compared with Gold Bullion, due to the extreme abuses of central bankers worldwide.

"What the ECB is doing is a 180-degree about-face," declared Eurosceptic economist Joachim Starbatty on May 12th, noting Greek bonds were already rated at junk level by ratings agency S&P. "If a central bank buys bonds that international ratings agencies have declared are junk, then it should not be surprised that the Euros it produces are quickly seen as junk as well," he said.

Starbatty said the ECB is "rewarding speculators who are betting on higher inflation..."

Want to bet on higher inflation, but don't want to risk your money on anything but the Gold Price...? Start with a free gram – vaulted securely in Zurich, Switzerland right now – by using BullionVault...