END_OF_DOCUMENT_TOKEN_TO_BE_REPLACED

As a currency, the Euro doesn't have much competition. But against Silver Prices...?

"SILVER TAKES OUT Hunt High In Euros" proclaimed the Zero Hedge blog on Monday, writes Adrian Ash at BullionVault, pointing to the Hunt Brothers' failed corner at $50 per ounce in January 1980.

Regular readers of Zero Hedge's breathless hyperbole won't choke to know it was wrong, this time by only one third. Mistaking (and showing) a chart of month-end prices for a chart of daily Silver Prices, Zero Hedge's pseudonymous host, Tyler Durden, missed the true Euro-equivalent spike to €32.80 per ounce hit back on 18 January 1980. 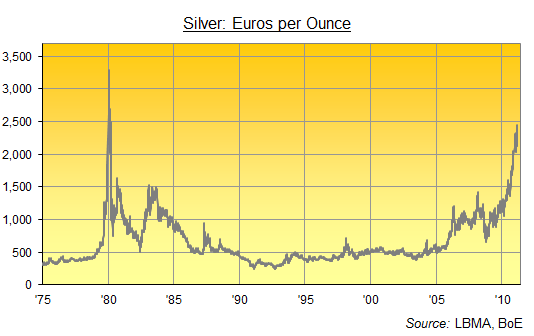 Set in what was then the Deutsche Mark, and figured across the decades at the irrevocable exchange rate of DM 1.95583,  that all-time top in the single Eurozone currency still stands,  some 34% above this week's top so far. Contra Zero Hedge, that record was set the very same day as the Dollar's record Silver Price...still some 46% above the metal's latest 31-year high.

Still, the point is near-enough made. Because the spike of three decades ago came and went in a blink. And silver, like gold, isn't just about the Dollar, even though its latest surge coincides with the latest plunge in the US currency.

Instead, Silver Bullion has also caught a strong and growing bid over the last 5 years against the Dollar's upstart challenger too. And since the Euro debt crisis really got started 12 months ago, the silver price has scarcely looked back...rising 108% from the start of 2010.

"The Euro as a currency is not in crisis. The single currency is sound and credible," said European Central Bank president Jean-Claude Trichet in an interview with Italian magazine L'Espresso earlier this month. Which, a little like Zero Hedge, is both premature and misleading. Because the Euro "as a currency" doesn't have to achieve very much to retain the same credibility as its modern-day competitors.

Against the older monetary measures of gold and silver, on the other hand, the Euro looks just as weak as the other three "big four" reserve currencies – the Dollar, Sterling and Yen.