END_OF_DOCUMENT_TOKEN_TO_BE_REPLACED

How to dispell money illusion in the Dow Jones Industrial Average...

Excluding AAPL from its 30 constituents is just one of the Dow Jones Industrial Average's many quirks. So is its ever-changing Dow divisor, a number seemingly picked at random to smooth out the math in the DJIA. And neither oddity changes the fact that this oddest of equity averages is hitting new all-time highs right now.

Signaling, if you ever doubted it, that the United States' economy is being re-forged as well.

But wait! If you think there's any link between the rise of the stock market and the health of the economy, then you might want to double-check  the Dow's value in real inflation-adjusted Dollars.

Or better still, now that it's morning in America once again, adjust the Dow by the cost of eating your breakfast... 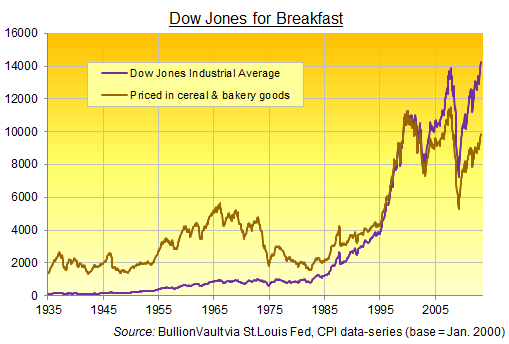 Alternatively, you could judge the Dow in terms of the stock market's dark, benighted opposite – a lump of gold bullion. Many people do, in fact. The Dow/Gold Ratio as it's known plots the value of the 30 Dow stocks in ounces of gold. 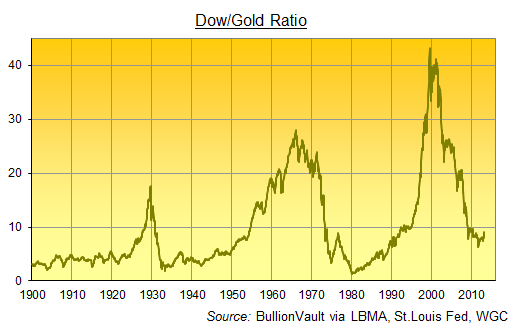 As you can see, the recent drop in gold bullion prices, plus the Dow's re-found vitality, have dented the stark trend of the last 13 years. During that time gold cut the cost of the United States' biggest listed businesses (well, a random selection of them) by some 85% top to bottom. Some die-hard gold bugs pointed time and again (ahem) to the historical low at 1 ounce for 1 unit of the DJIA.

Stocks have rallied however by 43% since the two-decade low of 6.3 ounces in the Dow/Gold Ratio hit in late-summer 2011. And turning to the broader, more respected (and AAPL-laden) index the S&P500, it was overtaken by gold – in nominal terms – back in April 2010. That was odd, as we noted at the time. Because gold in Dollar terms hadn't traded above the S&P in almost two decades. 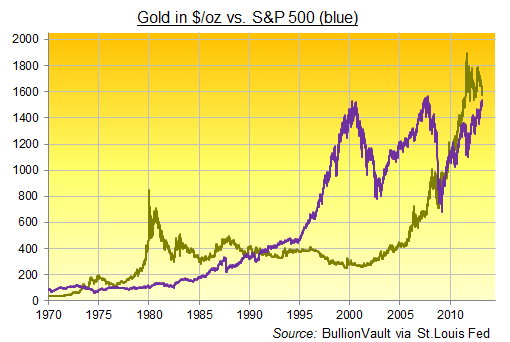 Each of these 3 charts looks backwards, of course. None can say much about where the cost of breakfast goods, gold or productive business assets might go from here. But even with the Apple issue aside, it's worth putting the Dow's new record highs into context.

Against the backdrop of zero rates and quantitative easing, at least the Dow/Gold ratio, like our new Dow/Breakfast measure above, doesn't fall for money illusion.