END_OF_DOCUMENT_TOKEN_TO_BE_REPLACED

Why investors are abandoning the greenback...

WHAT A SORRY STATE the US Dollar is in, writes Dan Denning in his Daily Reckoning Australia.

The Dollar index chart below shows that the greenback is getting ready to break below support at 74 on its way to new lows. It’s also important to note the Dollar has failed to rally on the “flight to safety” trade as it did in 2008 and early 2010. Not even an historic earthquake/tsunami/nuclear crisis has moved investors back into the Dollar. 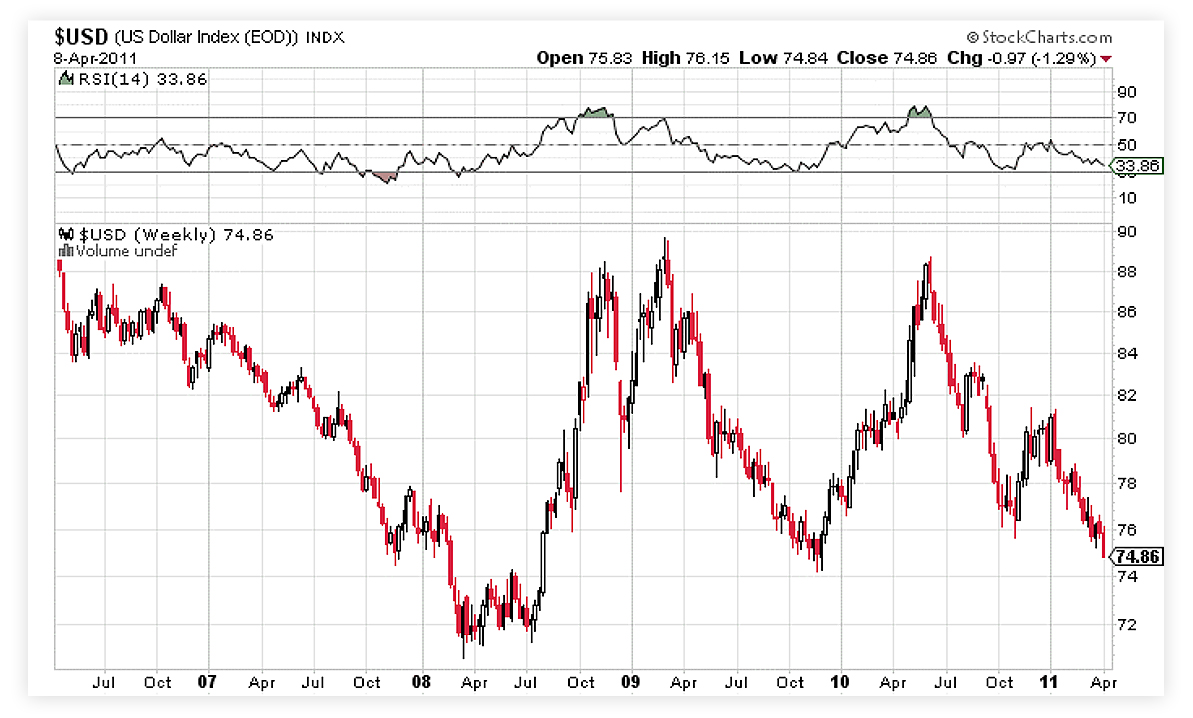 And why WOULD anyone buy the Dollar or loan the US government money for any length of time? The weekend shenanigans between the President of the United States and the so-called leaders of the US Congress were farcical bordering on the surreal and rage-inducing. Someone should send a memo to the guys in Washington that the United States of America is broke.

If cutting $33 billion in non-defense discretionary spending is the best these guys can do, they have shown how profoundly unfit they are as guardians of the nation's purse strings. What a bunch of entitled, elitist morons. They should all be fired and then deported, although we wouldn't wish that kind of export on our worst enemy.

The image below from the Congressional Budget Office tells you part of the US budget story. In simple terms, 61 cents out of every tax Dollar is mandatory spending, under the current budget rules. The "Mandatory" chunk includes Social Security, Medicare, Medicaid, unemployment, Veterans' benefits, and public pensions. By statute, it's money the government can't "unspend". 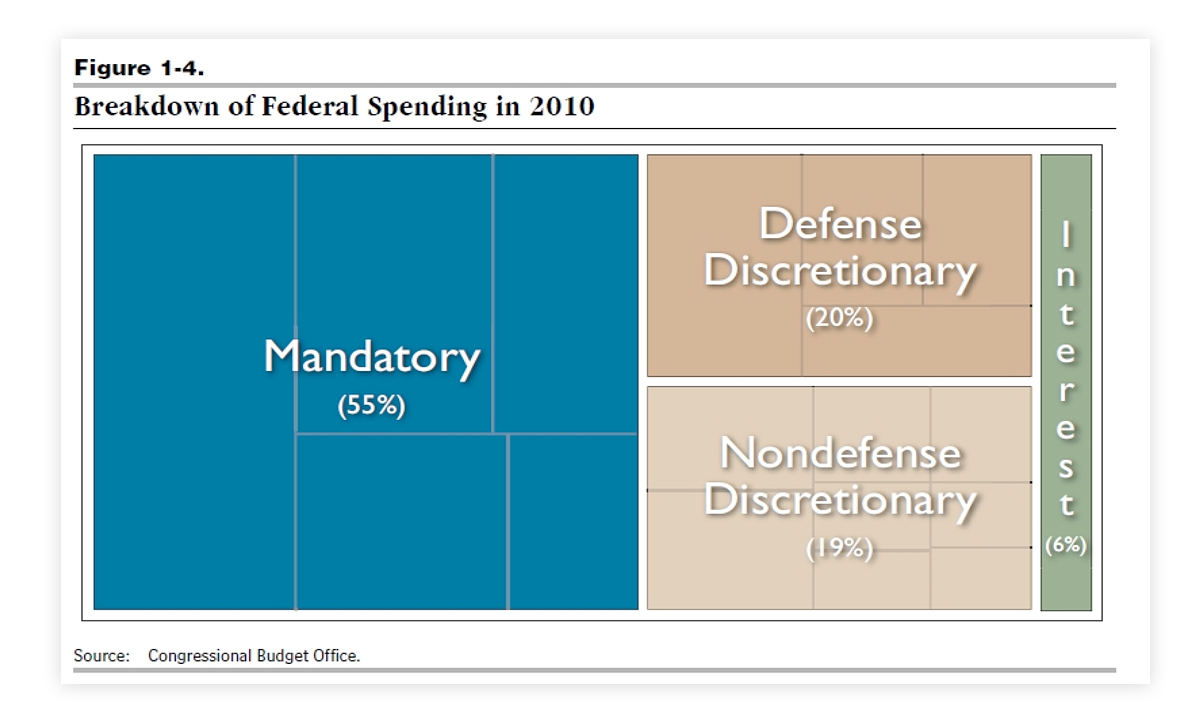 That is why last week's negotiations were supposedly so dramatic. The cuts had to be made from non-defense discretionary spending, even though that makes up just 19% of the total Federal budget. The lawmakers were arguing over a variety of smaller, boutique Federal programs that are near and dear to the corrupt hearts of various legislators.

By the way, we're counting the 6% interest payments on the $14.3 trillion national debt as mandatory, too. It is possible, of course, that the US could, at some point, stiff its bondholders. When you can simply print them the money you owe, defaulting seems overly dramatic. But you can see why Bill Gross has exited his Treasury position and compiled a $54 billion cash war chest.

It gets worse for America. Federal receipts in 2010 totaled $2.16 trillion. That was just enough to cover the "mandatory spending" part of the Federal budget, which amount to about $2 trillion. The other $1.3 trillion in spending — defense and discretionary spending — was all financed by Federal borrowing. And the morons were arguing over $33 billion. Unbelievable. Laughable. Pathetic.

Think about that scenario for a second. The United States is barely garnering enough in tax revenues to pay for mandatory spending. And the best its political leaders can do is agree, at the 11th hour, to cut $33 billion in spending. It shows you just how completely removed from reality America's political class is.

No wonder  silver and Gold Prices are spiking. Now that is a reality we can get behind.

It's pretty obvious what the US ought to do. First, it ought to end its long wars in the Middle East and Afghanistan, bring home troops from the 135+ nations in which they are currently deployed, including Japan and Germany more than 50 years after the end of World War Two. That would be a start. The US has more than enough submarines and nuclear weapons to defend itself.

Then the US would have to begin rewriting the "social contract" that has made entitlement spending mandatory. People won't like that. No one likes a lower standard of living. Look at the arguments raging in Europe.

But the debate is not about what kind of country you want to live in. The debate is about what the country can afford. And when the country is broke, you either face reality and make some very hard decisions...or you kick the can down the road like a coward.

Trouble is, there's not much of the road left. America's statutory debt limit of $14.3 trillion will be reached sometime in early May. Of course the Congress can raise that ceiling by law. But it can't make people buy the Dollar or US debt if they don't want to own them. And fewer and fewer investors (that aren't the Fed) want to own US debt.

The global attitude toward the Dollar is fast reaching a tipping point. This is one reason the Aussie Dollar continues to break record after record. US leaders will either make a serious and believable effort at real spending cuts. Or the next move down in the Dollar crisis will be even more disruptive for financial markets, and even more bullish for precious metals.

You can Buy Gold and Silver — and get access to live prices 24 hours a day — with BullionVault...