END_OF_DOCUMENT_TOKEN_TO_BE_REPLACED

Sovereign debt and central banks are the two things to watch right now...

ANYTHING short of the Fed announcing QE3 is not expected to help precious metals, writes Sumit Roy for Hard Assets Investor.

The push and pull of multiple forces kept precious metals prices capped over the past week. Gold, silver, platinum and palladium all fell modestly, but remained solidly in their respective ranges.

Sovereign debt and central banks are still the two things to watch as it relates to precious metals. Europe's debt woes continue to rattle markets, with Greece and Italy in focus. Though it has now received two bailouts from the EU and IMF, Greece must consistently apply the austerity measures that it promised in order to receive each installment of the bailouts.

Currently, the Greek government is negotiating for its next tranche, worth €8 billion. The latest sentiment is that the country will receive the funds, thus risk assets rebounded on Tuesday. If Greece receives the bailout funds, it takes off the table the possibility of a catastrophic default that could imperil the entire region. The fear is that Greece is the equivalent of Lehman Brothers back in 2008.

Nevertheless, every few months these Greece fears reemerge. The fact that market rates on Greek debt remain near record levels — the 10-year bond yield was last near 23% — indicates that many still believe the country will eventually default. 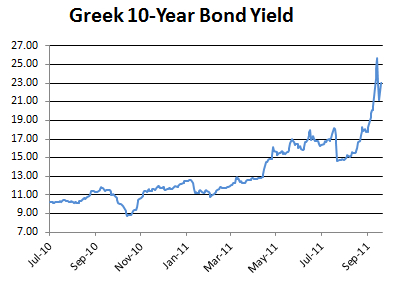 If and when we see those rates begin to drift down, that will indicate a growing confidence that Greece has gotten its finances in order and the risks of default have declined. We see such a situation in fellow bailout recipient, Ireland. Ten-year Irish bond yields are now 8.64%, well below the 14% peak back in July. 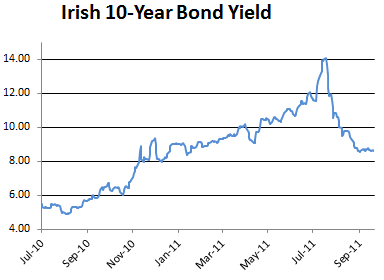 But Greece isn't the only concern, nor is it the largest. That would be Italy, with its €1.9 trillion ($2.6 trillion) worth of debt, dwarfing Greece's €370 billion. Interest rates on the country's debt remain elevated, with the 10-year bond last yielding 5.66%, despite ongoing purchases by the European Central Bank. 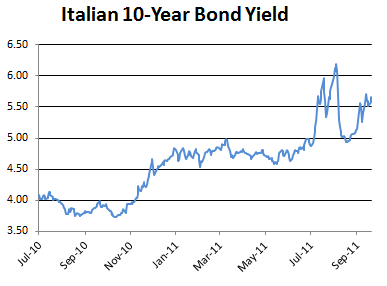 Last week, the European Central Bank settled €9.79 billion worth of sovereign bond purchases, down from 14 billion the week before. That is somewhat encouraging given that interest rates held steady despite the decrease in purchases. Nevertheless, yields remain at uncomfortably high levels, and without consistent ECB support, they would certainly be much higher.

Just as the ECB is providing support to European markets, in the US, investors are looking to the Federal Reserve for support. Wednesday's FOMC decision will be watched closely, with bulls hoping for more stimulus from the central bank.

The consensus is that the committee will begin what some have dubbed "Operation Twist," in which the Fed replaces the short-term Treasurys in its $1.65 trillion balance sheet with longer-maturity Treasurys. The expectation is that the FOMC will not announce a third round of quantitative easing (QE3) at this meeting.

If the Fed surprises with stronger action than expected precious metals will likely surge.

If the consensus is right, however, and the Fed initiates Operation Twist, precious metals may fall in the short term.

Stocks may break out to the upside. The S&P 500 has been testing the 1220 resistance level for several days now and looks poised to move higher. 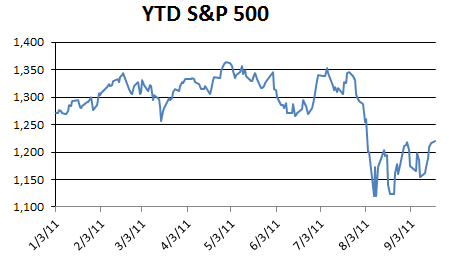 An upside breakout in stocks may reduce the safe-haven appeal of precious metals. But such a pullback may be a good opportunity to accumulate positions for the long term, as we have written before.

For gold, initial support lies at $1775/oz, which is the closing low put in at the end of August. But more significant horizontal support lies near $1720 and then $1700 — which is near the low registered following August's rapid 11-percent correction. Meanwhile, a double-top near $1900 stands as significant upside resistance.