END_OF_DOCUMENT_TOKEN_TO_BE_REPLACED

Pro-flation vs. counter-cyclical...
The COPPER/GOLD RATIO is saying something, writes Gary Tanashian in his Notes from the Rabbit Hole.
That something is that a cyclical, pro-inflation and thus pro-economic reflation metal has, in relation to gold, taken out two important simple moving averages (daily SMA 50 & SMA 200) and is currently riding the short-term EMA 20 upward. RSI and MACD are positive.
Copper: Pro-cyclical inflation, pro-reflation, pro-economy.
Gold: Counter-cyclical, monetary, with inflationary utility.
Given the right circumstances – like desperate monetary and fiscal policy, which are in play on the wider macro – gold will probably do quite well moving forward. But maybe, for a while, not as well as some other commodities if the Copper/Gold ratio really is up to something positive here. 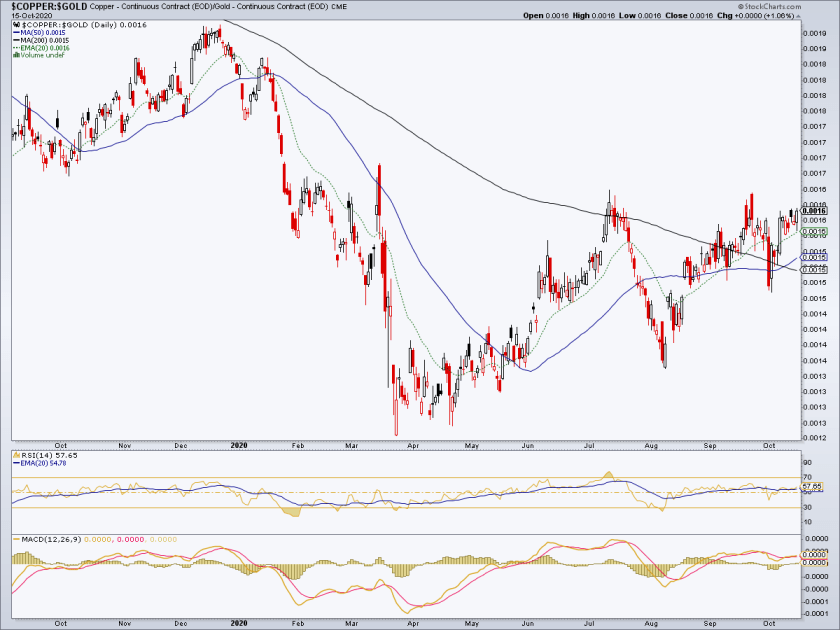 Side note: the Palladium/Gold ratio is on the verge of going positive as well. And of course, the daddy of inter-metal ratios, the Gold/Silver ratio is still on a big picture breakdown (meaning Silver/Gold has broken above a key long-term resistance marker).
So you might want to look at these three metallic indicators together (along with more traditional non-metallic inflation indicators) in gauging the process toward inflation.
If these metals continue their short-term out-performance to gold, it would be a strong indicator toward an inflationary 2021. If they break down then...well...move along, nothing to see here as the ginned-up-inflation-by-policy would have failed.
Back to Copper/Gold, the weekly chart shows resistance for the ratio directly overhead at the July and September highs. Will the 3rd try be a charm in breaking the indicator out to an inflationary 2021?
Stay tuned. But understand that if these ratios do start popping the macro is indicated to be going the way that politicians and central bankers want. That would be the inflationary way. 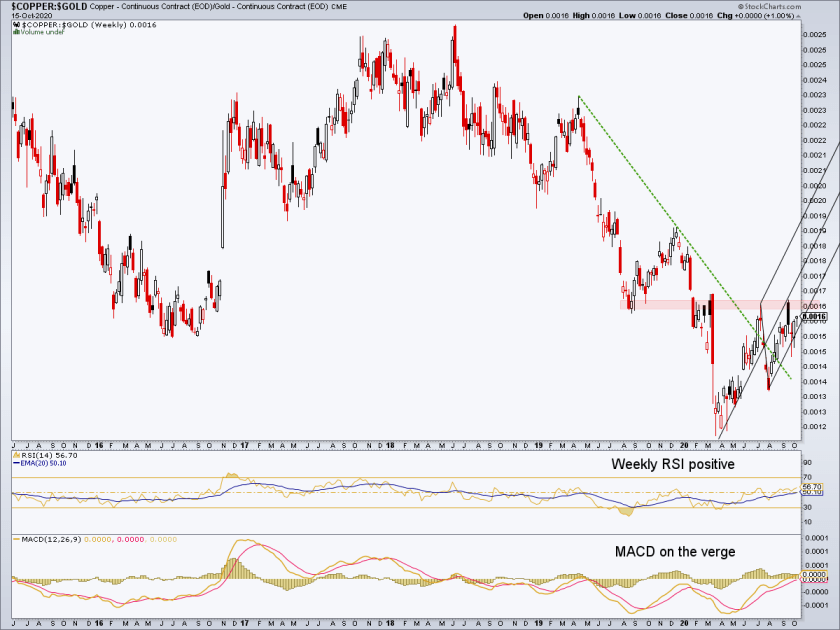 A projected inflation/reflation in line with the above can play out and still be seen in hindsight (or in our case, foresight) as a bounce within the Deflationary continuum against which our monetary and political policy heroes desperately battle with the only damn tool they know, inflation by (funny) munny printing and bond manipulation.
So says this bigger picture monthly chart of Copper/Gold. 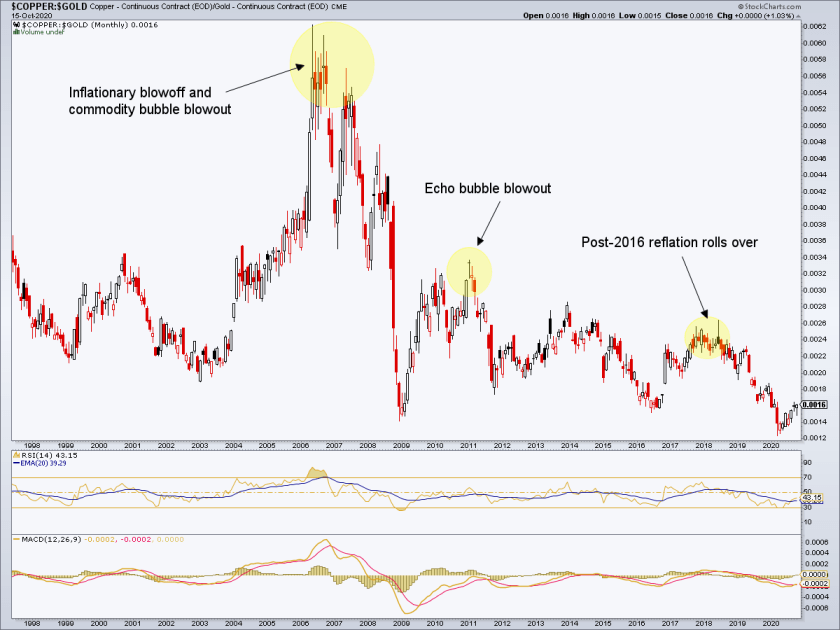 Whatever is ahead, make sure you interpret it through actual indicators and facts, not bias and hopes. I feel in my bones that NFTRH will be shifting from managing a successful 2020 that featured a deflation scare now morphing inflationary to a more obvious inflationary situation in 2021 that will start to gain some traction.
Hence 2020's investing successes would need to be altered, if not forgotten, in favor of new macro signals. On that note, check out a subscription to Notes From the Rabbit Hole if you'd like a macro guide (complete with stock selections in alignment with said macro) as the world turns.
BTW, some don't think indicators are subject to technical analysis concepts like support and resistance, but I do. It's just that the inputs that form ratio charts are noisier, busier and more plentiful. But they are there.