END_OF_DOCUMENT_TOKEN_TO_BE_REPLACED

Gold can look like just another commodity as the debt-ceiling finds a fix...
The CIRCUS from Washington has arrived on Wall Street, writes Greg Canavan in the Australian edition of The Daily Reckoning.
Stocks put in a big rally on the hope that politicians would achieve some sort of debt ceiling agreement. Both the S&P500 and the Dow Jones Industrials finished up a big 2.2% Thursday.
But after the market closed the New York Times came out with a story saying Obama had rejected the Republican proposal to extend the US' ability to pay its debt for six weeks, because it did not allow for the re-opening of many government services. Consequently US equity futures fall again.
Whatever...
Of course gold fell on the news of the supposed debt resolution and also fell on the news of the un-resolution. It's firmly in the hands of the hedge fund speculators right now, and they're having a pretty good time with it.
Gold has performed exactly the same as copper and oil since the start of the commodities bull market back in 2000. Our mate Dan Denning, author of The Denning Report, sends over a few charts showing the actual returns achieved.
It turns out that holding gold over copper would have only resulted in a few percent of advantage over the length of the bull market. As of yesterday, gold delivered a return of 315% versus copper's 308%. 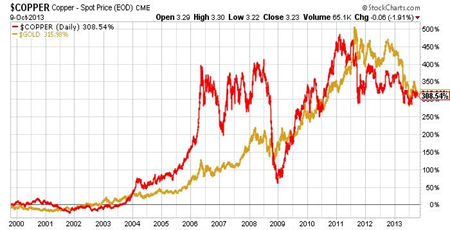 And oil beat gold easily, returning 352% over the 14 year time-frame. 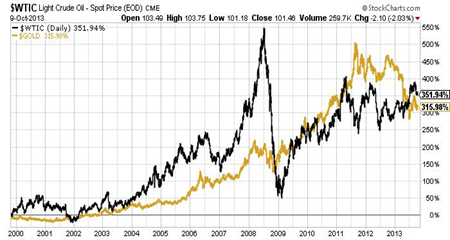 So gold is really just a rank and file commodity. Or at least it's performed like one for the duration of the commodities bull market.
But just because gold no longer plays the role of money (it's been 'de-monetised) since 1971, doesn't mean it's been commoditised for good. The derivative market may have done a pretty good job at 'commoditising' gold during the bull market, but it cannot change the inherent differences between gold and all other commodities.
That is, we humans don't consume gold like copper or oil or tin or wheat. Nearly all the gold ever mined is still in existence. It's out there somewhere. Consequently, gold has the highest stock-to-flow ratio of any commodity.
What we mean by that is the 'stock' of outstanding gold (somewhere around 175,000 tonnes) is huge compared to the annual 'flow' of the metal (around 2,500 tonnes). No other commodity could possibly have that characteristic. If copper had a similar stock-to-flow ratio to gold the copper production industry would be dead for decades while everyone waited for inventories to run down.
Given the performance of the gold miners, you could argue that the gold production industry is on its deathbed right now. And it could well be, but not for the reasons of 'oversupply'.
Theoretically, gold is always in oversupply because we don't consume it. The reason we don't consume gold is because in the mind of humans it's too valuable. Over many centuries, gold evolved as a store of wealth to protect people's savings from war, revolutions, inflation, currency blow-ups, poor governance...you name it.
For example, if you had a few excess Francs in the mid-1780s in France and you swapped those excess Francs for some gold, you would have managed to preserve your wealth throughout the revolution and the disastrous hyperinflation that followed it.
Or if you lived in the eastern part of Berlin as the Soviets advanced in 1945, the best you could do to preserve what wealth you might have had left would be to pocket some gold and head west.
You get the point. Gold is a wealth preserver through all sorts of crises...especially monetary. And we're in the throes of a monetary crisis right now. It may not seem like it, but it's brewing into something big.
You don't get politically induced debt arguments like we're seeing now in the US unless there are some major concerns with the way things are heading.
As we pointed out yesterday, the Chinese saw the writing on the wall years ago. They are now accumulating gold big time. A reader sent us this clip from CNBC last week which explains that there is rising anger amongst the Chinese people directed towards the government for putting all their eggs in the US Treasury basket. The correspondent said there were 'signs' emerging in China that the view towards the Treasury market was beginning to change.
We would argue that it began to change a few years ago. As much as we've been a critic of recent Chinese economic development, they do recognise (unlike most in the US it seems) that the current driver of global economic growth is not sustainable.
The US Congress will at some point raise the debt ceiling again. The question is, will the US' economic partners agree to easily absorb the increase in debt? China's actions over the past few years basically say no to that question. Japan has stepped up once again and helped the US out.
But its changing economic structure also indicates it may not be able to do so for much longer. In August, Japan's current account surplus fell to one of its lowest levels in years. It came in at just US$1.6 billion.
A current account surplus reflects a nation's excess production as well as income on accumulated savings. Japan has traditionally invested a large portion of its savings in US Treasuries. But if you stop accumulating savings and start to run down your wealth pile, that removes an important source of demand for the US Treasury market.
And Japan is now very close to becoming a 'dis-saver'. Which means the two largest creditors to the US, China and Japan, are lukewarm at best in support of the Treasury market. Against this back-drop, you have the political circus in the US doing even more damage to US credibility. Like they really need that right now...
You have two choices. You either believe that the world will continue to fund the US for years to come and that the system will go on working as it's always done...in which case you should buy stocks and sell gold.
Or you believe that the system is at its limits and it's no longer going to work as smoothly as it once did...in which case you should take out insurance with some physical gold and set it aside for a few years. Because if you're right, the wealth preserver throughout the ages will do its job again.