END_OF_DOCUMENT_TOKEN_TO_BE_REPLACED

Owning gold is more often the aim of accumulation, not the means, in China today...

THE COLLAPSE of Indian gold demand since the global financial crisis broke in 2007 might seem good reason to question the fundamental strength of gold buying worldwide today, writes Adrian Ash of BullionVault.

After all, if the world's No.1 gold buyers can't keep up with record-high Gold Prices, who can...?

But the plain fact, as BullionVault first forecast in spring 2009, is that China has overtaken India as the number one private gold buyer this year. The typical Chinese New Year gold rush has already begun (thanks in part to 3% discounts at major retailers), and robust demand looks likely to continue through 2010 if not beyond.

Full-year 2009 private demand in mainland China could outstrip India, the former No.1 buyer, by one quarter if not one third. Short of a (very unlikely) collapse in Q4 demand, full-year private gold buying – including jewelry and retail investment – is set to have grown 10% from 2008's record in volume terms, rising 26% by value to equal $13.5 billion or more.

On recent trends, that would equate to more than 2.0% of China's famously massive household savings (up from 1.0% ten years ago) and account for almost one ounce in every eight sold worldwide. 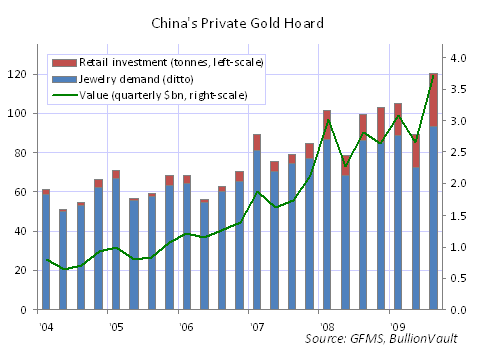 Basis the GFMS consultancy's data (published by the World Gold Council), physical gold purchases by mainland Chinese households in 2009 was already running 19% ahead of India's private demand for Q1-Q3.

Given China's continued economic growth (certain to hit Beijing's 8% target according to the Chinese Academy of Social Sciences) – let alone the surge in money-supply and credit growth over and above GDP (put at 23 and 27 percentage points respectively by Deutsche Bank) – private gold consumption in Q4 most likely remained very robust. Whereas India's private gold off-take during Oct-Dec. continued to shrink in the face of record-high prices. Indian bank and wholesale dealers have reported below-market bids from their clients throughout the autumn. Comments from the Bombay Bullion Association put Q4 imports 54% lower from 2008's already disastrous finish.

India's private demand, in contrast, ran 45% below 2008 levels during the first 9 months of the year, most notably depressed during Q1 (down 83% from Q1 08, with Indian investors becoming physical dis-hoarders on GFMS's data; overall, India was a net exporter of gold for the first time since the Depression according to market historian Timothy Green). Applying the 5-year average ratio of Q4 demand to Q1-Q3 figures (27% added to 264 tonnes), full-year private off-take would come in at 336 tonnes, the lowest total since at least 1991 on GFMS's data.

India's full-year imports (it has virtually no domestic mining output) are forecast at 370-380 tonnes says the Bombay Bullion Association. They have not been below 400 tonnes per year since at least 1997 according to the Indian Bullion Market Association.

It is impossible to predict the outlook for gold-buying in mainland China next year, but this decade's drivers for Western gold investment – credit excess and miserable returns to cash – also apply in China, with bells on.

The People's Bank cut its benchmark rate from 7.5% to 5.3% in Dec. 2008, and has left it there since. Inflation in the cost of living was officially reported at minus 1.1% across the first 3 quarters, but real rates were negative in H2 2004 and again in at the turn of 2007-8. Some analysts are forecasting 4.0% inflation for 2010, and either way, commercial rates have been so attractive this year that new credit growth was CNY295 billion in Nov., equal to $43 billion. That was down from 2009's monthly average of $130bn, but took full-year credit growth to the equivalent of $1.35 trillion, equal to 27% of GDP.

Pitched against this rampant credit excess, gold's quasi-religious and auspicious appeal in Chinese culture – as a solid, tangible, intrinsically valuable store of wealth – will only have grown. Most significantly, and in sharp contrast to Indian demand, private Chinese buying has grown as the price has risen (gold has than tripled against the Yuan since retail price controls were lifted in 2001).

That might suggest gold is just another bull-market asset for China's increasingly wealthy and capital-rich middle classes. But owning the metal is most often viewed more as an end-in-itself than as an investment vehicle; it's the aim of accumulation, not the means.

Given this last decade's average 15% annual gains for US-Dollar investors – plus the outlook for sub-zero real interest rates, struggling equity dividends, and the danger of sharply higher bond yields (i.e. falling bond prices) as the Treasury attempts to finance a new record deficit – might the Chinese approach to Gold Investment start to take hold in the West...?

Please Note: A version of this article first appeared in the Financial Times' China Confidential