END_OF_DOCUMENT_TOKEN_TO_BE_REPLACED

China's problems are deep-rooted, and will take years to play out...

PERCEPTIONS about China have changed, writes Greg Canavan at the Daily Reckoning Australia.

But China remains stuck with the same problems they had a few months ago. That is, the need to rebalance a historically imbalanced economy.

Let's go back to the official PMI index. Here's a chart showing the index's performance over the past three months, along with the sub-components. As you can see, the PMI, which is a composite index, came in at 49.2 in August, 49.8 in September, and 50.2 in October. While that signifies mild improvement, many of the sub-indices remain below 50...in other words, still contracting. 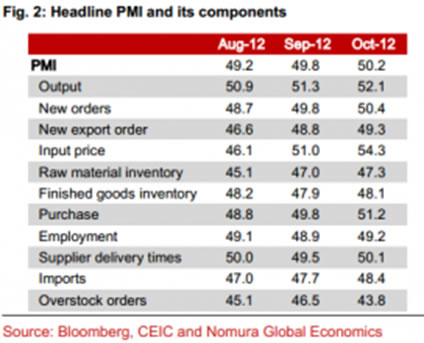 The HSBC PMI, which is more a reflection of the experience of China's private sector rather than the larger State Owned Enterprises, paints a weaker picture (see red line in chart below). But the chart clearly shows recent improvement, and that's what the market is getting excited about.

But we don't expect this improvement to last. China's economy is in its post credit bubble adjustment phase. It's still early days in China's economic rebalancing. So don't take this 'improvement' to suggest that China's problems are over. This theme has years to play out. 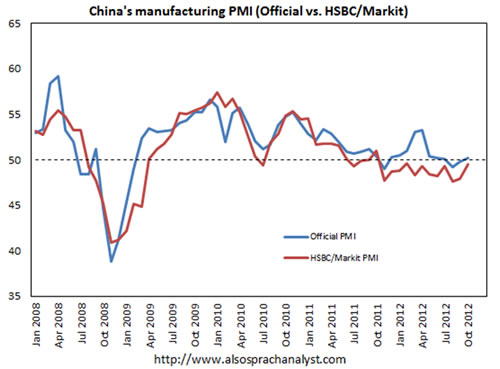 'Because of the serious imbalances China is much more like Japan in the late 1980s, with the major difference being that Japan never took debt, investment and consumption imbalances to anywhere near the levels that China has taken them'

For a more detailed comparison between China and late 1980s Japan, check out this BBC article.

The paper also quotes BHP divisional head Alberto Calderon as saying 'The physical iron ore demand of China will go down. That high end of the cost curve will disappear.'

Calderon doesn't expect this to happen until next decade. We reckon he's being a little optimistic. China's inevitable economic adjustment will ensure it tapers off much quicker than most industry forecasters expect.

He also said BHP will focus on investing outside Australia. The reason? Australia's high cost of doing business...an unpleasant side effect of China's credit bubble now flowing through the Aussie economy.

'As an example of high costs in Australia, he cited the case of a truck driver's wages in the Pilbara, which he said were $125,000 a year compared with $75,000 in the US. "You have a 60 per cent cost disadvantage in the hiring of a truck driver", he said.'

Like all credit bubbles, the China boom left a trail of destruction in the form of mal-investments. That extends to huge (and unsustainable) iron ore profit margins and $125,000 per year truck drivers. (No offence to truck drivers, there's plenty of other examples...bankers, CEO's, real estate agents, investment newsletter writers...)

The final stages of China's credit boom (2009-2011) left Australia with an inflationary wealth mirage. Deflationary episodes usually follow inflationary booms. So the question is...are we headed for a deflationary conclusion to the bubble in 2013?

Get the safest gold at the lowest prices on BullionVault...