END_OF_DOCUMENT_TOKEN_TO_BE_REPLACED

Don't worry about the gold price, says this Western analyst. China's got your back...
I DON'T want to say that mainstream analysts are stupid when it comes to China's gold habits, writes Jeff Clark, senior precious metals analyst and editor of Big Gold at Casey Research.
But I did look up how to say that word in Chinese...
One report claims, for example, that gold demand in China is down because the Yuan has fallen and made the metal more expensive in the country. Sounds reasonable, and it has a grain of truth to it.
But as you'll see below, it completely misses the bigger picture, because it overlooks a major development with how the country now imports precious metals.
I've seen so many misleading headlines over the last couple months that I thought it time to correct some of the misconceptions. I'll let you decide if mainstream North American analysts are stupid or not.
The basis for the misunderstanding starts with the fact that the Chinese think differently about gold. They view gold in the context of its role throughout history and dismiss the Western economist who arrogantly declares it an outdated relic. They buy in preparation for a new monetary order – not as a trade they hope earns them a profit.
Combine gold's historical role with current events, and we would all do well to view our holdings in a slightly more "Chinese" light, one that will give us a more accurate indication of whether we have enough, of what purpose it will actually serve in our portfolio, and maybe even when we should sell (or not).
The horizon is full of flashing indicators that signal the Chinese view of gold is more prudent for what lies ahead. Gold will be less about "making money" and more about preparing for a new international monetary system that will come with historic consequences to our way of life.
With that context in mind, let's contrast some recent Western headlines with what's really happening on the ground in China. Consider the big picture message behind these developments and see how well your portfolio is geared for a "Chinese" future...
#1. "Gold Demand in China Is Falling"
This headline comes from mainstream claims that China is buying less gold this year than last. The International Business Times cites a 30% drop in demand during the "Golden Week" holiday period in May. Many articles point to lower net imports through Hong Kong in the second quarter of the year. "The buying frenzy, triggered by a price slump last April, has not been repeated this year," reports Kitco.
However, these articles overlook the fact that the Chinese government now accepts gold imports directly into Beijing.
In other words, some of the gold that normally went through Hong Kong is instead shipped to the capital. Bypassing the normal trade routes means these shipments are essentially done in secret. This makes the Western headline misleading at best, and at worst could lead investors to make incorrect decisions about gold's future.
China may have made this move specifically so its import figures can't be tracked. It allows Beijing to continue accumulating physical gold without the rest of us knowing the amounts. This move doesn't imply demand is falling – just the opposite.
And don't forget that China is already the largest gold producer in the world. It is now reported to have the second largest in-ground gold resource in the world. China does not export gold in any meaningful amount. So even if it were true that recorded imports are falling, it would not necessarily mean that Chinese demand has fallen, nor that China has stopped accumulating gold.
#2. "China Didn't Announce an Increase in Reserves as Expected"
A number of analysts (and gold bugs) expected China to announce an update on their gold reserves in April. That's because it's widely believed China reports every five years, and the last report was in April 2009. This is not only inaccurate, it misses a crucial point.
First, Beijing publicly reported their gold reserve amounts in the following years:
Prior to this, China didn't report any change for over 20 years; it reported 395 tonnes from 1980 to 2001. There is no five-year schedule. There is no schedule at all. They'll report whenever they want, and – this is the crucial point – probably not until it is politically expedient to do so.
Depending on the amount, the news could be a major catalyst for the gold market. Why would the Chinese want to say anything that might drive gold prices upwards, if they are still buying?
#3. "Even with All Their Buying, China's Gold Reserve Ratio Is Still Low"
Almost every report you'll read about gold reserves measures them in relation to their total reserves. The US, for example, has 73% of its reserves in gold, while China officially has just 1.3%. Even the World Gold Council reports it this way.
But this calculation is misleading. The US has minimal foreign currency reserves – and China has over $4 trillion. The denominators are vastly different.
A more practical measure is to compare gold reserves to GDP. This would tell us how much gold would be available to support the economy in the event of a global currency crisis, a major reason for having foreign reserves in the first place and something Chinese leaders are clearly preparing for.
The following table shows the top six holders of gold in GDP terms. (Eurozone countries are combined into one.) Notice what happens to China's gold-to-GDP ratio when their holdings move from the last-reported 1,054-tonne figure to an estimated 4,500 tonnes (a reasonable figure based on import data). 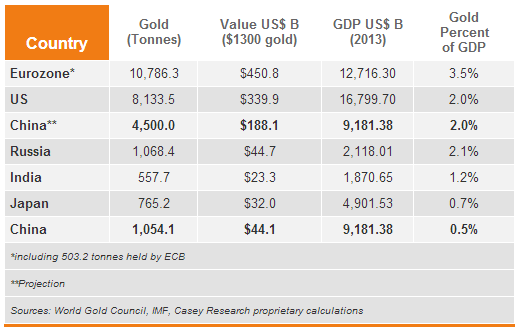