END_OF_DOCUMENT_TOKEN_TO_BE_REPLACED

How China's $14 trillion stockmarket got 30% smaller in 3 weeks...
The SHEER size and importance of China's equity markets cannot be overstated, writes Frank Holmes at US Global Investors.
Second in size only to the New York Stock Exchange, the combined value of the Asian country's stock markets, according to the Wall Street Journal, is $14 trillion and change.
Or at least it was in May, a month before markets fell more than 30%. The Shanghai Composite Index alone gave up $2 trillion in value. To put this in perspective, the gross domestic product (GDP) of debt-troubled Greece is around $200 billion.

So how did this happen? The answer has a lot to do with the quantity and quality of investors.
In most major economies, stock markets trading is dominated by professional money managers.
But in China, between 80 and 90% of the domestic A-share market is made up of retail investors, many of them novices who sought to participate in the yearlong bull run. An eye-popping 40 million new brokerage accounts were created in the one-year period ended in May.
The Communist Party, by comparison, gained only a little over one million new members in the same period. At the peak, accounts were being added at a rate of over three million per week. 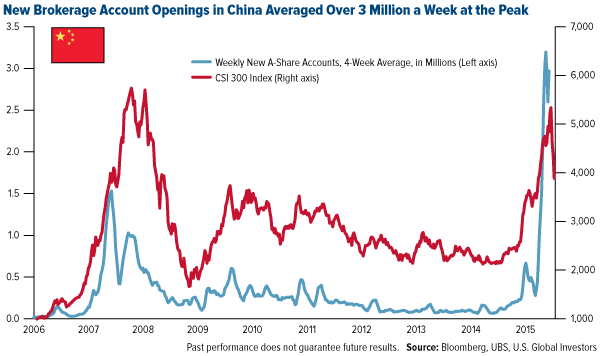 For many of these first-time or relatively inexperienced investors, the price of entry was margin lending. Cosmic amounts of it. Near the end of June, 2.08 trillion Yuan ($335 billion) worth of borrowed funds flooded the Shanghai and Shenzhen markets. Margin lending as a percentage of total market cap rose to as high as 20%. In the US, it's about 2.5%. 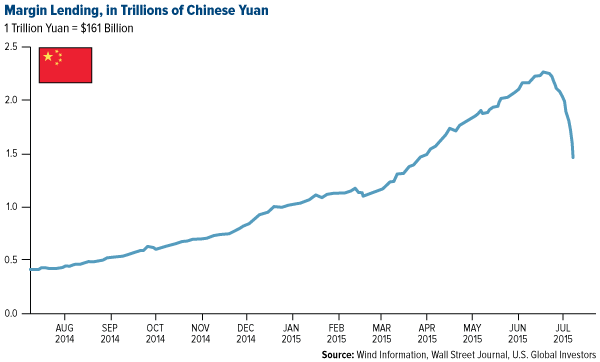 This combination – millions of new accounts mixed with unprecedented leveraging – greatly contributed to the selloff. As you can see above, this leverage is now unraveling as investors are forced to sell in order to meet margin calls.
Beijing has responded with a host of measures to prevent the market from sliding any further, one of the most significant being a ban on huge institutional shareholders from selling until the Shanghai Composite rises above 4500. As of this writing, it's just above 3800 after breaking a three-day rally.
The good news is that some analysts believe the worst might be behind us. Financial services firm UBS takes the position that, as massive as the correction was, it shouldn't have a "major" economic impact.