END_OF_DOCUMENT_TOKEN_TO_BE_REPLACED

Buying gold in July or August only failed to pay once by year's-end since this bull market began...

Widely recommended as it continued to win, the position delivered 22% gains between end-March and end-June, and it looked closely held as Q2 finished, no doubt so funds could highlight it in their quarterly client reports.

Since July 1st, in contrast, a lot of recent inflows to gold are going to be asking whether the summer's drop-to-date is just a dip, a seasonal lull, or the beginning of the end for gold's 10-year bull market.

We'd split the difference, and see what's behind that curtain in the middle. 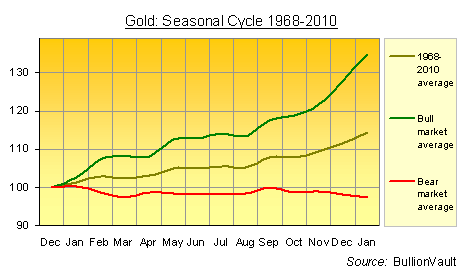 Yes, the summer lull has arrived later than usual. Since 1968, only 2005 saw June set a new high for the year (daily basis; the chart above tracks month-end prices).

And yes, there's reason to doubt one key driver of gold's seasonal cycle – Indian consumer demand. Its own seasonal shape – led by weddings, festivals and the intervening pre-harvest lull – must have less impact on global Gold Prices as Kerala's farmers weigh ever-higher Rupee prices per 10 grams.

But for Dollar investors, since this bull market began a decade ago, buying gold in July or August has only failed once to deliver a gain by year's-end. The 2008 low came at end-Oct. The rest of the time, Sept. worked like a starting gun for strong gains in gold. 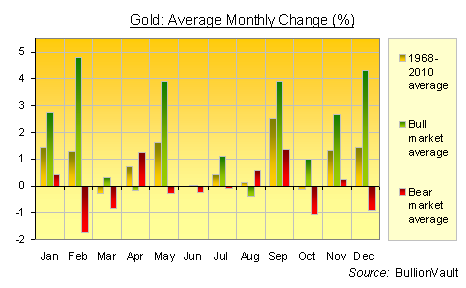 Does the second-half of 2010 have to play out to script? Of course not.

But even if the bull market is over (which looks unlikely what with global interest rates at zero, let alone with fresh monetary mayhem ahead), even a bear-market fillip would give July's buyers the chance to get out for a profit by the end of September.