END_OF_DOCUMENT_TOKEN_TO_BE_REPLACED

How your extra taxes could wind up in Warren Buffett's pocket...

LAST WEEK President Obama released his $3.8-trillion budget for fiscal year 2013. His budget calls for new taxes on the wealthy, a restructuring of the tax code, and short-term infrastructure spending aimed at boosting the economy (albeit artificially), writes Robert Ross for Casey Research.

Also included in the budget are limitations on subsidies for oil and gas companies, an end to the Bush tax cuts, and a proposal to raise taxes on dividends, which could be as high as 39.6% for households making over $250,000 per year.

Although Senate Minority Leader Mitch McConnell (R-KY) dismissed the proposal as "a campaign document," the White House claims the measure would generate $206 billion in revenue over 10 years.

One of the most interesting aspects of the plan is the inclusion of the Buffett Rule as a replacement for the alternative-minimum tax (AMT).

The AMT was originally implemented to ensure that high-income Americans paid their taxes. But, alas, the geniuses in Washington "forgot" to index the AMT for inflation, rendering it useless and unintentionally ensnaring an increasing number of middle-class taxpayers into a system meant for the wealthiest of Americans.

Unintended consequences abound, but I digress...

The "Buffett Rule," named after famed investor Warren Buffett, would require those who earn more than $1 million per year to pay a tax rate of at least 30% and prevent them from claiming deductions to push down their tax rates.

Buffett, who penned a New York Times op-ed in August of last year espousing the need for an overhaul of the tax code for America's top earners, appears to have caught the ear of President Obama. 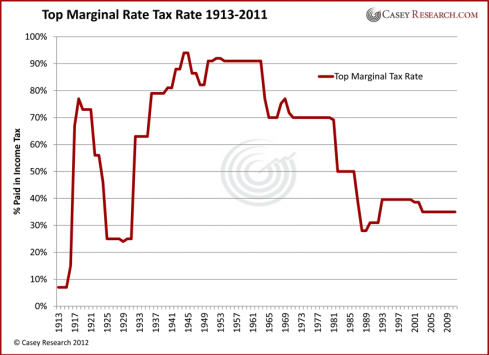 The message of the op-ed was clear: Mr. Buffett, who paid nearly $7 million in income tax last year, wants to pay more.

But will he actually sacrifice anything? It's hard to say, as some of these new taxes will directly benefit Buffett.

Additional tax Dollars in the government's coffers could help Buffett even more. Who can forget the Oracle of Omaha's opportunistic investment in Goldman Sachs (NYSE: GS) in the wake of the Lehman Brothers collapse (where he made nearly $1 billion on the assumption that the government would bail it out)? Buffett has indicated that his next acquisition could be Exelon (NYSE: EXC), General Dynamics Corp (NYSE: GD), or Archer Daniels Midland (NYSE: ADM), all of which are heavily connected to government contracts and would benefit from increased government spending.

Exelon is directly tied to the Obama administration: Rahm Emanuel and David Axelrod act as consultants, two top Exelon advisors are Obama fundraisers, and the company lobbies heavily for more greenhouse-gas restraints to drive demand for its nuclear power.

General Dynamics, the world's fifth-largest defense company, generated 72% of revenue from the Department of Defense in 2011, and was the number-four government contractor for fiscal year 2011.

Last but certainly not least, ADM, one of the world's largest processor of agricultural commodities, profits not only from ethanol subsidies but from corn syrup and export subsidies as well.

Although no one can be sure of Buffett's motives, it would be naïve to believe that someone as intelligent as Buffett has not considered the benefits of pushing through this tax structure. Higher taxes are always problems for entrepreneurs and regular people in the economy. However, they're often beneficial to the well-connected, who receive government bailouts and favors. And with Buffett even on the president's lips, he is becoming more connected to the power mechanism in D.C. every day. With many of Berkshire's companies, your loss as a taxpayer will be their gains.

Buy the safest gold at the lowest possible price through BullionVault...