END_OF_DOCUMENT_TOKEN_TO_BE_REPLACED

Buoyant house prices, a rising cost of living, and a clear policy of currency devaluation...

When I asked him about housing prices locally, he said they've been rising all year. In fact, they're now breaking the records set in the great housing boom that ended in 2007.

"The London real estate bubble, arguably the biggest one of all, still hasn't popped," wrote the Wall Street Journal two months ago.

My friend trades derivatives for a living in the City. With house prices rising, I figured the confidence must have returned to his trading floor.

But no. "It's weird," he said. "The trading floor is quiet. It's like a lot of traders are passing time and there aren't many deals being done."

How could house prices be rising and my friend's trading floor be sluggish at the same time? I have an explanation:

The British government is devaluing the currency

In terms of debt, Britain is in the same position as Greece, Spain, Portugal, and Ireland. It's broke and struggling to pay back what it owes. There's one difference. Britain has its own currency, and unlike these other European countries, the British government can intentionally devalue this currency in order to ease the pain of Britain's recession.

For one thing, a cheaper pound makes British goods cheaper for foreigners, so British factories have more work and more tourists come to Britain. It also makes British debt more manageable. Debtors can pay back their debts in devalued currency. It's like borrowing an ounce of gold and being allowed to pay it back with an ounce of silver.

Britain's already implemented this strategy. Right now, the British currency, the Pound Sterling, is near its lows of the last 20 years against the Dollar and the Euro, and there's no sign it's going to stabilize. 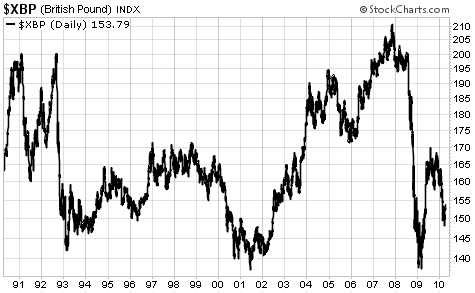 This "devaluation" policy is making the prices of basic goods and services rise.

I was last home in London in early 2007. One thing I've noticed since then is how prices for basic items like food, drink, newspapers, gasoline, public transportation, and cigarettes have soared. These items seem to have gained almost 25% in price in three years.

While devaluation is causing prices of basic goods and property to rise, it's not generating true economic activity. This is why my friend's trading floor is still quiet.

Currency devaluation is one of the oldest tricks in the government economic "hand book". Take the 1990s as an example. The Mexicans, Brazilians, Argentines, Russians, and several Asian countries used currency devaluation to ease debt burdens.

If I were still living in Britain right now – or any other country intentionally devaluing its currency – I'd convert some of my savings into US Dollars, and I'd also buy a few Gold Coins, too.

Want Physical Gold but without the 5% dealing fees? Start with a free gram of gold at BullionVault now...