END_OF_DOCUMENT_TOKEN_TO_BE_REPLACED

Instead of encouraging savings, the British government is pilfering them through inflation...

GOVERNMENT policy sometimes appears to be devised on the hoof – and abandoned just as quickly if it proves unpopular. So you could be forgiven thinking that nobody in charge is looking more than a short time ahead, writes Simon Rose of Save Our Savers.

"Let's just get through the next choppy bit," seems to be the attitude, "And if we keep our fingers crossed, everything will probably turn out all right."

Fortunately, we in the UK have the Office for Budget Responsibility, set up last year to provide independent economic forecasts. Its first Fiscal Sustainability Report examines whether UK public finances are sustainable over the long term. It makes for uncomfortable reading.

They use figures from the Office for National Statistics, which show that the proportion of the population aged 65 or over will increase from around 17% to roughly 26% in 2061. As a result, the OBR points out, state spending on public health, state pensions and social care will mushroom over the next 50 years.

Without a change of policy, they predict that the budget deficit will worsen and put public sector debt on "a continuously rising trajectory as a share of national income. This is clearly unsustainable." Substantial extra tax increases and spending cuts will be needed within a few years or Britain will be in serious trouble.

The debt situation is hardly healthy now. Looking into the economic aftermath of the credit bubble, the McKinsey Global Institute finds that when private debt is added to that of the public and financial sector, Britain (represented by the orange line below) is the world's most indebted "mature" economy, way ahead of the problematic Eurozone countries. 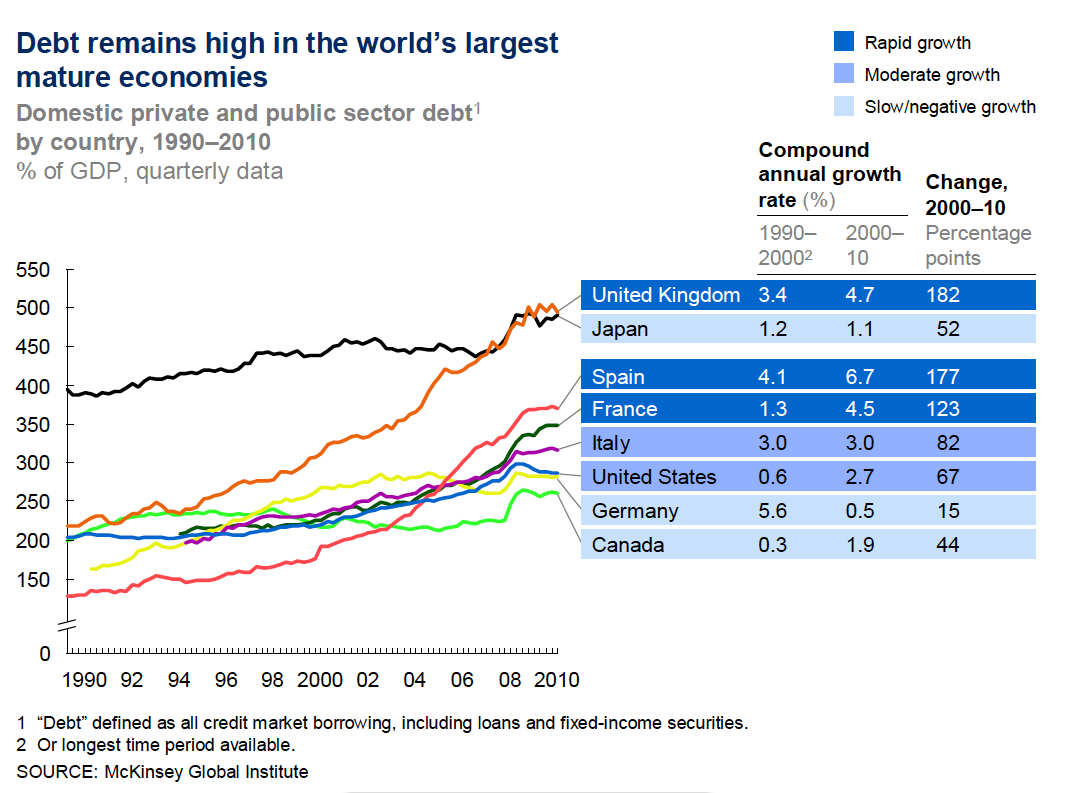 Debt is a serious problem at the individual level too, of course. The same McKinsey report shows total UK household debt as a proportion of GDP climbing 32 percentage points from 2000-2008.

From then until 2010, it fell by just ONE percentage point. The recent Debt & Household Income Report from the Consumer Credit Counselling Service finds that there are currently 6.2 million vulnerable households, 4.3 million of which have low or no savings. The report found "a clear link between debt vulnerability and levels of savings".

A startling reality check is overdue. After a decade of trying to grow the economy on foundations of debt the cupboard is bare. Instead of encouraging savings, the British government has turned to its old, crooked friend inflation, allowing it to pick the pockets of those with savings.

This has the makings of a circle that could become truly vicious. Lower savings will lead to greater dependency, which will push the tax burden even higher and impoverish the older generation, making them still more heavily dependent upon the state. And, of course, the greater the tax burden, the less people will be able to save.

The solution is surely a sound, healthy – and growing – economy. For that, we need the confidence, imagination and verve of the country's entrepreneurs and businessmen and women. But they cannot build or grow businesses without capital. And to provide capital, a country needs savers.