END_OF_DOCUMENT_TOKEN_TO_BE_REPLACED

That's right; an investor must pay the Swiss government for lending it money...

"The WORLD has much to fear," James Grant declares in a recent issue of Grant's Interest Rate Observer, writes Eric Fry from Laguna Beach, California for The Daily Reckoning.

"However, it seems to us, not the least of these perils are the alleged safe havens themselves."

Specifically, Grant is bearish on one of the very "safest" of safe things: highly rated government bonds. "The times may be troubled (they often are)," he says, "and people may be desperate (someone usually is), but that doesn't mean that low-yielding sovereign debt is the last word in safety and soundness."

Grant does not assert that top-tier government bonds are necessarily unsafe, merely that they are undesirable...and potentially unsafe. At current yields, many government bonds offer what Grant has termed, "return-free risk".

As the nearby chart clearly shows, the yields provided by the marquee AAA government bonds of the US, Germany, Switzerland and the UK have been in a freefall for several years. As recently as four years ago, a 5-year bond from the Swiss government yielded about 3%. Today, the 5-year yield is negative! 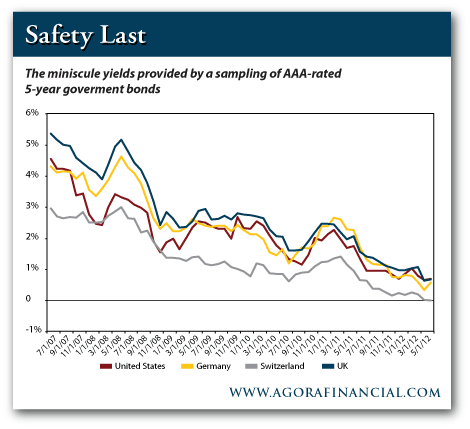 That's right; an investor must pay the Swiss government for the privilege of lending it money.

The 5-year yields provided by the other AAA issuers in this chart are at least positive, but just barely. All of them yield less than one percent per year before inflation. Longer-term yields from these AAA-rated governments are similarly underwhelming.

Therefore, Grant suggests, rather than buying the 10-year German bund that yields a whopping 1.75%, why not buy the common stock of the German chemical giant, BASF, which is currently yielding about 4.3%?

"By the same token," Grant continues, "we favor Wal-Mart over the 10-year Treasury, and Nestlé over the 10-year Swiss government note. Wal-Mart, which yields 2.4%, and Nestlé, which fetches 3.5%, have shown the ability to grow and adapt in economies both good and indifferent."

Clearly, the shares out of BASF, Wal-Mart and Nestlé are not "safe" in the sense of providing a certain, government-guaranteed return. They are safe only in the sense of offering a potential return over time that greatly exceeds that of today's ultra-low yielding sovereign bonds. Furthermore, equities deliver returns that derive from real-world commerce, rather than from the increasingly dubious promise of a heavily indebted national treasury.

But equities are not the only compelling alternative to government bonds, according to Grant. He argues that the "risky" housing market is on the verge of providing very compelling investment opportunities – both for current income and for capital gain.

"In so far as houses have been a ball and chain on the leg of the American economy," Grant remarks, "that leg is – so we believe – in the process of shedding its shackles."

Regular readers of this column may recall that Chris Mayer, editor of Capital and Crisis here at Agora Financial, has also become a big fan of US housing-based investments. (In fact, Chris identified one particular housing-focused partnership that Jim Grant subsequently examined in the pages of Grant's Interest Rate Observer. Out of respect for Grant and Mayer's subscribers, we will not divulge the specific real estate investments that either publication has highlighted.)

"Being bullish on housing is a contrarian view," says Chris. "In a recent national survey, 37% of homeowners say they think buying a house is a 'risky investment'. And 86% think prices will either stay flat or fall."

But Chris believes the housing doom-and-gloomers have got it wrong. He thinks the housing market is on the verge of a rebound. "Real estate is intensely local, of course," says Chris.

"It is hard to generalize. But clearly, there is value out there.

"One individual I know runs a partnership that has purchased 87 homes in Georgia and North Carolina during the last year. When he leases out these homes, his firm averages a 16.5% gross yield. That's annual rent divided by purchase price, plus closing costs and estimated repair costs. And that is without leverage, net of all expenses, and includes estimates for vacancy and maintenance.

"This is what the big-picture guys miss," Chris continues. "Economists can talk all they want about how a housing recovery is years away. Maybe so, but the opportunity to invest and make good money is now. In a world of sub-2% Treasury rates, 16.5% gross ain't bad.

"Now, I am not saying a housing boom is about to happen," Chris concludes. "There is more wood to chop before we get there. But I am saying that American housing, as an investment asset, looks cheap."

"Bye-bye, then, to the McMansion phase of the American home investment cycle," echoes Grant, "Hello to the era of McBargain."

Looking to Buy Gold for your investments or savings today...?