END_OF_DOCUMENT_TOKEN_TO_BE_REPLACED

Monday this week marked the biggest move in US bond yields since Black Monday two decades ago...

DO YOU REMEMBER how inflation was the investment world's biggest single worry back in...oh...well, back in June this year?

Anyone snapping up 10-year US Treasury bonds back then is now looking clever. Very. Ten weeks ago, the 10-year yield touched a half-decade high of 5.32%. On Monday night in New York it closed below 4.65%.

That jump in longer-term bond yields equals more than two baby-steps along the hard stony path of central bankers stumbling from rate-hiking to rate-cutting as the financial markets slump. Monday this week in fact marked the biggest cut in short-term bond market rates since Black Monday 1987. 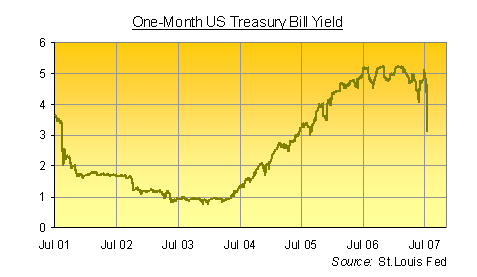 This summer's flood of money into the "safe haven" safety of government debt has hit a record pace. Three-month US Treasury bills ended Monday yielding just 3.09%, down by 0.66% for the day and the sharpest fall since the stock market crash of October '87. Now the futures market is unanimous in pricing in a cut in US interest rates next month.

"The problem in the credit market is far from over," says Kornelius Purps, the beautifully-named fixed-income strategist at Unicredit Markets & Investment Banking in Munich. "Yields at the short end are plunging. Speculation is growing that the Fed will cut in September, if not before."

Oh really? Oh yes! Only a "calamity" would cause the Fed to cut rates before its meeting on Sept. 18th, said William Poole, head of the St.Louis Federal Reserve Bank last Thursday. Even as he spoke, however, the true rate of interest charged to Wall Street's investment banks by the Fed in New York had dropped half-a-per-cent BELOW the official target rate.

Then, the following morning – and just ahead of the Wall Street open – the Fed slashed its primary discount rate from 6.25% to 5.75%, urging the biggest commercial banks to borrow early and often. Paul McCulley at Pimco, the world's biggest fixed-income investment fund, told Bloomberg yesterday that the Fed's move "was textbook, beautiful central banking."

But then, as a man whose funds rise in value when interest rates fall, he would say that, wouldn't he?

The key to defeating an incipient panic, said Walter Bagehot in the classic Victorian text Lombard Street, is to "either shut the bank at once, and say it will not lend more than it commonly lends, or lend freely, boldly, and so that the public may feel you mean to go on lending."

Let's be in no doubt. The US Fed means to go on lending...freely and boldly...just as prescribed. Bill Poole's calamity has now come to pass, at least in the eyes of Ben Bernanke and his team at the Federal Reserve in Washington. Given that you and I can't borrow from the Fed's discount window, however, what might this calamity mean for us poor savers, borrowers and investors?

Well, in Europe already this week, financial companies have failed to refinance all the asset-backed commercial paper (ABCP) that is now maturing. Forgive the alphabet soup, but this might just prove important. ABCP "started modestly as a way for banks to move assets off their balance sheet," explains The Banker. Financial firms issue short-term ABCP, and use the cash raised to fund longer-term investments including mortgages and bonds, Bloomberg adds.

And yesterday, says Saher Bin Jung – a commercial paper trader at Commerzbank in London – only around half of the ABCP notes that matured were re-sold. Data from Dealogic goes further. It says that 80% of Monday's ABCP issuance failed to find buyers...nearly $5 billion worth of debt.

Does this matter to you? It might do if you want to re-mortgage your home, buy a new car, or raise extra funds to grow your own business any time soon. Even as the US Federal Reserve – the world's biggest central bank – tries to wind back the clock on the greatest bubble in debt ever seen, the financial markets themselves remain choked. ABCP provides a big chunk of the cash that winds up on Main Street as new home loans, auto-finance and other end-user loans.

And if Europe's biggest financial firms cannot refinance their loans, even with bond yields sinking, what hope for the world's mergers & acquisition frenzy, too?

For larger investors and those retirees lucky enough to be finished with debt and long only of choice, the smart move in hindsight seems clear. But maybe it's now been and gone.

You could have picked up more than 5% yield from the 10-year US Treasury bond in mid-June. Now yields are sinking...and the Bernanke Fed is expected to cut its target interest-rate at its Sept. meeting or before.

If the Fed demurs, bond prices will spike lower – and any "Bernanke Put" assumed by stock-market investors will be found to expire worthless. If the Fed does indeed choose to cut rates, on the other hand, investors in both bonds and stocks would do well to remember:

Inflation was the investment world's greatest single concern only 10 weeks ago.

Where to put your money when inflation looms even as interest-rates fall? To read an in-depth report on how the Gold Market really works now, click through to download this 16-page PDF: