END_OF_DOCUMENT_TOKEN_TO_BE_REPLACED

Bitcoin 'to da moon!' is slaying Google searches to 'buy silver'...
QUICK! Can you name this asset? asks Adrian Ash at BullionVault.
There's not a moment to lose...
Bitcoin, right? Here in 2017, yes – crypto currencies rock.
But roll back a bit, even as recently as 2016, and this was a different thing altogether.
No, not gold. Not quite, and not even with a decade of gains from 2001-2011 plus forecasts of $5,000 to $10,000 per ounce from there.
No, the one-time crypto currency...at least as far as the bug-o-sphere of "to da moon!" claims and promises would say...used to be silver.
Which might help explain why silver investment demand has sunk as Bitcoin has swamped financial headlines, blogs, click bait and junk mail this year.
Whatever Goldman Sachs thinks, gold could be next. Google searches for 'buy bitcoin' just overtook 'buy gold' after crushing ' buy silver' earlier this year.
But somehow we doubt it. First because gold is boring anyway...a hedge against the risk and runaway dreams of your other investments. Second because gold never quite got the extra retail investment push which silver's "stunning...outrageous" forecasters promoted.

Trumping anything silver ever enjoyed, Bitcoin "to the moon!" forecasts have broken out of the specialist forums online and gone mainstream.
"People are underestimating Bitcoin," reckons PayPal founder, early Facebook investor and all-round internet squillionaire Peter Thiel. "Bitcoin is better than gold," reckons Apple Inc's co-founder Steve Wozniak.
Silver's narrative in contrast – on solar panels, Chinese demand and the looming currency 'reset' – has all moved on since silver doubled inside 6 months and then slipped and fell over 70% from Spring 2011.
Even then it found new cheerleaders to tell potential investors just how soon silver would make them rich, if only they bought today, right now, this instant.
Claims of price suppression (aka manipulation) are still with us, of course, plus the bug-o-sphere's gloomy end-times outlook for a collapse of the almighty Dollar. That will see precious metals surge, any day now...just you watch...led by the always volatile, fast-moving silver.
Long term it's hard to argue. Too much debt creating too much money has led to too much stuff, trapping us all between default and devaluation. One day central banks will exhaust the trust and faith they need to keep the game running. Physical gold will prove the ultimate redoubt for investors and savers. Silver will do what gold does, with bells on.
But why wait for that untimeable moon-shot in precious metals? Crypto-currency buyers have made 7 times their money in the last 12 months alone. And right alongside, private investors have cooled on silver, if not yet capitulated, 6 years after its surge back to the 1980 peak of $50 per ounce. 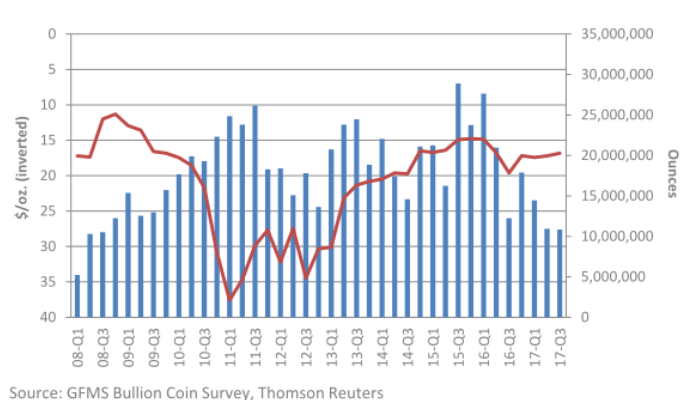 Demand for newly minted silver coins has sunk 40% and worse so far this year from last.
Silver's biggest ETF – the iShares Silver Trust (NYSEArca:SLV) – has also ignored bullion's small year-to-date price rise and seen its number of shares outstanding shrink by more than 6% so far in 2017.
Unlike listed corporate stocks, that has nothing to do with management raising cash to buy back and cancel shares so their own holdings gain value, and everything to do with investors losing interest in tracking the silver price.
It's also got nothing to do with gold. The yellow metal's single largest ETF – the SPDR Gold Trust (NYSEArca:GLD) – has swollen by 5% so far in 2017. That lags the global growth-rate for ETF gold products, now running at nearly 8% since New Year.
The share price of Sprott's closed-end Physical Silver Trust (PSLV) has meantime gone and stayed negative to net asset value...throwing January 2012's 30% premium into yet sharper relief for buyers then believing that silver was running out worldwide and you had to grab yours while you could (or get some securitized price exposure, at least).
Even customers of BullionVault – the smartest and most cost-conscious of precious metals investors – have tempered their demand for silver in 2017. Year-to-date additions to client holdings, net of client sales, are the weakest since 2014 and the second-weakest since we added low-cost wholesale silver bullion bar access to our world-leading gold offer in 2009. Over the first 10 months of 2017 it's running some 43% below last year's level.
Indeed, only hedge fund managers and other Comex paper speculators are showing real faith. Net of bearish bets, the so-called 'Managed Money' category has grown its bullish betting on silver futures and options by nearly two-thirds since New Year. Last week it stood at 3 times the historic average.
But these 'professional' investors are only now catching the Bitcoin bug. Whereas private investor interest in digital currencies has leapt...swamping Google searches for silver investing and even overtaking gold in recent weeks.
Why the switch? It's not the metal that changed. It's simply that, as always in financial promotion, the narrative has switched to a different future of shocking, stunning gains...
Fast forward to late 2017, and these life-changing forecasts now apply to the bits of code known as crypto currency.

"Bitcoin bulls had a lot of explaining to do in the early years. [We] will skip over some of the arguments early bitcoin evangelists had to make...because these arguments are boring. The panel will [instead] debate outlooks for the asset class, what’s behind the current bull run, and the existing obstacles that could keep bitcoin from rocketing to the moon."

So says the agenda for a crypto convention meeting in New York next month.
Knowing its audience almost as well as the " 100x leverage for dummies" crowd now touting Bitcoin derivatives trading accounts, the same flyer says "Digital assets have attracted nearly one hundred thousand new users a day through much of 2017.

"Many of these new participants are still learning."

They'll get schooled good and hard in due course according to history. Maybe for Bitcoin – now here above $6,000 – next year will prove as ugly as 2012-2015 did for silver. But maybe it won't.
To match silver's bubblicious boom of Spring 2011, the price of Bitcoin would need to reach somewhere around $300,000 by this time in autumn 2018.
That's according to the Z-score measure of an asset's 12-month rate of gain, comparing it against the asset's typical historic price moves. The denominator in that equation was blown sky-high by Bitcoin's previous multi-magnitude gains of 2012-2014 – back when its use case of enabling anonymous online retail of illegal goods preceded a 12-month crash costing buyers at the top some 77% in fiat currency terms.
Up at 2013's then-nosebleed high, Bitcoin's Z-score was twice the level silver achieved at its 2011 peak of $50 per ounce. Yet the crypto-currency has since recovered, and much more on top, and all before the  9th birthday of its mystery founder's thesis paper.
Wizened old silver, in contrast, is still just sitting there, with 5,000 years of monetary use worldwide, thousands of irreplaceable and growing industrial uses, and a global (if price-sensitive) fanbase of jewelry buyers. Unlike crypto, it's hard to imagine silver ever going to zero. But with no floor, Bitcoin maybe has no ceiling either, people seem happy to think. It can go to infinity.
At the margin, yes – it's likely the Bitcoin bubble has pulled some private-investor money away from gold. But everyone lining up to explain why "Bitcoin isn't gold" is missing the point for the precious metals market.
For momentum lovers, internet shills and new true believers alike, Bitcoin is silver right now. Only more so.