END_OF_DOCUMENT_TOKEN_TO_BE_REPLACED

Not money, not recommended by advisors. Beyond that...?
DID you know? asks Adrian Ash at BullionVault.
2020 was the most volatile year for gold prices since the precious metal's crash of 2013.
US stock markets were also volatile as Covid and lockdown laid waste to life, lives and many livelihoods...
...whipping faster and further than any year since their crash 'n recovery of 2008-2009
Yet crypto-currency Bitcoin – better known as volatility on crack – saw the violence and size of its price swings barely budge from 2019.
Well, compared to the volatility in its own volatility that is.
Bitcoin's 52-week rolling volatility is mapped on the left-hand axis. Gold and the US stock market's are on the right. 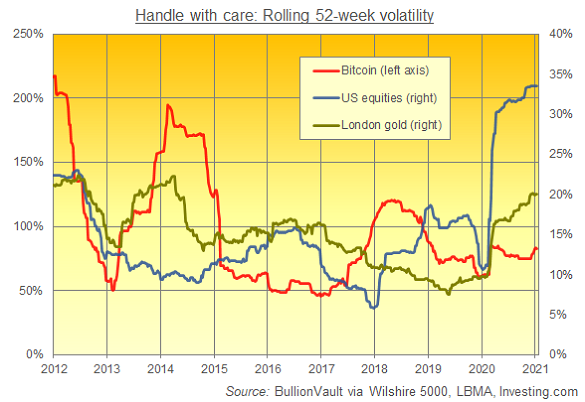 Google the words "bitcoin safe haven" and you'll find that some folk are still drinking in the daytime like its Christmas.
A safe haven is where money runs to when other, typically more profitable assets, suddenly hit turmoil and sink.
The reason investors run is because they want to get there before the mass of other investors take action...
...pausing and waiting at first...and then slowly strolling towards the same place only because they've the price is rising...
...thus helping drive your safe haven higher again when you really need it to pay off most.
Bitcoin in contrast almost halved as the Covid Crisis approached last February.
Then as the stock market surged with commodities, it doubled by August...
...doubled again by December...
...doubled again by New Year...
...and then sank over 25% inside 3 days...
...before rallying but then sliding again with its worst weekly drop since September.
But so what?
Bitcoin's previous spikes and crashes were so much crazier, the late-2020 surge to new highs failed to break new ground for its Z-score...
...a measure of how much faster a price is moving compared to its normal swings.
In fact, the quadrupling from March to November barely registered. 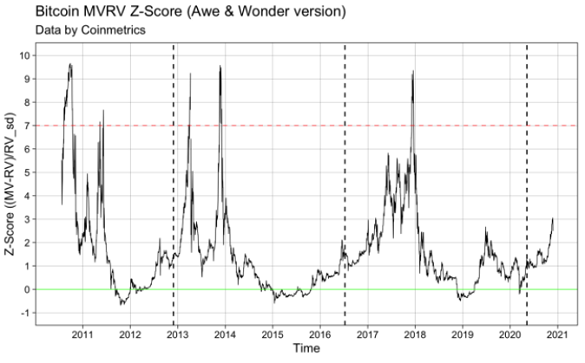 For volatility, the same thing.
Bitcoin has been so violent since an anonymous software engineer realized the US banking system was really slow, and so dreamt up a slower version in 2009, last year's dramatic swings still left the 'crypto currency's volatility right in line with its historic averages.
In fact, these little strings of ones and zeroes...
...the original 'defi' asset, even though almost everyone goes through a very centralized platform or broker or banking-type service...
...are less volatile right now than US natural gas, a truly useful physical substance.
What to think of it?
Maybe that's the issue.
Maybe thinking anything about Bitcoin means you're over-thinking it entirely.

"Like Monty Python's Black Knight," says a friend at Bloomberg News, "Bitcoin believers treat near-fatal volatility as mere flesh wounds.
"Drops of 80% are welcomed as fortuitous buying opportunities. But far from being a weakness, this is evidence of the asset class' longevity."
Erm, wut?
"Bitcoin just won't go away."
Okay, on that we can agree. But digital gold? Really?
Yes, there are a couple of ways in which Bitcoin is just like gold.
First, your financial advisor won't recommend you buy either of them.
Second, neither are money – not as that word is commonly understood, and not outside the Vietnamese real estate market (for gold) or buying illegal stuff on the dark web (for which Bitcoin remains, apparently, fantastic).
But beyond that, the deathless yellow metal could not be more different from magic internet beans.
First, where Bitcoin are created by massive computer 'mining' rigs trying to solve a mathematical puzzle, gold is born from the collision of neutron stars, the most dramatic event since the birth of the universe.
"Ah, but both take lots of energy for humans to get hold of!" says a HODLer.
Sure. But once you have mined gold out of the earth, "it does not come with an ongoing energy debt" as MoneyWeek's Merryn Somerset Webb notes.
"Great point," agrees crypto-and-gold fan, ex-HSBC fund manager Charlie Morris.
"Gold banks the energy. Bitcoin demands the network saps energy in perpetuity."
Third, there's that volatility. Then there's that absurd 'safe haven' claim. 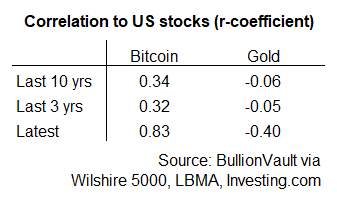 Bitcoin repeatedly shows a weak but positive co-movement with US equities versus gold's near absolute zero.
On an r-squared basis, the numbers give Bitcoin-to-stocks a correlation of 10.2% over the last 3 years. Whereas gold-to-stocks is 0.3%. Meaning zero.
Fifth, and everywhere it has ever been found glinting out of the earth's crust, gold has been the ultimate prize in all cultures and all ages. Yes, some of the estimated 200,000 tonnes ever mined has been lost...
...buried in panic at the barbarians' approach...
...or slowly rubbed off rings, bracelets and dental fillings by everyday wear and tear.
But no one ever throws gold out on purpose (not even the Muisca people of what is now Colombia. On the contrary, lobbing golden objects into a lake was the opposite of trash) and any accidental loss tends to be found and frantically salvaged ASAP.
Uo to 20% of all the Bitcoin created so far, on the other hand, may be lost on hard drives abandoned in landfill or locked away forever because someone forgot their password.
Physical gold cannot be stolen by a hacker or vanish in bankruptcy nor get lost forever simply by forgetting a code. And as today's webinar for the LBMA will show, global bullion trading today represents a deeper, more liquid market than anything except US equities and government bonds.
Gold's depth, history, wide and diverse sources of demand, plus most of all its physicality, could not be more different from a string of digits. And as for Bitcoin's other "digital gold" claims, you need sherry for breakfast to think they're profound.
Limited in supply? So is my cat (the vet saw to that).
Not subject to the 'fiat' of central banks or government? So is pretty much everything outside official currency or bonds.
Against gold's unparallelled liquidity, proven diversification, and 5,000 years of history, what use is Bitcoin?
Well again, maybe that's missing the point. Because maybe it is the perfect asset for early 2021...
...nothing but a speculation on speculation...
...the high-tide mark of a world flooded with cheap, free and even negative-cost cash...
...where the DotCom Bubble is ancient history to half of today's finance professionals...
...where politicians are arguing over who can make the biggest helicopter drops of money...
...and where the lucky beneficiaries either punt it straight onto stockmarket options...
...or can't think of anything better to do with their stimmy checks than take advice from a random astrologer they found on TikTok.
Throw in accusations of Bitcoin's massive market manipulation, and what could possibly go wrong?
And hey, it is less volatile than natural gas right now.