END_OF_DOCUMENT_TOKEN_TO_BE_REPLACED

The Bank of England will only raise its interest rate if it's sure it won't have any impact...

BAD NEWS for anyone tired of the paltry returns on their savings. The Bank of England is getting even more dovish – and even less inclined to raise its interest rate, writes Ben Traynor at BullionVault.

Despite the fact that the official inflation rate is more than twice the official target, the Bank will only start raising its main policy rate – the Bank Rate – when it is confident the rise won't be passed on.

That's what two members of the Bank's Monetary Policy Committee implied last week, when they talked about unprecedentedly high spreads between Bank Rate and the interest rates borrowers actually pay.

To see what they mean, take a look at what's happened in the UK mortgage market since the global financial crisis started: 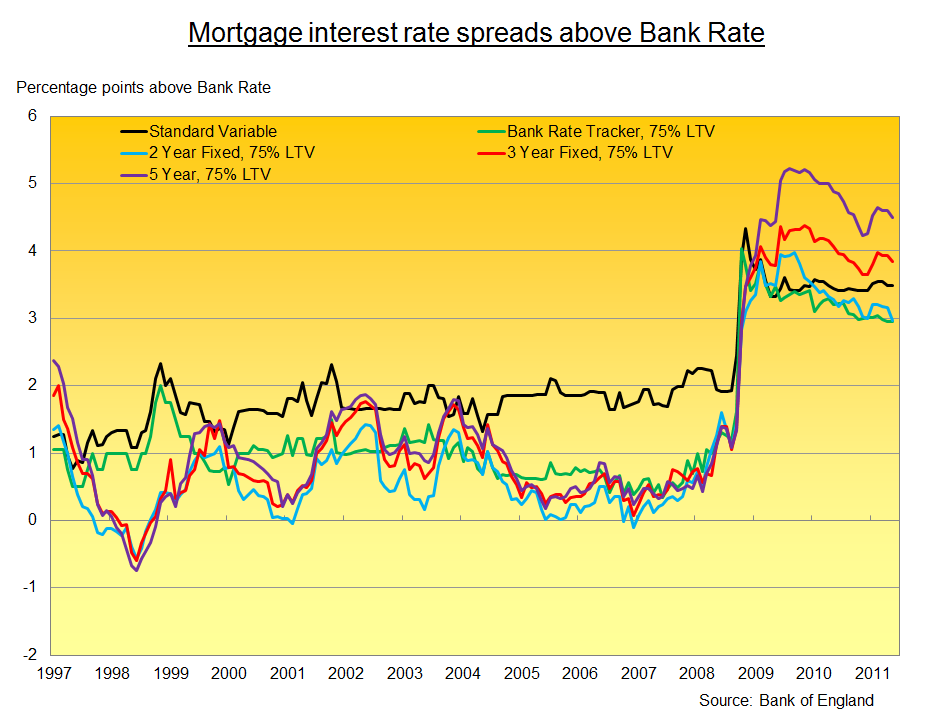 As the Bank Rate fell in 2008 and 2009, mortgage rates didn't fall anything like as far. The result was that spreads above Bank Rate shot up – and they've barely come down since.

MPC member Martin Weale – in a hawkishly-titled speech called 'Why the Bank Rate should increase now' – explained last week that these high spreads are a key reason the Bank has kept its rate at an all-time low of 0.5%:

"The gap between bank lending rates and the Bank Rate is already much higher than it was before the crisis and our setting of Bank Rate takes that into account. If banks were, at present, lending at only small margins above Bank Rate we would need the latter to be higher than it actually is." – Martin Weale, June 13 2011.

"Spreads between Bank Rate and the interest rates charged to many borrowers remain at unprecedentedly high levels...when conditions in the banking sector return to something closer to normal, those spreads will contract and the rate at which that takes place will have an important influence on the speed at which Bank Rate will rise." – Mervyn King, June 15 2011.

The language is eerily similar, suggesting King and Weale are singing from a common Bank of England hymn sheet. The overall impression these comments give is of an MPC whose first priority is to avoid any effective monetary tightening, by only raising Bank Rate once lower spreads ensure the actual cost of credit remains unaltered.

This is understandable. The economy remains weak, and government spending cuts, however necessary, will most immediately be felt as lower demand for goods and services. The MPC clearly feels it must balance the government's tighter fiscal policy with a looser monetary one. As Weale said in his speech, "no one is proposing that monetary policy should be set to anything except a very expansionary stance".

It's also understandable on a human level. Mervyn King will hardly want to go down in history as the man who crushed the economy. At least this way he can say he did everything he could...

There are early signs that spreads are falling, as the ultra-low Bank Rate slowly works its way through the system. Falling spreads, however, do not automatically mean that a hike is around the corner.

A major reason spreads are coming down, to the small extent that they are, is because more and more mortgage holders are coming off fixed deals that have higher, pre-crisis interest rates.

Back in 2007, more than half of all UK mortgages were fixed rate deals. That figure has fallen to less than a third. This means a greater proportion of mortgage holders are directly exposed to a rise in Bank Rate. Combine that with a central bank worried about hurting the economy, and we have a recipe for inaction.

This doesn't bode well for savers, who have seen deposit rates fall along with the Bank Rate: 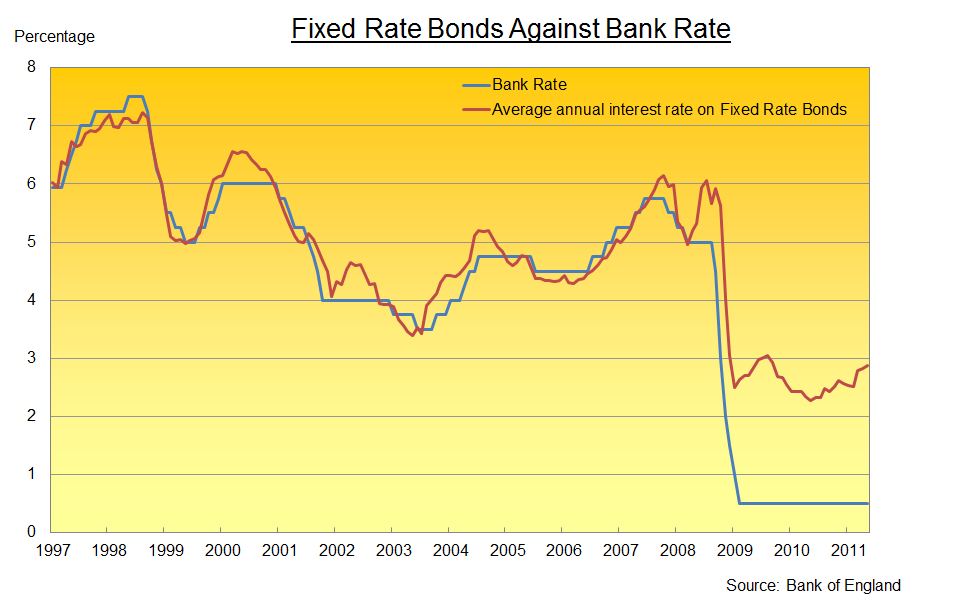 Yes, a positive spread has opened up. Banks are, after all, scrambling to recapitalize, so they need to offer some sort of carrot. But with annual consumer price inflation running at 4.5% in May, savers are still nursing losses in real terms.

The minutes from the MPC's June meeting, published this week, show that the number of members voting to raise Bank Rate has gone from 3 out of 9 down to 2 out of 9, long-time hawk Andrew Sentance having left. And those who voted for a hike – Weale and Spencer Dale – only wanted a quarter of a percentage point.

The MPC has an entrenched inflationary bias. It has shown itself prepared to tolerate persistent above-target inflation rather than risk hurting growth. And even when it does eventually raise Bank Rate, it won't necessarily follow that the rise will be passed on.

So Sterling savers will have a very long wait before they actually start seeing positive real returns on their money – which is probably why more and more of them are Buying Gold...