END_OF_DOCUMENT_TOKEN_TO_BE_REPLACED

Quantitative easing has not worked as advertised. So why press on with more...?

"YOU HAVE lost control – Bank of England takes over," says the Bank of England's cute little game for school-kids if you let the hot-air balloon you control crash into the ground, rather than happily floating it around the 2.0% annual inflation target.

But if the Bank loses control in the real world? asks Adrian Ash at BullionVault. Are there grown-ups ready to take over? And what if the Bank purposefully drives its balloon up into the clouds, so far above its 2.0% inflation target – its No.1 mandate, set by Parliament, and over-riding any secondary aims of "support[ing] the Government's objectives for growth and employment" – that wage-earners, savers and consumers alike start hurling themselves out of the basket?

We shall never know what would have happened without near-zero interest rates and the first £273.5 billion of quantitative easing. But as the Bank sticks at 0.5% for the 36th month in succession – and starts creating a further £50 billion in new money – we can say what has happened with them:

Was this really the aim? Let's ask the Old Lady, as the Bank's been known since rude cartoons began mocking her mock-modesty in the 18th century:

"The purpose of the purchases [according to the Bank of England's own QE pages] was to inject money directly into the economy in order to boost nominal demand."

Two ideas there then – injecting money into the economy, and boosting demand. Neither are part of the Bank's primary mandate, remember, but both ideas have stuck, albeit in the popular imagination more than reality. "Bank injects £50bn into economy," announced the BBC last week, "to give a further boost to the UK."

But while the Bank has already created and spent more than £273 billion on buying government bonds in the last three years, the UK money supply (using the broadest measure, known as M4, and covering all the money in banking deposits) has risen by only £97 billion. Gross domestic product has scarcely budged either, rising by only 1.7% (to the end of September) despite the 4.9% actual growth in M4 money.

So for all the good it has done, where did the Bank stick this injection?

"The asset purchase programme is not about giving money to banks," stresses the Bank in its version of Quantitative Easing Explained. "Rather, the policy is designed to circumvent the banking system."

Not that the programme does side-step the banks. Instead, as the Bank of England admits elsewhere, it sees the Old Lady "electronically create new money" and then use it to buy UK government bonds directly from the banks, whether held on their own account or on behalf of their clients such as investment funds and insurance companies. Still, handed this new cash in return for the gilts that they sell, "These investors typically do not want to hold on to this money, because it yields a low return," says the Bank.

"So they tend to use it to purchase other assets, such as corporate bonds and shares. That lowers longer-term borrowing costs and encourages the issuance of new equities and bonds."

Simple, right? The Old Lady wants to cut interest rates and boost the level of capital raised by businesses – private non-financial corporations as the Bank calls them, those companies outside finance and banking which everyone's so sure had nothing to do with the bubble or bust. Indeed, "the objective of QE is to work around an impaired banking system by stimulating activity in the capital markets," according to Charlie Bean, the Bank's deputy governor for monetary policy. And yet PNFCs have shared little in the flood of money issued by the Old Lady's computer-key strokes.

Since March 2009, total capital issuance by private non-financial firms has totaled £44.5bn – greater than the £34.0bn they raised over the preceding three years, but that was a time of boom, not bust, so the Bank's stated purpose still begs the question. And the total raised is still nothing compared with the total £275bn "injection".

Once again, then, where did the Bank's "injection" go – and was that its aim? 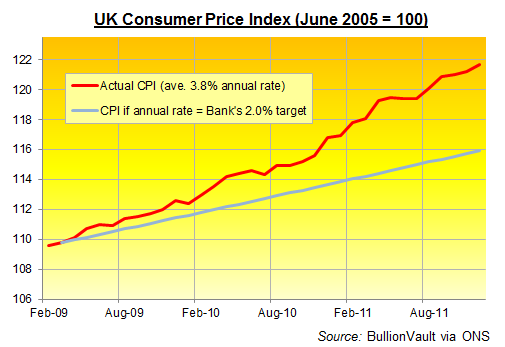 Remember the Bank's core mandate? It's not coy about the need for inflation when talking to children.

"Money is not growing quickly enough to keep inflation close to the 2% target," says the Bank of England in an educational briefing for 16-18 year olds. "The Bank is injecting money into the economy to boost spending to meet the inflation target."

At last, here's an outcome the Bank can happily claim for its own. But whether boosting inflation is a good thing or not, inflation has in fact been well above the Bank's official 2.0% target since 2009. So far above, that governor Mervyn King keeps having to write open letters to the government – as he must under the policy framework established when the Bank gained full control of interest rates in 1997 – explaining why he's repeatedly let inflation breach the upper 3.0% limit for the last 24 months in succession.

The risk of under-shooting inflation looks awfully thin, and the perils of under-shooting might seem academic as well. Because incomes have failed to keep up with inflation – the very opposite of those "second-round effects" so feared by the Bank under Sir Mervyn when it failed to raise interest rates in the face of the banking bubble that started a decade ago. Today, even indebted households have failed to benefit from the drop in what money will buy. Because inflation only eats into debt when a rising income lets you pay it back faster.

Maybe the Old Lady knows what she's doing. Or maybe she thinks "two" now means "three-point-eight". Or maybe she's just losing sight of her 2.0% inflation target, fast becoming a speck in the distance from her hot air balloon. Or maybe – just maybe – now that the Bank holds so many billions of pounds in government debt, it daren't let the total start falling, for fear of a train-wreck in the gilt market. Once you pop, you just can't stop, and it did after all switch to buying fewer long-term gilts and more medium-term debt at this month's £50bn announcement. Which would fit with fretting about a pile-up of maturing debt in the 7-15 year "medium term", rather than trying to suppress interest rates on 30-year gilts.

Either way, quantitative easing has failed to work as advertised to date. Reviewing the evidence so far, we're genuinely none-the-wiser about why in the hell the Bank is now pushing ahead with more.