END_OF_DOCUMENT_TOKEN_TO_BE_REPLACED

Yes, the Bank of England is mandated to target inflation. But inflation in house prices...?

MIGHT THE BANK of ENGLAND cut UK interest rates this Thursday?

Would Hillary Clinton and Barack Obama have "issues" getting together as running mates this November?

First up, the Bank of England's sole purpose in life is to target inflation. And annual inflation in United Kingdom real estate prices is now slowing far beneath the apparently magic 9% mark... 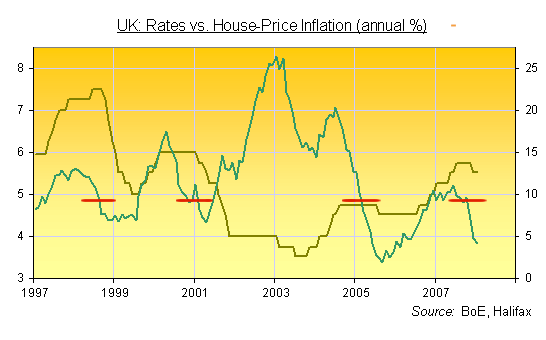 Whatever econometric model the Bank are using, it seems to say 9% annual house-price growth is vital to the nation's well-being.

The Old Lady has stuck to it since she gained "operational independence" back in May 1997. And now falling inflation demands a rate cut once again...if by inflation you mean the decade-long bubble in real estate prices.

Next up, political pressure. The Bank of England is entirely independent of the elected government, of course, despite the policy team being appointed by that very same government. It recently re-appointed the long-suffering "inflation hawk" governor, Mervyn King, for another five year term.

Safe in his job until 2013, will the Trimmer play ball with the Treasury's uncanny knack for second-guessing how his nine-member committee will vote?

"It has not gone unnoticed that the most successful forecaster of changes in [BoE] policy direction since 1997 has been Mr. Ed Balls," as Stephen Lewis at Insinger de Beaufort wrote of the Treasury's chief economic advisor two years ago. "Before each of these events, he pops up on a public platform to approve the shift in advance. His insight into what is supposed to be an independent decision-making process is remarkable."

Fast forward to Jan. 2008, and Ed Balls – now in charge of education – seems to have retained his magical powers of foresight, revealing live on breakfast TV that "our interest rates are low and are coming down."

Spooky, no? Destiny wears red, by the way...

"The Bank of England has got flexibility," Balls went on. "Inflation is low. We will see what happens in the next few months."

Won't we just! But not before the current chancellor, hapless Alistair Darling himself, sets the stage for a rate-cut, too.

"Because of the fact that we now have low unemployment," said the hopeless one at the end of January, "[and] we've got historically low inflation, low levels of interest rates and mortgage rates, the Monetary Policy Committee has room for maneuver."

Room for maneuver? Put another way – as the only US academic on the Old Lady's team did late last month – "worrying about [consumer price] inflation at this time seems like fiddling while Rome burns.

"The evidence from the housing market, and especially the commercial property market, is worrying," David Blanchflower gushed. "Consumer confidence is low in the UK. Interest rates are restrictive at their current levels and that is why I have been voting for cuts."

But then, people in sensitive positions are there because they like to decide what happens. And everyone knows the Bank of England simply MUST cut interest rates...because its sole task is to defend "price stability" – and house prices are now looking awfully unstable.

"Mortgage approvals in December at 73,000 were below the lowest point in the 2004-5 housing pause and point to further housing weakness," writes David Smith in the Sunday Times. "Consumers are cautious and so is business. The CBI said January retail trading was the weakest for 15 months. Consumer confidence did not improve as much as it normally does between December and January, and remains weak."

Never mind that a new survey from Citigroup-YouGov says the Great British public now expects inflation to reach 3.3% from the last survey's 2.7% – "well above the 2% official target" as Smith admits.

Rising inflation in the cost of living didn't prevent the Bank of England from cutting interest rates in 2001, 2003 or 2005. Why should the Old Lady break the habit of her (independent) lifetime now? 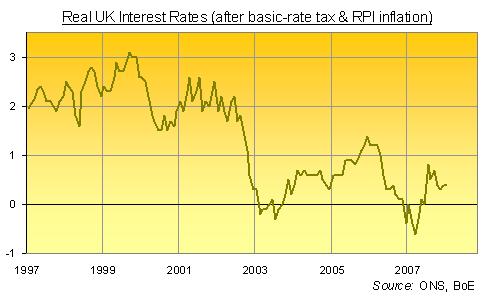 The Bank of England's non-stop housing-bubble policies of the last decade have twice presented even basic-rate taxpayers in the UK with the stark choice of gearing up and throwing themselves into the property market or earning less than zero in the bank after tax and inflation.

On the old, much-preferred Retail Price measure of inflation, the one-in-eight workers paying higher-rate income tax have been offered the grand sum of 0.6% per year in real base rates since the Old Lady gained her independence in 1997.

Any wonder that the Gold Price in British Pounds Sterling has shot higher – and continued to shoot higher, hitting record highs day after day at the start of 2008, even as the housing bubble collapses under the weight of fraud, idiot investors, and over-supply?

British savers still unsure about Buying Gold may not, of course, double their money in the next five years. But they'll hard put to do it, it seems to us here at BullionVault, in either cash-deposits or even real estate – no matter how aggressively the Old Lady tries to devalue the Pound in their pocket.