END_OF_DOCUMENT_TOKEN_TO_BE_REPLACED

Money flows where it's treated best, and right now that means out of the US and into Asia...

WHILE INVESTORS in the United States fret about the still-crashing housing market, the International Monetary Fund buried the real juice in its latest World Economic Outlook, out on Wednesday this week.

About ten pages in comes this little gem:

"For the first time, China and India are making the largest country-level contributions to world growth (in purchasing-power-parity terms; see the figure)."

There you have it. The V-12 engine of global growth is revving up in the Far East. US consumption, in contrast...financed by debt – which has been the centerpiece of the global economic system for 50 years – is declining along with the value of the US Dollar.

Accumulating a ton of debt is not a good way to inspire confidence in your economy. Data from the US Treasury Department, released the same day as the IMF's latest report, revealed a massive outflow of foreign capital from the United States amid the "credit crunch" turmoil of this summer.

Some $163 billion fled America in August. That kind of capital flight is astonishing...and it's confirmation that money goes where it's treated best, where yields are higher and asset values are rising faster than the currency is falling.

You can see from the IMF chart that both China and India are now contributing more to global growth than the US. We don't expect this to be a one-off occurrence. 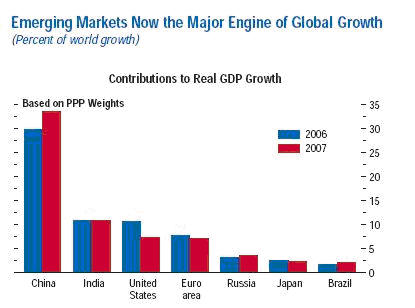 The IMF also produced some charts which bode well for Australia, rich in resources if also loaded with debt.

With China and India driving global growth – and with both countries entering the resource-intensive phase of their development – you'd expect higher metals, energy, and food prices.

Metals prices are already fairly high, including the day-after-day 27-year highs in the Gold Price. At least, they look compared to the rate of growth in energy and food prices.

In fact, the IMF's own chart might suggest a correction in metals prices is probably in the offing, along with a structural increase in energy and food prices. From there, who knows where inflation might run? 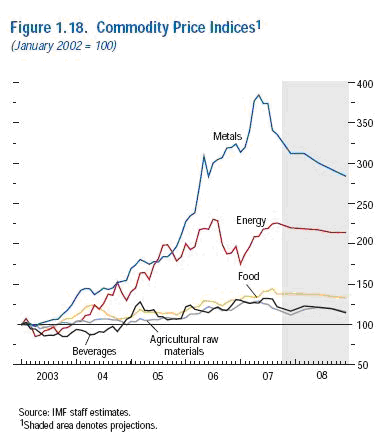 As for the structural increase in energy prices, NYMEX crude touched $89 in trading earlier this week. How much higher can oil go before:

Meantime for Australia's debt-laden consumers, "the HIA today said housing affordability had reached its lowest level since the series began in 1984," writes Nicki Bourlioufas at news.com.au. "The HIA said a first-home buyer earning an average household income of $98,000 a year would have to commit 31.7% of their income [per month] to buy a home, the highest on record."

Something has to give, doesn't it? Either incomes must rise or house prices must fall. Or a third possibility, expectations must be scaled back...at least for over-burdened Western consumers watching their money flow into Asia.