END_OF_DOCUMENT_TOKEN_TO_BE_REPLACED

Who buys the MSM headlines? And who's always wrong at market turns...?
FOR WHAT seems like forever we have been mechanical in managing the precious metals because they have been bearish; period, writes Gary Tanashian in his Notes from the Rabbit Hole.
This has been based on short and long-term technical indications and incomplete macro fundamentals. Gary the robot has had no difficulty whatsoever holding this stance despite Gary the human's unwavering view that the value of gold is in its insurance and long-term retained value qualities.
The precious metals took a hard bearish turn last week and that is the best news I have seen in a while because the complex has been locked below important resistance (failed support) for some time now and the sector usually completes its severe corrections and bear markets with a bang, not a quiet whimper.
We have noted that despite a 4 year bear market there have been too many perma-bulls doing what they always seem to do in dispensing reasons (rationalizations) for the hopeful herds (which had not yet been exterminated) to be bullish. China demand, Indian wedding season (aka the "Love Trade") and world-wide gold jewelry consumption have been put forth as bullish fundamentals.
Indeed, one new promotion is that gold as part of the 'fear trade' is a thing of the past. Those who consider gold as insurance against negative financial events are merely anachronistic has-beens says this new school. Well, today the fear sits squarely in the bellies of those who bought this promotion.
Gold has been contrary to what has been going on in the US and now, some global stock markets; namely gold has been bearish and risk 'OFF' while stocks have been bullish and risk 'ON'. That is in large part due to the fact that commodities have been bearish as well and there has been no overt inflation problem – according to financial markets (conveniently disregarding the creeping cost increases happening throughout the services economy) – and so an 'inflation trade' has not been a component in the global bull atmosphere.
This is all about paper and the value that market participants currently see in that paper. Stock certificates, mortgage documents, the debt of distressed and non-distressed entities alike...it's all good because risk is 'ON' and it will remain good as long as risk remains 'ON'.
Gold is dropping hard. We have a measurement of $960 by an old weekly chart we used to review back when gold was attempting (and ultimately failing) to break some important upside parameters. A failure of those parameters loaded some downside targets that includes the big support shelf from 2008-2009 around about $1000 per ounce.
What I think may be happening is that risk 'OFF' is blowing off to the downside even as risk 'ON' either tops out or prepares to blow off to the upside. Fantasies about gold being able to rally due to US employment growth (and inflation), European economic growth and love having broken out in China and India are being proven wrong.
There are no easy answers and those put forth to date are proven wrong. Gold holds a mythical spell on humans because humans posses fear and greed in great amounts. I once again hearken back to people asking me "How's your gold letter going?" and my answer that seemed to fall on deaf ears...

Yes, it was a letter that was super bullish on gold at its launch in Q4 2008. It is written by a person who values gold to this day, 4 years into a bear market, as much as he did in 2008.
But the obsession with gold is a human thing, or a human history thing. There is no denying gold's historic role as money and medium of exchange. It seems to have been hard wired into the collective human consciousness.
Are we in a great new era, the one that severs the ties to this historic relationship and sets us on a course to digital mediums of exchange amidst government spending and debt accumulation with no bounds? Well, talk about promotions.
Gold is in a bear market because greed and naïveté' with respect to modern policy making are in bull markets. We sit, wait and understand who we are, who Janet Yellen is, who Mario Draghi is, who China Central Planning, BoJ, BoC, RBoA are. We understand that gold is an instrument outside the system and right now it is the System über alles. Long-term gold bulls need ultimate patience and perspective on all of this.
The above was instigated by last week's bearish activity in the precious metals complex, which was significant in finally breaking to new depths, and an email I received from a website reader pointing to some gold-bearish material in the financial media.
We will continue to manage the precious metals, and with the hard down last week we will tighten the focus in weekend reports and in updates at the website. While the lowest targets are still quite a ways off, it is time to be managing closely.
For now however, let's address the reader's email. This gentleman thought I would find the following headlines at the Wall Street Journal interesting. He is right. These are the first two articles under the 'Commodities' menu at the WSJ as of Saturday, July 18. 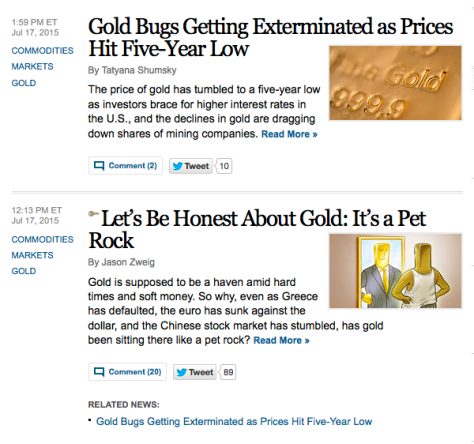 From a contrarian's perspective, this is the kind of stuff that is going to help empty the still over-bullish side of the boat (after it capsizes) and temporarily break the gold obsession that is hard wired into so many people (it's just a pet rock, after all).
Here we have to remember that when the mainstream media trumpets, it is selling headlines. Who buys the headlines? The public. Who is always wrong at important turning points? The public.
We will move forward through what is finally becoming an interesting time in the precious metals. Extremis could well be setting in for the sector, as noted at Biiwii last week. We have worked long and hard for this opportunity.