END_OF_DOCUMENT_TOKEN_TO_BE_REPLACED

The Chinese Yuan just closed August down for the month. A straw in the wind of Dollar strength...?

THERE'S ALWAYS a lot of book squaring by financial traders ahead of a long holiday weekend, writes Brad Zigler of Hard Assets Investor.

But last week saw strong sentiment on foreign currency desks to push the Chinese Renminbi (also known as the Yuan) to its first monthly loss since the US Dollar peg was dropped in July 2005. 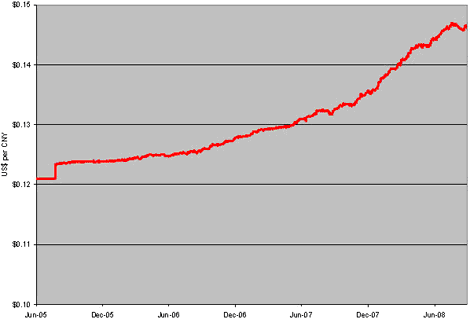 Whether this is just a "bump in the road" – as some think – or a symptom of capitulation to inflation, remains to be seen.

China's growth, of course, has been a driver of the global commodities boom. Weakening Chinese demand loosens a big part of the commodity cycle's underpinnings.

Let's take a quick tally of the damage...

No doubt, China's still growing, but its resolve on the inflation-fighting front is now being tested. A stronger Yuan would certainly help to hem in the inflationary beast. In this Dollar-resurgent world, however, that will be more difficult than it once was.