END_OF_DOCUMENT_TOKEN_TO_BE_REPLACED

Save your pom-poms, but steepening looks bullish...

GOLD BUGS will remember 2012, writes Gary Tanashian in his Notes from the Rabbit Hole.

It was the last year of hope that gold was still in its bull cycle as it managed to hold key support around $1550 into year end.

It should not be lost on us that here into year-end 2019 gold's new bull cycle has risen to, and logically halted at, the very same former support that is now important resistance to a new bull market.

We anticipated this resistance in the summer, and although the up-turning cycle in Semiconductor company stocks of 2013 was logical to gold's demise 7 years ago, that is no longer the case as Semiconductor leadership takes a new leg up in 2019. Why? Well, let's explore just a few of the differences between then and now. 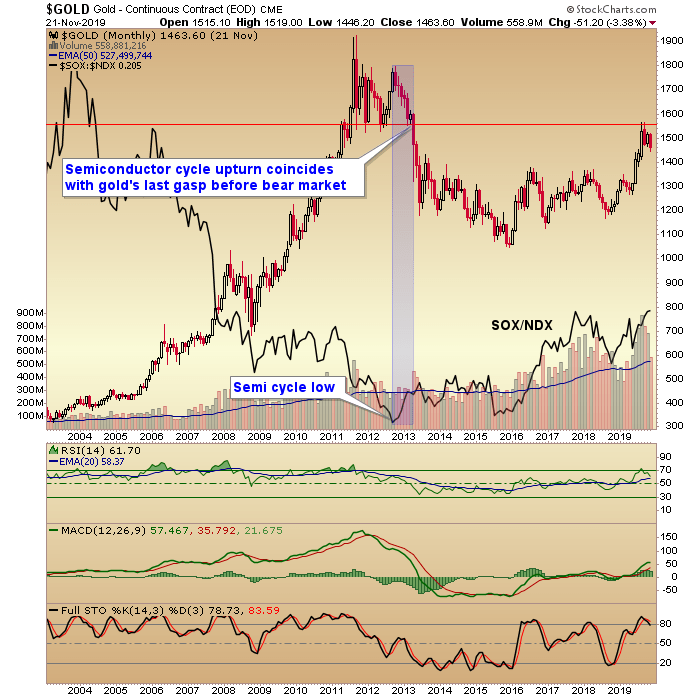 Difference #1: The Yield Curve
The post-crisis era into 2012 was "inflation all the way baby!" as so well stated by my friend, the late Jonathan Auerbach back in Q4 2008.

It was monetary fire hoses all day everyday and policy makers didn't care who knew it. There was a major systemic meltdown of the previous inflation in play and so, of course, our heroes at the Fed fought that realized risk with more of what created it in the first place:

The crowning achievement – and gold killer – of post-crisis policy was 2011's Operation Twist and its stated mission of controlling the yield curve. Twist's agenda to buy long-term Treasury bonds and sell short-term Treasury bonds was the very essence of a flattener for the gap between their yields.

That cannot be disputed. Bernanke kicked off the great flattening and gold was done for years to come. 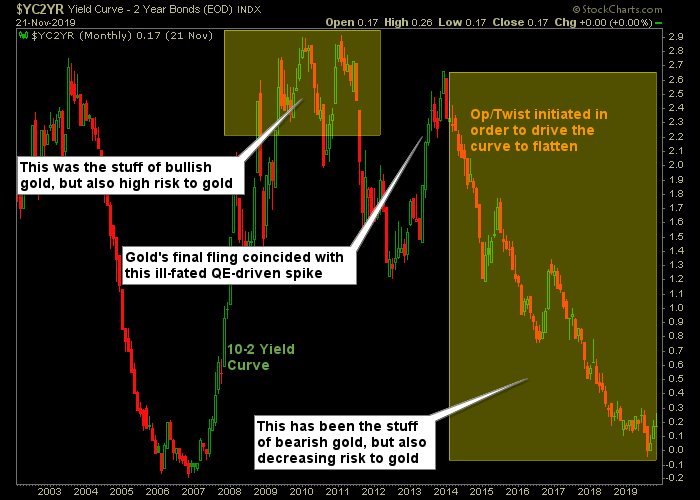 To recap, that's what was happening in the post-2011 environment when a great inflator named Ben Bernanke, defeated inflation (work with me here, we're in Wonderland after all) and drove its signaling toward global deflation and US Goldilocks (as the new Semiconductor cycle was birthed).

What is happening today, in contrast, as a new Semi cycle tries to get off the ground, is completely opposite. There's no inflation signaling by the yield curve, leaving US and global central banks seemingly free to inflate because...no inflation!

A steepening yield curve is an important fundamental consideration for a bullish gold view. That can be due to a curve steepening under pains of economic contraction and market liquidity crises (see 2008) as players fly into shorter-term, lower risk instruments (safer cash equivalents) and short-term bonds rise better than long-term bonds. Or a steepening can occur under pains of inflation fears as long-term yields rise faster than short-term yields as players run from instruments (ie, long-term bonds) that would continue to be degraded by future inflation.

While the flattening yield curve has been gold-bearish for years, one look at the chart above tells you where's the risk (believing the flattening trend will continue indefinitely) and where's the reward (an eventual steepening). Hence, gold is bullish by this marker on a risk vs. reward basis and in 2011-2013 the opposite was the case.

Difference #2: The Trends
The gold price turned up in 2019 along with the ratio of the Philly Semiconductor Index (SOX) divided by the broader tech-stock Nasdaq 100 (NDX) and along with a still-bullish S&P500 of the wider US equity market.

What does that mean, since bullish stocks were anathema to a positive gold price for most of the metal's bear market? 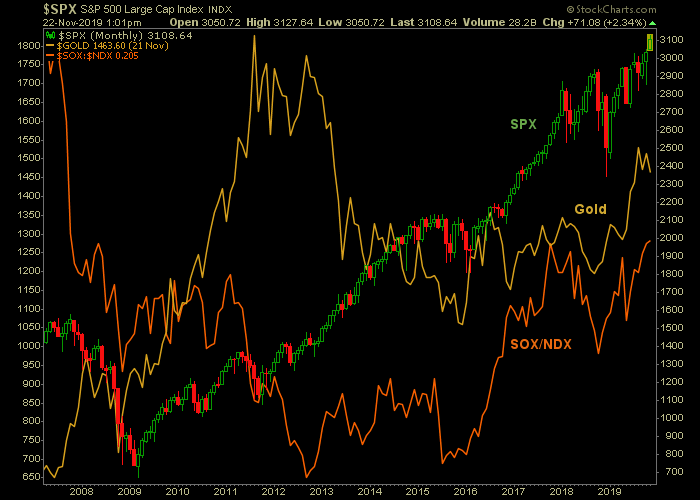 Well, let's again consider the yield curve and the idea of inflationary vs. deflationary.

In 2011, the Fed and its heroic leader were cooking up a way to make it look like they had not just carpet-bombed the macro with inflation over the preceding 3 years. The rise in gold first, and then silver and commodities, threatened to blow the lid off their scheme.

So the curve was rigged downward, inflation signals were simply eliminated (voila!) and they all lived happily ever after.

Well no, some of them lived happily ever after. That would be stock-market bulls and eventually even economy bulls as signaled by the post-2012 Semi cycle signal, because the inflation had to go somewhere and on this cycle it went to the right places this time.

But it was still inflation even if the traditional receivers of inflationary bids (ie, gold then silver and commodities) were played out.

So who's more vulnerable now on a risk vs. reward basis? Well, it is no longer gold, silver and commodities. The more vulnerable items are those that were less vulnerable in 2012. That said, inflation, if a steepening yield curve proves to be inflationary, can lift a lot of different boats for part of the cycle at least.

Difference #3: US Dollar
The 2011 low in the US Dollar corresponded with silver and commodities blowing off in a blaze of inflationary glory. Gold blew out to a less dramatic degree later that year. This was after Uncle Buck made its higher low and began the current cyclical bull.

However, putting aside the fact that USD is in a funky looking pattern (ie, not noticeably bullish looking) I've marked the chart up to show what the market thought upon Trump's election. 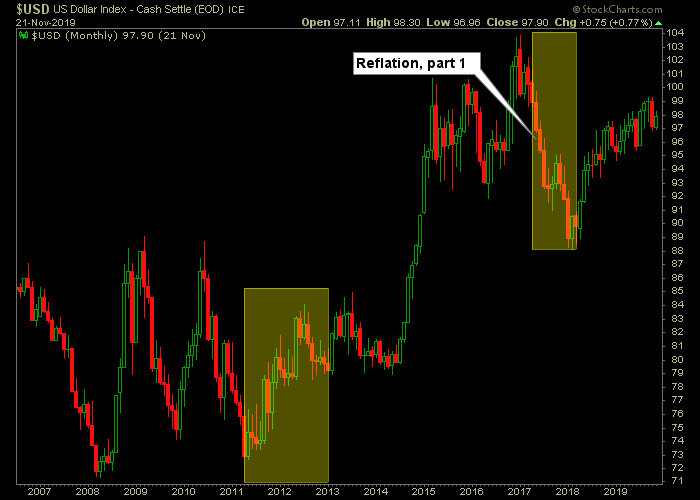 The market rightly thought that "reflation" was the theme, as Trump would seek to weaken the currency in service to better trade balances. But the President found currency manipulation to be a tall task and has shifted to an out-and-out trade war and associated tariffs, leaving the currency weakening to the Fed. Thus far the Fed is playing it coy, but in other actions like tacit QE it shows a potentially weak hand in waiting.

The US Dollar is 37% higher today than it was when gold topped out. If the macro goes a certain way, and if it is anti-USD reflationary, gold can go along with said global macro even if that macro is positive.

While there is too much conventional association between gold and inflation (it's not a reliable inflation hedge on any given interim time frame) it is often pro-inflation. The yield curve for one, and the USD for two, are set up for gold to benefit in any global macro inflation/reflation trade that may come about in 2020.

And if the macro souffle' falls in 2020? I don't want to sound like a gold perma-bull pom pom waver. But gold would benefit from a 'risk off' lurch for liquidity just as it did in the immediate aftermath of the acute phase of the 2008 crisis.

That is the reason the damn thing went through a 7-year bear market in the first place. That would be the case where the Gold/Silver ratio and USD ride together as the 2 Horsemen of liquidity destruction.

Bottom line? We (NFTRH) prepared over the summer for the precious metals correction that is in force right now. As a macro market guy, I will never knowingly B/S myself or readers about why gold should be bullish when the fundamental indicators show that not to be true. So I am sensitive to the 2013 cyclical upturn in the Semi-sector that led the economy even as we have tracked a new upturn over the last year.

The question is "why should it be different this time?" with respect to a gold-bullish view. The post above scratches the surface, but it's a completely different world of today vs. 2012. The next big market event is not likely to look like the more recent big events.