END_OF_DOCUMENT_TOKEN_TO_BE_REPLACED

The yield curve is flattening...
I DON'T cheer-lead a given view, writes Gary Tanashian in his Notes from the Rabbit Hole.
But if I were to do that, I'd be cheering for a yield curve flattener to put a correction to inflationist dogmatists quoting von Mises to the herds and otherwise sloganeering about inflation and a "commodity super cycle" (that term is pure promo).
Because, well, the curve is flattening.

This means one of three things.
Do you want to guess or do you want to interpret along the way and be right when it will be most important?
I want to be right, and so the first thing I will do is to remind myself not to swallow anybody's dogma. No sir.
In 2020 we were tasked with getting bullish, not just on stocks but the entire cyclical, inflation-sensitive world of assets due to the Fed's actions in Q1 amid the COVID hysteria.
In hindsight it was like shooting fish in a barrel, although in real time we simply developed and carried the narrative each week in NFTRH. It's all you can do in the markets; refine, adjust and move forward.
Moving on, and with regard to the yield curve's short-term flattening trend noted above, once again we unearth the busy monthly chart macro view of the yield curve that begs patience and perspective as the macro grinds out what will be ahead.
If the current short-term flattening proves to be a shakeout within the ongoing inflationary regime, then as you were inflation traders. The curve would steepen again and you'll eventually get bailed out. Lots of inflation sensitive, cyclical stuff can recover into a 'next phase' (CRB target: 270+).
If it is to resolve into a new deflationary steepener (the reminder being that the yield curve can steepen under inflationary or deflationary pressure) I'll prepare to buy gold and gold stocks on the crash, but before that hopefully have the opportunity to short stocks on proper setups.
If it is a Goldilocks flattener, well, you know the drill. Stocks, baby. Stocks with a bias toward technology and growth and away from cyclical and inflation-sensitive. As it stands now , my view of the Semiconductor sector is already positive, fundamentally at least. In 2013 a positive NFTRH view of the Semis happened to lead and then coincide with the massive yield curve flattener from 2014 to 2019.
Coincidence? 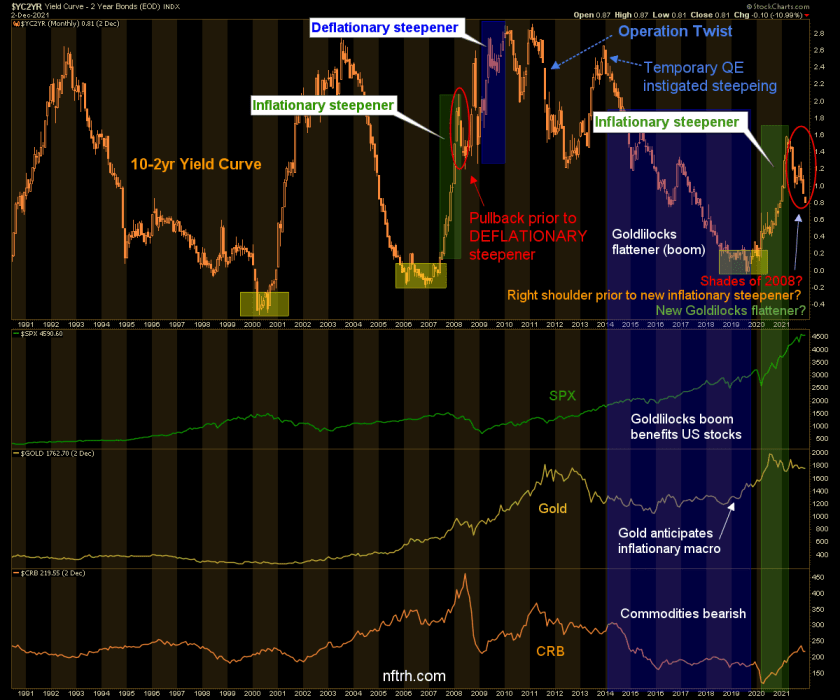 The above is an attempt to provide views of the three main possibilities and to bust peoples' preconceived notions if at all possible.
There is a lot of 'auto pilot' type analysis out there, much of it for free. It is free for a reason. Hell, even premium analysis is often on auto pilot.
That is why we need to have a capacity to think for ourselves. Trust certain sources but ultimately know why we do what we do in the financial markets.
As humans, we are generally taught to respect authority and those of more expert origins than we the lowly individual may be. But in the financial markets that has proven wrong, even tragic thinking all too often.
There are grifters and well meaning sources alike. But only the market will decide what is ahead, which is why it is best to dig down and understand the market's roots; understand what makes it tick in the era of over-stimulation and leverage by policy.
As an interlude, the above is why it is always good to have gold as a 'value' asset, even when it is price-bearish. It is not a play in the casino, but all too many people see it as just that.
Gold simply is; a heavy lump of retained value amid the inflated and deflated assets around it. It's not a 'play'.
Try to think independently going forward and use good tools. There are inflationists, deflationists, gold bugs, commodity super cyclers, bulls, bears and every other flavor of market opinion out there. But per the above view, the macro is undecided by one of my primary tools, the yield curve.
So why not avoid the dogma and stay open minded while the macro sorts itself out?
There will be opportunity to position as the picture clears and the macro resolves.