END_OF_DOCUMENT_TOKEN_TO_BE_REPLACED

Down is up and holding is raising, or cutting, as we chase these rabbits...

The BANK of JAPAN gave us a glimpse as to just how far down the rabbit hole we may have to follow global policy makers, writes Gary Tanashian in his Notes from the Rabbit Hole.

We follow to try and make sense of ever more complex and shall we say, innovative 'tools' being used in the effort to engineer individual economies and asset markets within the global financial system. Last week, the BoJ announced it would conduct "JGB purchase operations" in order to "prevent the yield curve from deviating substantially from the current levels".

The market initially interpreted this to mean BoJ stood in support of a rising yield curve, which would for example, help the banks (shares in which exploded higher off of the support levels we had projected), but by the end of the week the Japanese Yield Curve had eased substantially and there seemed to be confusion about what the policy's intent, or would-be effects, actually were.

I wonder if the BoJ even fully knows what it is doing now. Lots of moving parts in a complex system.

As for the US Fed's FOMC, it was non-business as usual. For all the pomp and bluster of the August-September Jawbone blitzkrieg we've been subjected to, the damn committee simply rolled over again, admonishing through hints that they really, really mean it when they imply a rate hike is still coming in 2016. But for now and to the surprise of very few, they did what they have done for the last 8 years; obfuscate and delay.

This time we even saw renowned dove Eric Rosengren rightly (in my opinion) shifting to the hawk side of the table as he observes a landscape of cranes to nowhere in Boston and extrapolates...

"Hmmm, I think we are blowing an asset bubble."

Yet still, the committee chaired by Janet Yellen – she of the hawk-tinged Jackson Hole Jawbone (with handy QE "tools" in her back pocket) – went on to vote NO HIKE despite elevating CPI inflation and soaring real estate, healthcare and services costs. Also, let's not forget the 'near all-time highs' stock market, which unsurprisingly got an across the board price surge in response.

Where to now? Speaking as a lowly participant, I gave my stance in Friday's in-day market update to subscribers (profit retention). As you will see in this week's report, weekly US stock market charts remain just fine, as we have noted for months now. But the daily charts of NDX and SPX used in the update gave some parameters to shorter-term correction potentials. What's more, the global macro is a confusing mess. Japan took confusion to a new level last week, but the US is also a Wonderland of its own, post-2008. 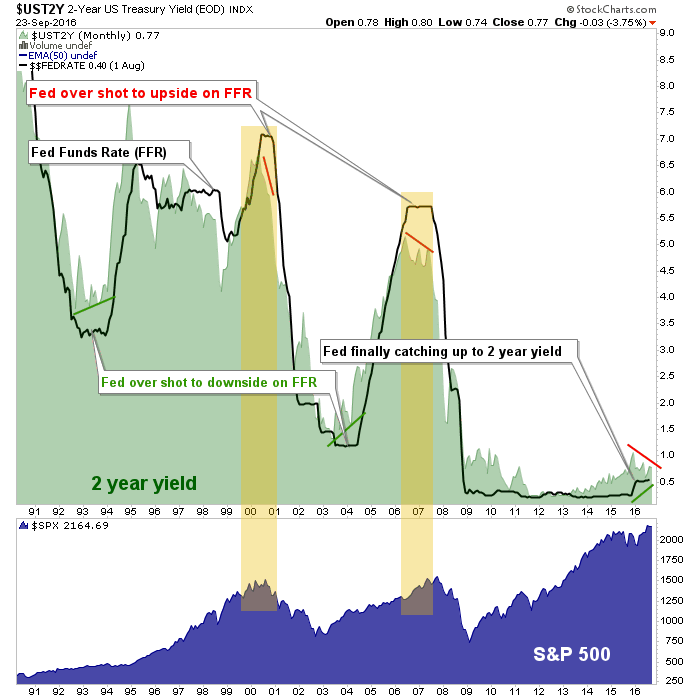 Declining in 2016, the 2-year has been acting like it does at important economic and stock market tops, but Fed policy has not caught up to and exceeded the 2-year. We have long noted that the Fed decides nothing; the bond market makes the decisions. Yet the 2-year has been rising since 2013 and only in December of 2015 did the Fed decide to start to get in line with the message. Ever since then the 2-year yield has been declining, as it does at market tops, and this assuredly factors into the FOMC's dovish rollovers.

Did someone say "confusing"? Did someone imply that even the likes of the Fed and the BoJ are confused? Did someone name a market report and associated service after the story of Alice in Wonderland during the lead-in to Q4 2008, when so many of the distortions built into the system were first introduced? I make a big deal about "playing it straight" – ie, using the indicators and market signals for what they tell us, not what our most closely held views (biases) want them to tell us. But there is a highly technical term we can use for the chart above; it's all screwed up.

Now there is little going on in macro markets that is conventional, and because of that it is difficult if not impossible for conventional analysts, quants and various other data miners to extrapolate forward in any accurate way.

If the process noted above were coming from, say, 3.5% to 4% yield levels it would be easy to call it a 'high risk, sell stocks' atmosphere because all the ducks would be lined up and we would be believing the Fed when it poops rising interest rates talk out of its orifice. We could then expect the typical over shoot and ensuing bear market. I think that is what is coming, but the timing – in line with continual 'obfuscate and delay' of the Fed, is what is in question.

The chart above shows the ongoing 2016 downtrend in the 2-year yield. That is the plan that the Fed is following. Notice the big spike in October/November 2015? Notice the single Fed Funds Rate hike in December of 2015? Ever since then the 2-year has trended down and so the Fed has stood down. They ramp up the tough talk however when the dupes on the long end of the curve begin to get unruly. As noted recently, the 10 year yield broke its downtrend. About the only ones who would like that are the Banks, pigs that some of them are [insert Stumpf photo and time-wasting belly aching here].

A rising yield curve is not what is happening yet, however. But if it were to happen confidence in the Federal Reserve would take another hit. So for now they 'tough talk' the bond market, holding that massive would-be 0.25% rate hike over our heads.

I think they'll probably raise in December if the markets do not fall apart in the interim. They do have a bit of wiggle room before they overshoot the 2-year per the first chart above. Another hike would give them a second little nugget of credibility. But if long-term yields resume climbing at any point, the message would be inflationary and the Fed may have to chase the curve higher.

If on the other hand, yields do not resume upward we'll have seen the last rate hike in a long while.