END_OF_DOCUMENT_TOKEN_TO_BE_REPLACED

A cut in government outlays would be great news for wealth generators...

THE US Congressional Budget Office (CBO) said on August 22 that scheduled tax increases and spending cuts in 2013 would reverse the current modest economic recovery, writes Dr Frank Shostak for the Cobden Centre.

The CBO and other experts are of the view that large government spending cuts and tax hikes will cause severe economic slump.

Experts hold that without action by Congress to avoid a "fiscal cliff" Americans should expect a significant recession and the loss of some 2 million jobs. The CBO predicts that the real GDP could shrink by 0.5% next year while the unemployment rate could climb to around 9%.

The "fiscal cliff" refers to the impact of around $500 billion in expiring tax cuts and automatic government spending reductions set for 2013 as a result of successive failures by Congress to agree on some orderly alternative method of reducing budget deficits. 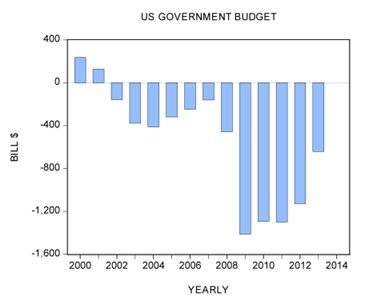 Given that there is a time lag between government outlays and their effect on economic activity it strikes us that it is the cut of $40 billion this year rather than the cut of $9 billion next year that should be of concern to various worried commentators. 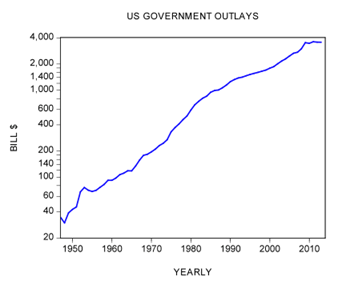 So in this context is it really bad news for the economy if on January 1, 2013 we will have an automatic cut in government outlays? Most commentators such as the IMF and the CBO are of the view that cutting government outlays could inflict severe damage to the real economy.

What about the fact that we will also have an increase in taxes as a result of the expiration of the Bush tax cuts? To the extent that government outlays are going to be curtailed the increase in taxes should be regarded as a monetary withdrawal from the economy. In this sense it is like a tight monetary policy. A tighter monetary stance in this respect should be seen as positive for wealth generators since it weakens various bubble activities that sprang up on the back of past loose monetary policies.

(Conversely, a reduction in taxes whilst government spending goes up is not a tax reduction as such but should be viewed as loosening in the monetary stance. Again, an increase in government amounts to an increase in effective tax. The government has to divert resources from wealth generators to support the increase in spending).

Note that the CBO projection of the future state of the US economy is in terms of GDP. Given that GDP is in fact monetary turnover its ultimate course is going to be dictated by the rate of growth of the money supply. The more money that is pumped the stronger GDP is going to be.

Contrary to the CBO and most commentators, we suggest that what is likely to undermine the growth momentum of GDP next year is the current visible decline in the growth momentum of money supply. In the week ending August 13 our monetary measure AMS fell by $70.9 billion from July. The yearly rate of growth of AMS fell to 6.5% from 12.3% in July. Observe that in October last year the yearly rate of growth stood at 14.7%. 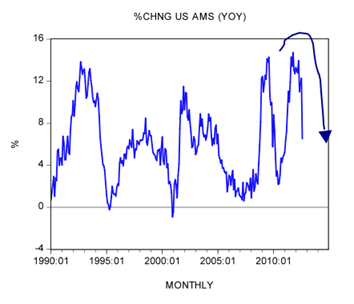 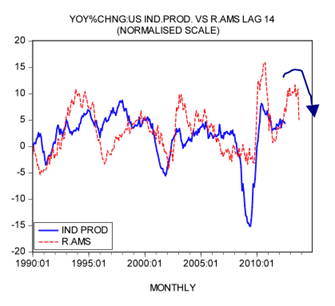 Whilst the growth momentum of industrial production and real GDP could be in trouble from the second half of next year the underlying economy however should start strengthening. The demise of bubble activities will be good news for wealth generators.

Against the background of a still weak labor market we suspect that Fed officials are likely to introduce another massive pumping in a few months' time. Given the current time lag structure it is unlikely however that more pumping can avoid a decline in the pace of economic activity in terms of GDP from the second half of next year.

According to the US Congressional Budget Office (CBO) scheduled tax increases and spending cuts in 2013 (the so called "fiscal cliff") could reverse the current economic recovery. We suggest that a cut in government outlays is actually going to be good news to wealth generators. It is, however, going to be bad news for various non-productive activities that emerged on the back of increases in government outlays. In the meantime, a serious threat to economic activity in terms of GDP is posed by a visible fall in the growth momentum of money supply. We suggest that the present fall in the growth momentum of money supply is likely to undermine the GDP rate of growth from the second half of next year.