END_OF_DOCUMENT_TOKEN_TO_BE_REPLACED

GERMANY'S government, a AAA-borrower, is more likely to default than Viacom, a "near junk" borrower. At least, that's what the credit default swap (CDS) market is saying. The CDS market may be wrong, of course, but it probably isn't crazy, writes Eric Fry for the Daily Reckoning. 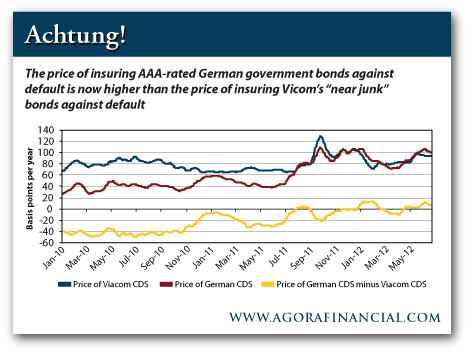 How could this be?

The answer is simple: Germany has become the "rich guy" in a group of friends who are dining at an expensive restaurant. Prior to the meal, everyone assumed that each friend would pay his share of the bill. (Each friend, that is, besides Greece. That dude never pays).

But now that the meal is over, almost no one is reaching for his wallet. Greece "stepped out for a smoke," Spain "went to the restroom," Italy "excused himself to take an urgent phone call." Meanwhile, most of the other diners are shuffling nervously through their wallets, mumbling about not finding the credit card they are looking for.

And there, at the head table, sits a forlorn Germany — platinum Amex card in hand — dreading the fate he knows is coming his way. That's why investors are pricing insurance on Germany's AAA debt at BBB levels.

Like a textbook AAA borrower, Germany possesses an "extremely strong capacity to meet financial commitments." Unfortunately, those commitments are going parabolic...which means that Germany's robust balance sheet is as "subject to adverse economic conditions" as a textbook BBB borrower.

Next up, the Bundesbank is facing another €698.6 billion of exposure to various peripheral European central banks. That exposure derives from an obscure credit facility known as the Trans-European Automated Real-Time Gross Settlement Express Transfer System — i.e., "Target2." The Bundesbank's Target2 balances soared to €698.6 billion in May... from €644.2 billion in April," Grant observes, "and next to nothing in 2006." 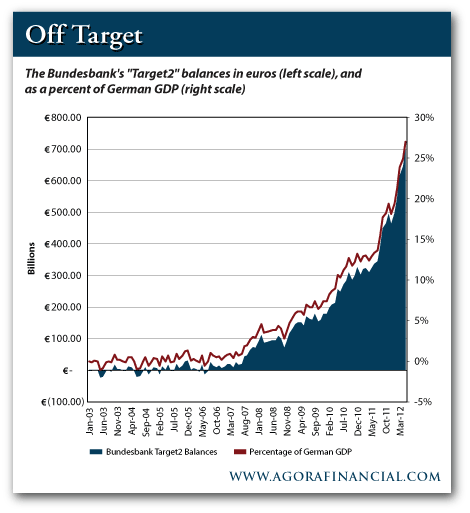 Meanwhile, over in the private sector, German banks are sitting on about €323 billion of exposure to Greece, Ireland, Portugal, Spain and Italy.

So when you tally up all these acronyms, direct loans, backdoor guarantees and cryptic credit facilities, Germany's total exposure to its beleaguered Eurozone neighbors soars to €1.5 trillion! That's a staggering sum of money, equal to more than half of German GDP.

And remember, not a single one of these credit facilities is financing domestic German enterprise; they are simply trust-me lifelines to foreign economies with a long, checkered history of debt-repayment...or more typically, debt-non-repayment.

"Markets are beginning to latch on to the fact that, in effect, Germany is the Euro and the Euro is Germany," observes Evan Lorenz, a research analyst at Grant's Interest Rate Observer.

Whatever the outcome, risks to Germany's national balance sheet are clearly on the rise. If these risks continue to rise, Germany's high-flying bond market may start flying like a lead Zeppelin.