END_OF_DOCUMENT_TOKEN_TO_BE_REPLACED

If you're not familiar with this triumph of modern Kultur, it's a cable TV show about people battling zombies in a post-apocalyptic world.

Basically, The Walking Dead's premise is that an exotic disease killed off most of the world's population, but in the process reactivated the basal sections of their brains. Now the not entirely deceased entities prowl the land as zombies. As a counterpoint to these "walking dead" critters, an array of struggling humans battle to survive.

What does this have to do with investing? Glad you asked!

The Walking Dead helps, in perhaps a peculiar way, to understand my new investment thesis. While there may be no way of stopping this plague of zombie money from flooding the market, there's still plenty you can do to "arm yourself" against its deadly advance.

Specifically, you can buy into the idea of holding gold or buying a few undervalued gold companies.

I recently uncovered a fascinating chart, from Bianco Research LLC, of long-term US interest rates covering 222 years, from 1790–2012. 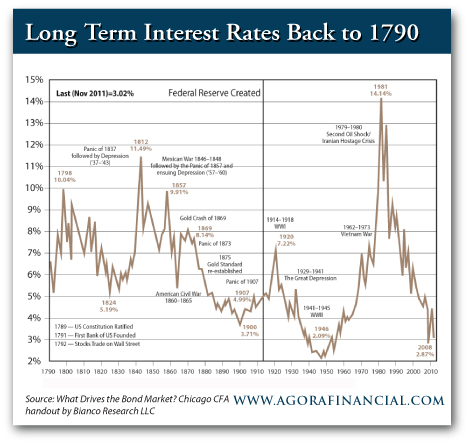 Pretty cool chart, eh? I could discuss this chart all day. But the take-away here is that since 1790, the average long-term interest rate on US Treasuries has been about 5%. When you look back over all of US history, interest rates have almost never been under 3%, excepting during the total national effort of World War II. Keep that 5% in mind!

So what are the current interest rates for US bonds? According to the US Treasury, they're solidly beneath 3%. As the chart shows, historical rates for US bonds have averaged about 5% over the past 222 years. Yet right now, according to the US Treasury, short-term bonds yield just a hair above nothing. Medium-term bonds (one–five years!) yield way under 1%. And bonds from seven–30 years yield from 1.05–2.80%.

We're a long way below the historical average of 5% money, right? Treasury yields are as dead as doornails. Looking ahead, what if there's even a slight reversion of Treasury rates to the historical mean? What if these near-dead current interest rates start to rise?

What do these superlow, historically anomalous Treasury interest rates tell us? On that point, I'm reminded of the words of the great Austrian economist Ludwig von Mises, who wrote that "Public opinion always wants easy money, that is, low interest rates."

Well, clearly, we have a government policy of easy money and monetary populism. The US government — and its associated class of media and financial enablers — wants cheap interest rates to mask the true cost of horrific, irresponsible levels of federal borrowing and spending. Low interest rates are just grease for the country's financialized treadmill to nowhere.

With Treasury bonds now offering superlow interest rates, it sets a funereal tone for interest rates through the rest of society. Why bother saving? Could it be that American money is "cheap," in terms of interest because over the long term, it's not worth all that much anymore? Do you see the issue?

Back when I took the basic survey economics course at Harvard — Economics 10 — I recall the late Otto Eckstein (who worked for presidents Kennedy and Johnson) saying that cheap money destroys capital. That was just a fundamental point. If you missed that, you failed the course.

In other words, we live in a capital-intensive world. Capital requires savings and investment. Yet low interest rates undermine people's incentive and ability to save and invest. So low interest rates are — over any prolonged period of time — thoroughly destructive toward capital in many ways.

We could go back to von Mises, who stated, "True, governments can reduce the rate of interest in the short run. They can issue additional paper money. They can open the way to credit expansion by the banks. They can thus create an artificial boom and the appearance of prosperity. But such a boom is bound to collapse soon or late, and to bring about a depression."

Soon or late? My bet is soon.

I could carry on this economic discussion, but I've laid enough foundation. Let's get to what von Mises called "real money" — that is, gold.

Prices for gold and silver have declined recently. One sage banker explains — in the Wall Street Journal, no less — that the economy is improving. Thus people are less inclined to "keep their money idle" by buying gold, he says. Better to "put your funds to good use," he says, by channeling it into other investments. Really?

Evidently, this banker-guy missed the class in which the instructor taught that "gold is money." Because there's nothing "idle" about holding gold. Ask the Turks. They're buying Iranian oil, and paying for it with gold. Apparently, there's a whole other economy developing out there.

Meanwhile, my tally of national central banks that have been buying gold, in recent days, includes Russia, India, Brazil, Mexico, Saudi Arabia and Vietnam. What do they know?

Still, every now and then — back in the 1970s — one could overhear a Harvard economics professor say something like "a Dollar is as good as gold." Yes, it was a reminiscence of the days of the Bretton Woods Agreement, which established the Dollar as a currency "backed" by gold.

At any rate, I've never thought that US currency was real "money." Those green pieces of zombie paper are merely a medium of exchange, and "legal tender for all debts, public and private." Where did I get that offbeat, countercultural idea? Well, start with the text that's printed on every Federal Reserve note, that's where. It says exactly that.

There's a difference between currency and money. Modern America has been able to get away with blurring the currency-money distinction for a couple of generations. But with federal spending out of control, each day brings us closer to our own, contemporary version of economic apocalypse.

Really, who needs the recent Mayan galactic planar alignment hoopla, when you've got a federal government that spends astronomical sums of "money" that, apparently, comes from nowhere? Well, okay, it comes from the Federal Reserve. But when you get down to the essence of things, Fed-money is equivalent to a "Big Bang money machine" — from nothing, comes something.

This reminds me of a story — a true story, no less. I was in the Pentagon, some years ago, in the days of the Bush II-administration. It was E-Ring stuff. I was in the very spacious office of a very senior guy in the US Air Force. We were discussing energy issues, particularly Air Force programs to spur a US "synthetic fuel" industry.

Our discussion touched issues of government funding of private industrial development, and questions about who owns the intellectual property (IP). New energy-development technology has national security implications. Should the IP go into the public domain? Or do we keep parts of it classified?

One of the military staffers at the table spoke up, and said, with a downbeat voice, "I don't know if we can keep this kind of tech classified. We're terrible at keeping these things under wraps for long."

As everyone around the table nodded in agreement, I decided to test their hearing. I said, "That's true. Really, the only two national secrets we've ever been able to keep are about those space aliens, and the captured flying saucer in Area 51, and that there's no gold in Fort Knox."

The room went quiet. You could hear a pin drop. The senior Air Force guy leaned over the table, and looked right at me. He said, "Really? There's no gold in Fort Knox?"

Buying gold? Make it safer, cheaper and easier with BullionVault...