END_OF_DOCUMENT_TOKEN_TO_BE_REPLACED

IF YOU ARE a U.S. investor, writes Martin Hutchinson for Money Morning, you can't be happy about the prospects for your portfolio.

After all, you're mostly trapped in an economy with a gigantic and dangerous financial-services sector, a central bank that can't stop itself from printing money and a government that overspends wildly.

But there is an answer: You might consider allocating some of that "at-risk" capital to a country that has none of those problems – Germany.

Germany has a banking system, of course, but that banking system is not the overgrown financial-services monster that we have here in the United States (or, for that matter, in Great Britain). It's impossible to get a subprime mortgage in Germany: Even now – and even after mortgage levels have crept up in recent years – the average down payment for the purchase of a new home in this key Eurozone nation is 50%. As a result, the homeownership rate in Germany is only 43%, the lowest rate in the European Union.

That's actually healthy; far less of Germany's capital is tied up in unproductive housing and the savings rate is correspondingly higher. (Let's face it, most Americans don't accumulate 50% of the cost of a house in savings over their lifetimes – unless forced to do so in a company pension scheme).

What's more, this more-modest home-ownership rate reduces the impact of speculative bubbles, since the wealth of most folks isn't tied up in rapidly escalating house prices. 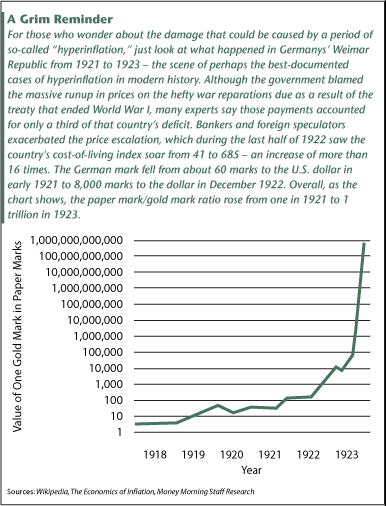 So while the German banking system had its own real estate problems in the late 1990s, the only parts of it that got in trouble in 2008 were those banks that had rashly ventured overseas and got caught up in the US disaster.

Up until 1999, Germany had the most admirable central bank in the world – the Bundesbank. This was a much better set up than the US Federal Reserve. It was owned by the states instead of by the national government, so political interference was much more difficult. It was a single institution, instead of a collection of regional banks, so it was much easier to manage. And it had the single objective of avoiding inflation (Germany having bad memories of the Weimar hyperinflation of the 1920s) so did not get sidetracked into attempting Keynesian management of employment. As a result, Germany's currency – the Deutsche Mark – was a beacon of stability during the inflation-ridden 1970s.

In 1999, control of Germany's monetary policy passed to the European Central Bank (ECB). The ECB is not as solid as the Bundesbank, but it still beats the Fed. The ECB expanded the money supply much less than did the Fed from 2002-07, and it has issued much less monetary stimulus since the crash. Consequently, there is far less danger of inflation in Germany and the Eurozone in general than there is in the United States.

Yes, there's the possibility that German taxpayers might have to bail out Greece, but the same possibility exists in the United States with respect to California, which is much larger.

However, the most important advantage for Germany over the United States – in fact, over all the other major industrial economies – is its superior fiscal policy. When the talk of "stimulus" first appeared in late 2008, Peer Steinbruck – a Social Democrat who was then serving as Germany's finance minister – rudely described it as "crass Keynesianism". As a result, Germany did very little stimulus, and so still has a budget deficit of less than 5% of gross domestic product (GDP), in spite of the recession.

Last September, the German electorate decided that even Steinbruck was too socialist, and so elected a coalition between Angela Merkel's Christian Democrats and the Free Democrats, a free-market party that is even more opposed to public spending than Merkel.

The effect of this has been to push Germany even more firmly into the fiscal-retrenchment camp. The German parliament lopped an extra €5.8 billion ($8 billion) off public spending before finalizing the 2010 budget. No pork barrel waste there!

The result has been a very brisk economic recovery, with no inflation and no significant risk of "crowding out" the private sector. Manufacturing orders were up a strong 4.3% in January, far more than had been expected, and are now 19.6% ahead of where they were a year ago. Unemployment is 8.2%, well below the US level, while Germany's current-account surplus is a massive 5.2% of GDP.

With competitive manufacturing, a business-friendly government and plenty of domestic capital, Germany is about as healthy an economy as there is in the world today and is thoroughly underrated by US and British analysts. Its stock market is trading at a fairly demanding 19.7 times earnings, according to The Financial Times database. But that's lower than the US market multiple of 20.0 times earnings. And Germany has better near-term prospects.

You might want to think about owning some of Germany's promise.