END_OF_DOCUMENT_TOKEN_TO_BE_REPLACED

WITH THE S&P 500 close to its all-time highs, a common question is: will we see a pullback or a continuation in the bull market? This is obviously a very complicated question to answer, as investor sentiment in the S&P 500 can shift extremely quickly, writes Sasha Cekerevac for Investment Contrarians.

In addition, there is obviously no quantifiable method to predicting the future. However, we can look at various indicators that might give us information about what is probable.
While the S&P 500 has continued moving higher, with investor sentiment in America cautiously bullish, over the past month there has been a huge increase in volatility and pullback in emerging market nations globally. Both the stock and bond markets in the emerging nations have been hit significantly.
With increased speculation that the Federal Reserve will begin reducing stimulus, part of the global link is beginning to break down. Over the past two months, emerging market bonds have fallen approximately 6.3%, as investors begin exiting riskier assets.
Why does it matter what happens to investor sentiment in the emerging markets for Americans whose primary focus is on the S&P 500? There are several reasons.
The S&P 500 comprises some of the strongest companies in the world. Because of this, investor sentiment in the S&P 500 is usually the last to get hit. The first indications of trouble usually stem from the peripheral, smaller emerging market countries that are thin and illiquid.
When we see signs that investors are beginning to panic and sell positions in those sectors, and if things then don't stabilize, the trouble can easily hit our shores. Don't forget, a huge amount of earnings for the S&P 500 companies does stem from overseas nations—what happens globally eventually does impact American investors. 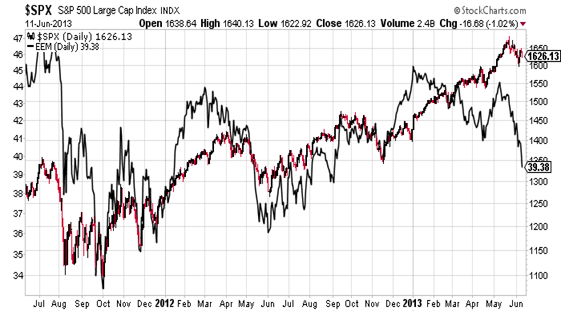