END_OF_DOCUMENT_TOKEN_TO_BE_REPLACED

2018, according to a majority of buttoned-down dart throwers...
I AM personally not yet convinced an ultimate bull market top is in despite the obvious similarities of the recent interim top to 2007, writes Gary Tanashian of Notes from the Rabbit Hole.
The first sign in this regard would be a loss of the October 2014 and August 2015 lows. But meantime, this could also be a 1998 clone, as we have noted by chart similarities and by global financial similarities (China/Asia).
However, in 2007 the stock market did a good job of forecasting the coming "Great Recession" (a sanitized way of saying 'impulsive unwinding of leverage'). Here is what economists think today (via this Bloomberg article).
2018 it is, according to a majority of buttoned-down dart throwers. 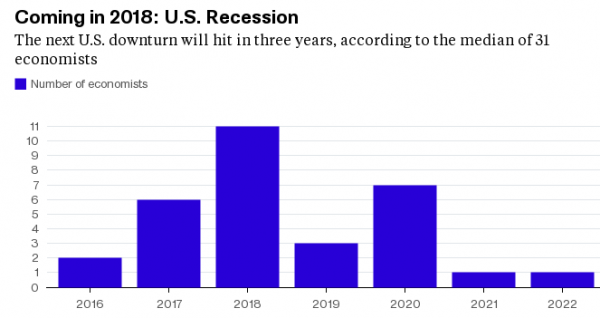 But what were they saying in December 2007? Let's take a look, also from Bloomberg...

"No Recession, But...
"The bottom line looks like this: The economists project, on average, that the economy will grow 2.1% from the fourth quarter of 2007 to the end of 2008, vs. 2.6% in 2007. Only two of the forecasters expect a recession, although it might feel like one if there's sluggish growth over the next couple of quarters, as many predict. Almost all think the risk of a downturn has risen substantially in recent months."

A year later came this from Bloomberg too...

The point is that the majority of experts usually do not (maybe even never) see recessions coming in advance. That is why they are economists. They will tell us all about its factors and elements after the fact. They will jargon us to death with all the why's and what for's after the fact.
Our job is to track events in real time, protect and deploy capital and most definitely not be part of the herd. In service to that, let's look at one more graph (courtesy of TradingEconomics.com, mark ups mine) and go on our merry way, having fully put in context the opinions of experts like Bloomberg's recent survey of 31 economists.
Despite already having the hindsight benefit of a readily quantifiable deceleration in economic activity (orange arrows) by December 2007, economists surveyed cautiously predicted 2.1% economic growth on average by the end of 2008. They were only off by about a million miles.

Today, with an uptrend in the GDP growth rate most economists do not see trouble until 2018 or later. Of course they don't, because all they do is extrapolate trends in good times, as with a similar uptrend leading into the 2001 recession (green arrows) and put their heads in the sand in questionable times (fading GDP into 2007).