END_OF_DOCUMENT_TOKEN_TO_BE_REPLACED

$50 oil might now be hurting US shale producers. But thank their hard work too...
WHEN we left off in 2014, I asked my subscribers, rhetorically "Who touched your life every day? Who changed it, meaningfully?" writes Byron King in Addison Wiggin's Daily Reckoning.
On a larger scale, "Who kept the US economy on the rails? Indeed, who changed the world?"
It was, of course, American oil workers. Collectively, over the past six years (certainly since the Crash of 2008), oil workers from Alaska to the Gulf of Mexico – and many locales between – generated a rebirth of the US energy industry.
What's the evidence? Well, who can overlook those "extra" five million barrels per day? Who denies that increased volumes of domestic oil have altered economies near and far? The following chart doesn't lie. 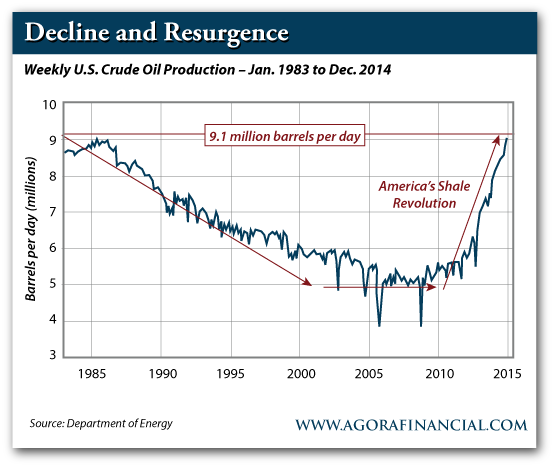 In my travels in recent years – over one million airline miles, and tens of thousands on road and rail – I've seen energy-based upheaval from counties and states, to the US (and Canada) as a whole.
That, and one cannot overlook energy-driven, re-correlations of international forces, up to geostrategic levels; indeed, the case of oil-dependent Russia pretty much speaks for itself.
Now add the Middle East and China to the energy mix. Yes, thank you, US oil workers!
"Yes, but..." came a few skeptical (and thoughtful) emails from subscribers. "Oil prices crashed by 50%," noted one gent. "The oil industry will lay people off, this year," opined another. "US workers are too expensive, over the long haul," declared a third reader.
True, true and "we shall see" is my reaction to those comments; that, and so what? Our new year is young, with a long road ahead. Anything can happen, and likely will.
Meanwhile, why deny a moment in the sun to people who have truly fought a good fight, and "won a war", in a manner of speaking.
That is, last year global oil prices fell because of US oil; a major national victory. Opec's price-fixing cartel is broken, after about 40 years of running the game; with much dust yet to settle, to be sure. Meanwhile, yes...in this new, lower-priced energy environment, energy-related industries will readjust, to include laying people off. As for wages in the energy industry? Again, per Turner, "You're observing the future!"
Change is coming, no doubt; but there's no denying a great run. According to the Wall Street Journal, the US oil patch has been a key job-creator in the past half-decade, certainly as compared with the rest of the national economy. US oil created jobs, and then some – in an otherwise stagnant, post-crash economy. 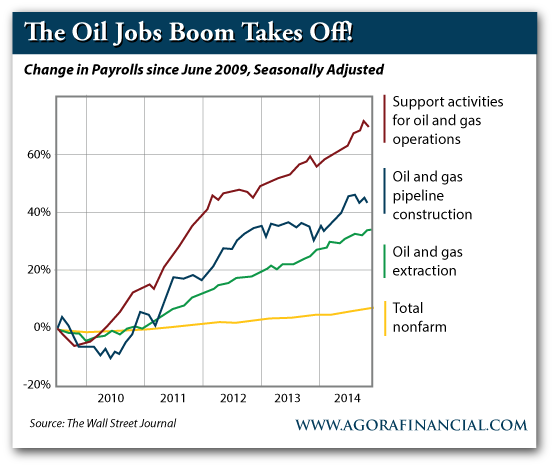 These weren't just "McJobs" jobs, either. No minimum wage, Walmart greeters for this industry. Oilfield work pays well; up to double the pay scales of workers in other sectors, per the Wall Street Journal again.
According to the US Labor Department, an average weekly wage in the energy extractive sector was $1700 near the end of 2014. Nice work, if you can get it.
As the old saying goes, the cure for high prices is high prices. The former $100 per barrel (and higher) price levels attracted capital into the oil sector, with elevated wages and costs to boot. Now, however, that particular $100-market dynamic has broken down.
How will it all settle out?
No more six-figure salaries for five-figure skill sets, I suppose. We already see the bow wave of a US/Canadian oil slowdown, with layoffs amongst operators, drillers, service and support companies. The idea is to cut costs, and husband cash when it flows through the front door.
It's bad, of course, if you're the one being laid off. In a bigger sense, though, lower oil prices will foster new levels of efficiency across the oil patch.
Consider Linn Energy (Nasdaq:LINE), which cut its dividend last week – thereby improving its beaten-down share price dramatically. For Linn, the idea is to save cash which, in a world of $55 oil, is exactly what you have to do. At the same time, Linn now makes itself more capable to support routine production drilling, and future lease acquisition efforts necessary to remain a player in the shale patch. Yes, higher oil prices would help; but for now, Linn has corporately bit a necessary bullet.
Amongst larger players, names like Exxon-Mobil (NYSE:XOM), Chevron (NYSE:CVX), Shell (LON:RDSA), BP (LON:BP) and France's Total are all paring back spending to conserve cash and preserve dividends. First to go are expensive, frontier exploration efforts in Arctic locales and ultra-deep water. Also, with large firms, there's significant headcount-reduction via routine retirements, buyouts, hiring slowdowns and more. It's what has to happen to keep cash flowing to investors.