END_OF_DOCUMENT_TOKEN_TO_BE_REPLACED

Signs are growing that the 'smart money' may have headed for the exit...
WHAT'S IN store for this week? asks the Daily Reckoning Australia's Greg Canavan.
Well, for a change, all eyes are firmly focused on the US Federal Reserve. This cabal of central bankers meet on Tuesday and Wednesday in the US to privately wonder what in God's name is going on...to contemplate the damage they have wrought across the world...and to nervously guess what move they should make next.
Of course, the minutes to the meeting will emerge a month later showing conviction and confidence in any decision made and discussion had. If you don't really know what you're doing, you at least should sound like you do.
After all, this is one big confidence game the Federal Reserve is playing. And lately, maintaining confidence has been a bit of a problem for the institution that sets the global price of credit. With all their unconventional monetary actions over the years, they have now got themselves into a spot of bother.
They're creating plenty of asset price inflation, but not much in the way of sustainable economic growth. They have come to the belated realization that increasing asset market speculation is bad for the economy. It actually makes things worse!
So in order to keep this speculation in check, Fed Chairman Ben Bernanke has introduced the word 'taper' into financial markets. As in he will soon (but not too soon) 'taper' the pace of asset purchases to wean markets off their heavy dependence on the Federal Reserve.
Like most things espoused by the Federal Reserve's largely academic board, it sounds good in theory. But markets couldn't give a hoot about theory. So they'll be listening intently to Bernanke's press conference following the board meeting this week. It he utters the wrong words, or gets the phrasing wrong, we could be in for a wild ride.
The market is already very nervous. Yields on US Treasury bonds are rising. Over the last 12 months, yields have jumped from 1.6% to around 2.2%. This is representative of monetary tightening across the board.
The chart below shows a sharp jump in the 30-year fixed rate mortgage.
US Mortgage Rates Spiking Higher 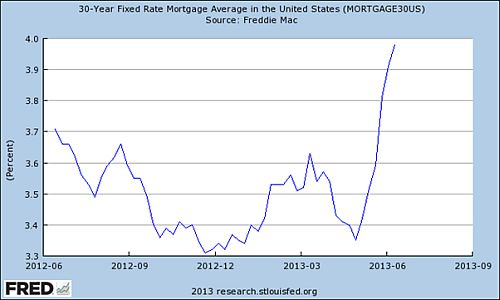 This next chart shows a spike in the borrowing costs for below investment grade corporates. With or without Ben Bernanke and the Federal Reserve, financial conditions are getting tighter.
Below Investment Grade Corporate Rates Spiking Higher 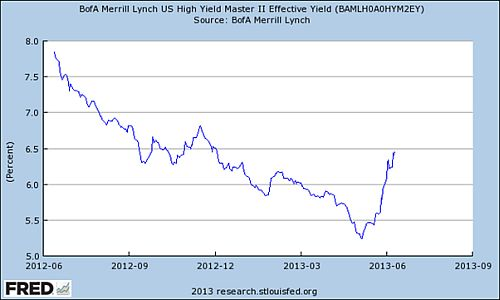 And emerging markets have felt the effect of monetary tightening emanating from the world's largest economy and manager of the global reserve currency.
Since peaking in January this year, the Brazilian market is down a whopping 22% and Mexico's bourse is off 14%. Asia is not far behind. Chinese stocks are down 13.5% from the peak in February, while Thailand (-10.8%), the Philippines (-15.6%), Indonesia (-8.7%) and India (-6.1%) are all down from their highs in May.
Now this might just be a correction and nothing to worry about. After all, interest rates are still incredibly low from a historical point of view. You could just be seeing a pullback following a central bank induced liquidity melt-up earlier in the year.
But given the inherent instability in the system...and the fact that nothing has changed to correct the problems that brought about the first big credit crisis in 2007, we would be inclined to take the recent market action as a warning sign of trouble to come.
To understand why, you need to understand how the financial system 'works'. The US economy is the source of global liquidity. Due to massive US budget and trade deficits, US Dollars (in the form of Treasury and mortgage securities) flow out into the world. Countries that stand to benefit the most from the deficit spending soak up the flow of Dollars with, in many cases, newly created domestic money and credit.
This has the effect of both financing over-consumption in the US and building up the foreign exchange reserves of the country in question...reserves which the domestic banking system can then use as a base to expand its own credit creation activities. It's a liquidity-creating positive feedback loop.
While the US economy, buoyed by cheap money, continues to spew ever increasing amounts of greenbacks into the financial system, and emerging market export-dependent countries continue to mop up those greenbacks and increase their 'foreign-exchange' reserves, credit and equity markets will tend to inflate.
But this global dynamic relies on confidence in the 'system' to go on creating enough Dollars and credit to keep the asset inflation going. And we think that confidence is beginning to wane.
So even though interest rates may still be historically low, it's the change in rates you should be looking at. And compared to a few months ago, financial conditions are now tighter. And tighter conditions in the US mean tighter conditions around the world. Monetary tightening doesn't usually inspire confidence amongst financial speculators.
Don't forget, the US fiscal consolidation plays a large part in this too. For the past five years, the US government has churned out $1 trillion plus budget deficits. But government spending is set to contract sharply following the repeal of the Bush-era tax cuts and some changes to spending.
The Congressional Budget Office (CBO) now projects that the federal budget deficit will total $642 billion in 2013 and $560 billion in 2014. Last year, the CBO estimated that the deficit would remain over $1 trillion in 2013 and reach $924 billion in 2014.
That's quite a tightening. The supply of new Treasuries is still high, but it's the change that's important and if the government can hit the CBO forecasts (unlikely) it will represent a significant fiscal contraction over this year and the next.
So you've got monetary and fiscal tightening going on behind the scenes, combined with hugely inflated, derivative driven asset market casinos where the players want to keep on rolling the dice.
But maybe not all the players. Perhaps what we've seen over the past month or so is the 'smart money' taking their chips off the table and exiting the building. When this occurred in past tightening phases, it was a prelude to a crash...