END_OF_DOCUMENT_TOKEN_TO_BE_REPLACED

Mining and refining capacity for uranium is concentrated in Russia and the CIS...

JUST LIKE the United States, says the Research Energy Team at Doug Casey's publishing group, the European Union relies heavily on Russia and the Commonwealth of Independent States (CIS) for its uranium.

This is shown in the chart below: 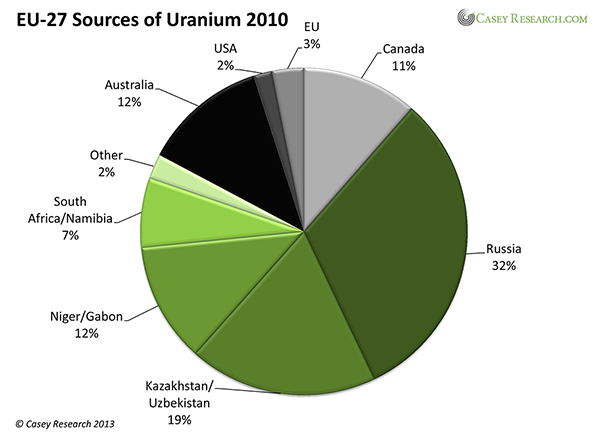 Russia is projected to produce 64 million pounds of uranium per year by 2020. The majority – 40 million pounds – will come from Russia itself, and the remainder from its foreign projects in Kazakhstan, Ukraine, Uzbekistan, and Mongolia.

But there's an often forgotten subsector of uranium production: the processes necessary to convert U3O8 into something that power plants can use.

For that purpose, yellowcake is first converted into uranium hexafluoride (UF6) at a conversion facility, then enriched, or concentrated, at an enrichment plant. Russia's main conversion facility is at Angarsk, with a capacity of 42 million pounds of uranium per year. A small facility near Moscow, rated at 1.54 million pounds per year, primarily converts recycled uranium.

Russia can claim about one-third of the uranium-conversion capacity worldwide. Rosatom, the regulatory body of the Russian nuclear program, is also looking to set up an additional conversion plant by 2015, with the planned capacity currently unknown.

The United States normally owns 20% of the world's conversion capacity; however, its plant, Metropolis, is currently shut down for maintenance and upgrades. Though the plant is scheduled to reopen in June 2013, the current shutdown just adds to the growing scarcity of UF6. 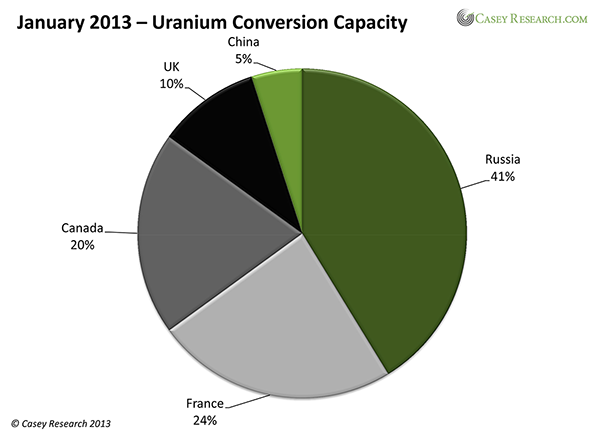 You may have noticed that the United States isn't listed in the chart above. As of January 2013, the US has no conversion capacity and isn't expected to be back online till mid- to late-2013. 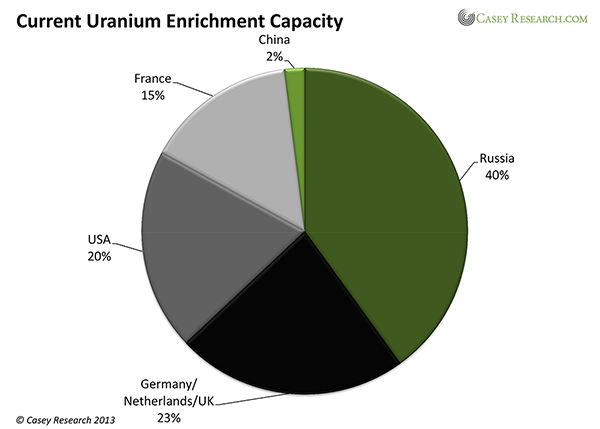 Almost half of the world's capacity to enrich uranium will lie in Russia once the country completes the planned expansion of its current enrichment facilities. Accordingly, the life source of reactors and power generation is not obtaining the uranium but having access to facilities that turn them into nuclear fuel.

Russian President Vladimir Putin is attempting to corner the uranium sector and the UF6 and enrichment markets alike. Russia's squeeze will be felt around the world – not only in regard to uranium supply but to enrichment as well.

It's difficult to say how Putin's squeeze on uranium will play out, but it's pretty certain to contribute to what is shaping up to be what we believe is a spectacular bull run in this energy subsector. The Casey Research Energy Team has put together an informative webinar with several nuclear-power and speculative investing experts. It is free to watch, starting Tuesday 21 May, at the link above.