END_OF_DOCUMENT_TOKEN_TO_BE_REPLACED

Protests over cuts are about the lies as much as the money...

COUNTRIES in Europe have a variety of pension schemes, writes David Howden for the Cobden Centre.

For our purposes here, I want to draw attention to the variety of public participation rates in the total pensioned assets among EU member states. Consider the following chart, courtesy of Lans Bovenberg and Caspar van Ewijk: 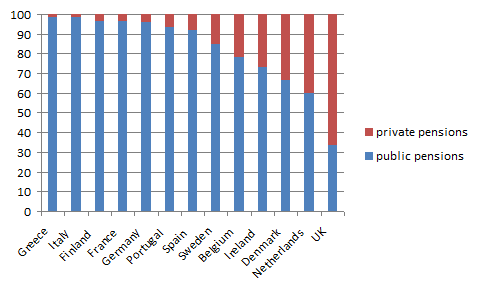 The UK stands out as the country that has, far and away, the highest portion of its pensioned assets in private plans. Some of the usual suspects, like Greece and Italy, round out the bottom of the list with almost all of their pensions in public hands.

Private pensions have many advantages over their public counterparts. These advantages are notable now more than ever. They help diversify risks for investors. With public pensions proving to be less safe than in the past, this is a welcome benefit. Private schemes don't leave investors exposed to the credit risk of their own governments. Private schemes deepen the capital markets, and allow for better allocation of funds than public (and government debt-centric) pensions. In sum, private pensions promote financial stability.

But there is one advantage that hasn't been getting much press. Countries with large private pensions make some unfortunate policy choices a little less difficult.

The sovereign debt crisis illustrates the need for European governments to scale back on their expenditures. Lacking an easy way to enhance their revenues, cutting back on services is the only way to stay solvent. Greece is the most evident case of this problem, but it exists in all EU countries to some extent. Voters don't generally get excited by the prospect of reducing public services. Or more correctly, they don't get excited by this prospect in a positive way.

Several governments are to the point where significant fiscal reform is now necessary in the quite immediate future to stave off a worse fate. The problem that past reform inaction now breeds is that there are few areas of the public sector that can generate cuts large enough to meaningfully scale back the respective budgets.

Public pensions comprise large swaths of the public budgets of all European states. Large cuts to pensions are not welcome, but they are one of the few areas where significant and timely cost savings can be made. Countries that have made changes to their public pensions in the past have seen much resistance. Violent riots erupted in Greece, and even France had its share of unfortunate reprisals.

This is largely to be expected. With few private alternatives, citizens of these states are left with an almost exclusive reliance on their public pension plans. It could have been a mistake for these people to believe that their public pensions would pay out their full benefits, but that is largely beside the point now. For a 50 year old Frenchman facing a future of pension cuts, there are now few prospects to augment his retirement income.

It should come as no surprise that citizens are hesitant to accept cuts to their pensions. Even those that accept that cuts must be made aren't thrilled by the cuts having to be made in a way that directly affects them.

Some countries, like the UK, should take notice of these developments and be optimistic. With the public pension scheme proportionately the smallest in Europe, it may face considerably less backlash in reforming than we have seen in other countries.

Of course, the British might look to the recent student protests over tuition and fee increases for university as the opening act for the reaction to the cuts to come. Yet, significant differences exist. Students privately fund only a very small portion of the total cost of their university studies. Going from a situation where one pays a small portion of the total cost to a larger portion is a significant increase in the total cost that they must bear. Any increase in private university fees shifts a comparatively large burden of payment onto students' pocketbooks.

As a thought experiment, imagine the student riots if the same education cuts occurred. Except instead of the current proportion of public and private expenses for University, imagine that only 25% of costs were publicly provided for, with the remaining 75% privately funded. Could anyone seriously imagine the riots being anywhere near the same magnitude if this funding balance was in place to begin with?

Rioting pensioners in Greece are no different than the students in Britain. They are both part of an entitlement system that promises to pay for large portions of expenses. One should not expect to see the same backlash when a system is changed that isn't publicly funded to the same extent, such as the public pension scheme in Britain.

People don't object to paying their own way. They do object to being lied to, or having promises reneged on. The public pension scheme in Britain provides one advantage to reform that its European neighbors don't have.