END_OF_DOCUMENT_TOKEN_TO_BE_REPLACED

DAVID CAMERON and George Osborne (in his Budget speech last week) have committed the UK government to a policy of "monetary activism".

The intention is obvious. They want to use monetary policy to support growth in an environment in which other factors – fiscal tightening and the Euro crisis – are holding back the UK economy, writes former Bank of England Monetary Policy Committee member Andrew Sentance.

This sounds good in theory. But in practice it won't work. There are three good reasons why we should not try to apply a programme of further monetary stimulus to the UK economy in the present circumstances.

First, the UK economy is not as badly placed as the current media debate would suggest. Among the G7 economies, we have the second-highest rise in living standards (behind Germany) in the 21st Century: 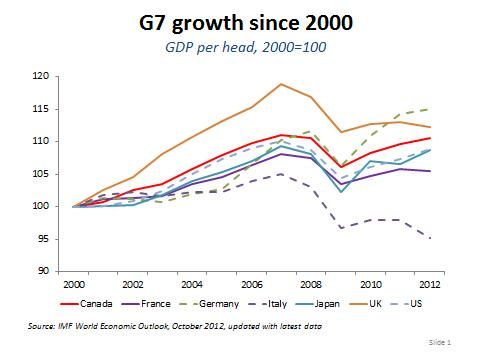 Employment growth has been especially strong, with over a million private sector jobs created since the trough of the recession. And our unemployment rate remains below 8%, compared with the situation in the early 80s and early 90s recessions when unemployment rose above 10% for a sustained period. These positive economic trends undermine the argument for further stimulus.

Second, we already have very extreme monetary policy settings designed to stimulate economic growth. The official UK Bank Rate has been sustained at a historic low of 0.5% for four years already. And the Bank of England has already accumulated a third of the national debt through its Quantitative Easing programme of purchasing UK government bonds. Despite these aggressive stimulatory policies, we have not seen a return to strong UK economic growth. And it is therefore doubtful that further stimulatory policies would have a beneficial effect.

Third, UK inflation is high. At 2.8%, CPI Inflation is above the 2% target and current forecasts from the Bank and independent forecasters suggest it is set to rise further. Inflation has averaged around 3.5% in the past three years – and the stimulatory policies pursued by the Bank of England Monetary Policy Committee (MPC) have added to recent inflationary pressures. In particular, money creation has depressed Sterling and aggravated imported inflation even though wage growth has been subdued.

So the danger is that further "monetary activism" by the Bank of England is not needed, will not work, or will just add to inflation.

What should the Bank do instead? Despite various tweaks to the monetary policy framework announced in the Budget, the target for the MPC remains 2% inflation – which is a working definition of price stability. That remains a sound objective. But we have not seen a sustained period of inflation around this level since the mid-2000s. So the first thing that the MPC should do is ensure that they steer inflation back to the 2% target.

This may require higher interest rates, but that might not be a bad thing. Low interest rates are a short-term palliative for the economy and if we become too dependent on low borrowing costs, this can be a drag on growth, as Japan found out in the 1990s and early 2000s. Also, savers are suffering heavily in the current climate of extremely low interest rates. That is not a good signal in terms of the incentive to save and invest – which is a vital ingredient for longer term economic growth.

We should replace the emphasis on "monetary activism" with "monetary realism". While monetary policy can help stabilise the economy in the short-term, as it did in 2009, it cannot drive growth in the long run. Indeed, our experience in the past has been that very expansionary monetary policies just end up supporting higher inflation –and we have already seen signs of this in the UK in the past few years.

In addition, if the UK government appears to be changing the Bank of England's monetary remit to suit its own political agenda, that is a serious threat to the Bank's independence and credibility. So Cameron and Osborne should be careful. We need monetary realism, not an activist monetary programme. Attempts to force growth higher with monetary policies have generally ended with higher inflation or financial instability. "Monetary activism" is likely to end in tears...