END_OF_DOCUMENT_TOKEN_TO_BE_REPLACED

SINCE the election of Donald Trump as President on 8 November 2016, traders have bid-up the combined values of the US stock market indexes by roughly $5.7 trillion, writes Gary Dorsch at Global Money Trends.

That's the biggest gain in such as short period in time in the history of Wall Street.

Bullish traders have become fabulously wealthy, as they correctly bet that the slim Republican majority on Capitol Hill would be able to muscle through the largest tax overhaul in 30 years. The bulls were undeterred during months of false starts and a special counsel probe, during Trump's first year in office. 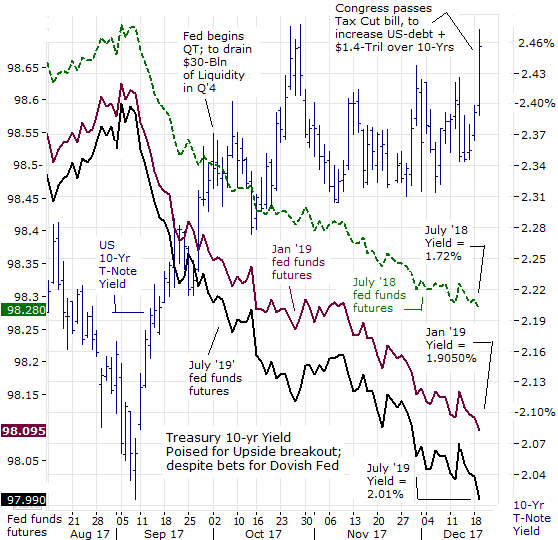 "Just what the country needs to get growing again," said Senate Majority Leader Mitch McConnell (R-Ky) as he closed in on a $1.5 trillion package that would give generous tax cuts to corporations and the wealthiest Americans – Trump and 14 Republican Senators among them – and more modest tax cuts to low- and middle-income families.

McConnell shrugged off polls finding scant public enthusiasm for the measure, saying the legislation would prove its worth. "Big bills are rarely popular," he said. The Republican party views passage of the tax cuts as crucial to retaining its House and Senate majorities in next year's elections.

"This tax bill will be an anchor around the ankles of every Republican. If they haven't learned it yet, they will learn it next November. Republicans will rue the day they passed this bill and Americans will never let them forget it.

"What has been sold as a job creator and wage booster will, of course, do little of either as companies are already initiating stock buybacks worth hundreds of millions of Dollars instead of hiring more workers and raising wages. Ultimately, Republicans have taken what they called a once-in-a-generation opportunity on tax reform and squandered it on corporate welfare and tax cuts for the rich."

The Joint Taxation panel says the tax cuts would widen the US's federal shortfalls by $1 trillion over a decade, even when factoring in economic growth that lower taxes would stimulate. It's an unusual example of deficit spending with tax cuts at a time when the economy is already expanding at more than 3%.

Trump's tax bill would cut the corporate income tax rate to 21% from 35%, and would create a 20% business income tax deduction for owners of "pass-through" businesses, such as partnerships and sole proprietorships; and allow for the immediate write-off by corporations of new equipment costs; and eliminate the corporate alternative minimum tax.

Under a new territorial system, the bill would exempt US multi-national corporations from taxes on most of their future foreign profits. It also sets a one-time tax for companies to repatriate more than $2.6 trillion now held overseas, at rates of 15.5% for cash and cash-equivalents and 8% for illiquid assets.

Once passed by Congress, the changes would be in effect for 2018 taxes, with tax returns for 2017 unaffected. J.P.Morgan chief Jamie Dimon is a big proponent of corporate tax reform. "Some companies will raise wages. Some will buy other companies. Some may increase dividends and buybacks. Don't act like that is a bad thing. That is their money. Think of it as a QE-4. That money gets recirculated in the American system."

After the bill passes "probably a trillion Dollars will come back from overseas," he added in December. "Cumulatively over time that will accelerate growth in the American economy."

Once the plan is signed into law, workers could start seeing changes in the amount of taxes withheld from their paychecks early next year, lawmakers said – though taxpayers won't file their 2018 returns until the following year.

As such, a bond market bubble is the biggest threat to the US-economy right now, warns former Federal Reserve chief Alan Greenspan.

"By any measure, real long-term interest rates are much too low and therefore unsustainable. When they move higher they are likely to move reasonably fast. We are experiencing a bubble, not in stock prices but in bond prices. This is not discounted in the marketplace."

Greenspan says that would lead to the worst bout of stagflation since the 1970s, a period when inflation accelerated amid a stagnating US economy.

Bullish analysts on Wall Street generally believes that under the guidance of the next Fed chief, Jay Powell, borrowing costs will stay low in 2018. For that reason, markets are generally unprepared for a possible surge in US interest rates that could occur. The big surprise could be sharply higher 10-year Treasury yields, and that's something that investors are not really positioned for.

Three catalysts could drive the 10-year yield higher. First, economies all around the world accelerating. Secondly, the tax package will fuel a faster rate of growth. Third, is the potential for inflationary pressures to increase as labor markets get tighter and tighter. The rate of unemployment has already dropped to 4.1% and as the economy picks up speed, employers may have to pay higher wages to attract increasingly scarce talent.

Right now, traders in the fed funds futures markets are only anticipating two quarter-point Fed rate hikes by the middle of 2019, to a mid-point of 1.875%, even though the Fed itself is projecting 4 rate hikes to 2.375% by then.

There is great skepticism about the independence of the next Fed chief Jay Powell, who is a lawyer by trade, and is a novice about the psychology of the financial markets. Powell is expected to be under the control of the Trump Treasury and the president's economic adviser, Gary Cohn, the covert No.2 man from Goldman Sachs.

Mr.Powell could even be more dovish than curreny Fed chief Janet Yellen, whose ultra-easy money policies helped to massively inflate the fortunes of the ultra-wealthy invested in the US stock markets.

However, the Republican plan to stimulate the economy with tax cuts is going to put the Fed in a bit of a box because this fiscal stimulus with a 4% unemployment rate heading into the ninth year of an expansion, might cause the long dormant bond-market vigilantes to reawaken, and jolt longer-term bond yields higher than otherwise.

For investors in the US T-bond and corporate bond markets, the Republicans' tax cuts probably signals the beginning of a bear market.