END_OF_DOCUMENT_TOKEN_TO_BE_REPLACED

At FIRST BLUSH, the presidency of Donald Trump couldn't be more different from that of Jimmy Carter, writes Frank Holmes at US Global Investors.

Among the interesting parallels?

Of course, that's just one opinion. Last week I came across another, quite different view, at the Cornerstone Macro Conference in New York City.

I want to thank Cornerstone CEO Nancy Lazar for another successful, thought-provoking conference. Like US Global Investors, the analysts at Cornerstone believe that government policy is a precursor to change, and they closely track the purchasing manager's index (PMI).

One of the speakers I was privileged to hear was Paul Gigot, the Pulitzer Prize-winning editor of the Wall Street Journal's editorials page. Gigot spoke specifically of Trump's leadership style, comparing it to Ronald Reagan's.

Reagan was more strategic than Trump, whereas Trump is more tactical than Reagan. But neither President, according to Gigot, is fond of sitting down and diving into pages' worth of briefing notes. Instead, they prefer to invite around three of their top Cabinet members and advisors to provide a rundown of the news and debate certain topics. Trump then makes a decision with his gut, Gigot says.

Gigot pointed out how Mnuchin prepares for his meetings with Trump. No other secretary, he says, comes in with a "cheat sheet" of trade deficits for nearly every country the US does business with. Mnuchin can then fire off the data when Trump asks for it.

Take a look at the chart below. It shows the US trade balance with its top 10 trading partners, comparing July 2019 to the same month a year earlier. In all but one case (China), trade has fallen further into deficit from 12 months ago. 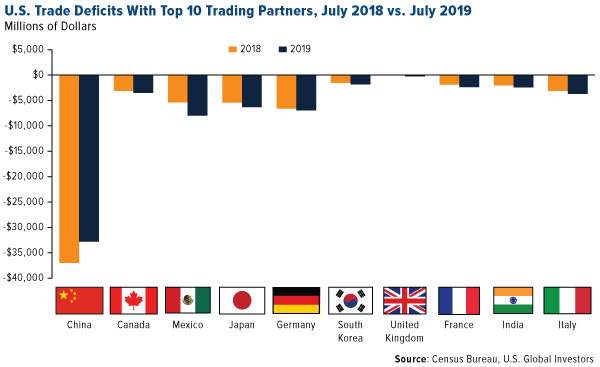 In another presentation, international energy consultant Robert McNally pointed to the one thing that could derail Trump's reelection bid: IMO 2020.

IMO, in case you don't know, stands for International Maritime Organization. Beginning 1 January 2020, all ships worldwide will need to slash sulfur oxide emissions by over 80%, to no more than 0.50% of all emissions.

Shipping must do this by switching to low-sulfur – and yet costlier – fuels, which is likely to have the effect of making it more expensive.

I like to say that government policy is a precursor to change, but in this case, IMO 2020 is a United Nations (UN) resolution. And as always, intentions are good, but this will have unintended consequences.

It's expected that IMO 2020 will drive up the price of diesel, marine and jet fuels, not to mention heating oil in states such as Pennsylvania, Ohio and New York. The rise in consumer prices could end up weighing on the economy, and this has never reflected well on the incumbent President, whether he's responsible or not.

McNally calls IMO 2020 a "sleeper" rule. Few people are talking about it right now, but that will undoubtedly change come January. In this respect, it's not unlike FAS 157 – also known as "mark-to-market" – the little-known accounting rule that some say caused the 2007-2008 financial crisis.

Below is the Invesco Shipping ETF (SEA), which invests in high dividend-paying companies in the global shipping industry. It's been trading choppy lately because of the trade wars, but I expect it to turn up the closer we get to January. High-quality shipping companies have a better chance of being compliant, and the penalties will be high for non-compliance, from fines to even jail time for the ship's captain. 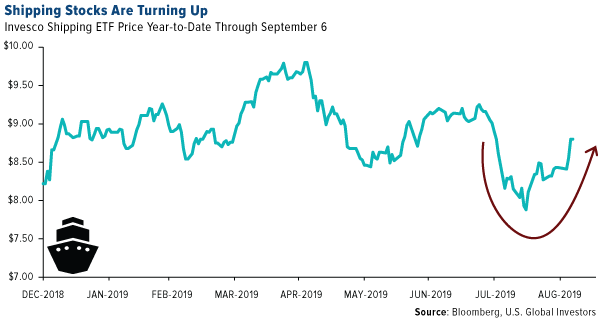 Deficits and federal spending were top of mind for many speakers and attendees at the conference. For the 2020 fiscal year, the federal budget deficit is expected to hit a massive $1 trillion – the first time in US history that it will have expanded so rapidly in a time of peace and prosperity.

The most recent estimate by the Congressional Budget Office (CBO) puts total federal debt at a whopping 144% of gross domestic product (GDP) by 2049. This level of debt is not only unprecedented but also unsustainable. It puts everyone's financial security at risk. 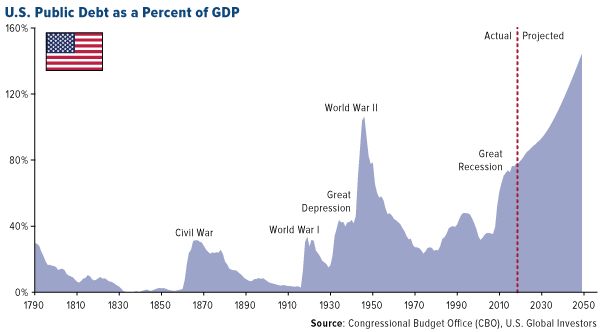 And if you've been keeping up with the Democratic Presidential debates, things could get even worse.

Medicare-for-all, the Green New Deal, reparations – these programs, while admirable and potentially beneficial, would add trillions more to the already-ballooning national debt.

Remember, it's the policies that we should be paying attention to, not partisan politics.

Years ago, it might have taken $1 trillion to move the US economy by 2% of GDP. What is that number today? It might take $10 trillion or more.

Speaking of debt, you may have heard that a record number of companies are seeking new finance in the bond market.

It's no coincidence they have rushed to the trough all at once. Average yields for investment-grade corporate debt are near an all-time low right now, making borrowing very inexpensive and attractive. Apple, Deere, Walt Disney and Coca-Cola were among the record 49 companies that issued as much as $54 billion in just 1 week in September. Apple alone sold $7 billion, its first bond deal since 2017. 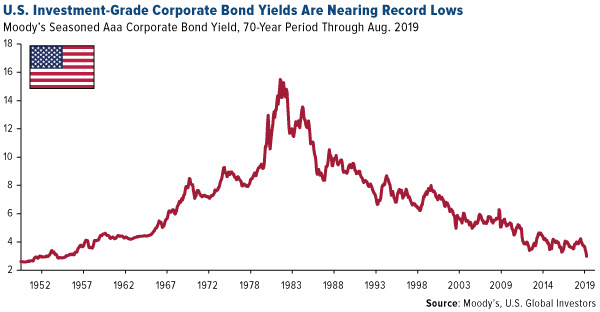 This brings me to my final point, and it's an important one.

Yields are at historic and near-historic lows, and they could be heading even lower sooner rather than later. The question you must ask yourself is how you will be positioned going forward.

In a recent blog post, Rick Rieder, chief investment officer at BlackRock, writes that we could be at what he calls the "monetary policy endgame". In recent years, central banks have deployed nearly everything in their arsenal, including zero and negative interest rates and quantitative easing (QE).

The last stage could very well be extreme currency debasement. For that to happen, rates would need to be taken deeper and deeper into negative territory as economies compete for the weakest currency.

"How should one position for such an endgame?" Rieder asks. The solution, he says, "is to hold an asset that maintains its real value – an asset that cannot be printed."

Such assets include dividend-paying stocks and "commodity currencies," including gold, which is limited in supply and expensive to extract.

And the worst assets? According to Rieder, these would include "a sovereign bond with a negative yield, closely followed by paper money at zero yield, both with a theoretically infinite supply."

That's the power of scarcity. When coupled with the slow debasement of currencies, it's enough to push the price of gold up to as high as $10,000 an ounce. As I told Daniela Cambone last week in Kitco News' New York studio, we aren't going to see $10,000 gold in the next 12 months.

But with yields in freefall, and radical currency debasement estimated to happen by the world's central banks, where else will investors be able to turn? Real assets that have a limited supply and intrinsic value.