END_OF_DOCUMENT_TOKEN_TO_BE_REPLACED

What Trump's stunning US upset means for world markets...

LIKE their British counterparts, who voted in June to cut ties with the European Union (EU), American voters resoundingly rejected globalism last week, writes Frank Holmes at US Global Investors.

That calls into question the United States' involvement in military alliances such as the North Atlantic Treaty Organization (NATO) – which is 72% funded by US tax Dollars – and international trade deals, from the North American Free Trade Agreement (NAFTA) to the Trans-Pacific Partnership (TPP).

Over the course of his campaign, Donald Trump sharply criticized such groups, vowing either to renegotiate the terms or pull out of them altogether. The future of the Paris climate agreement, ratified by over 100 countries as of this month, has also been thrown into uncertainty.

We all remember how Brexit was inaccurately predicted, with polls saying the referendum would fail. In a modern-day equivalent of "Dewey Defeats Truman", US polls also got the presidential election spectacularly wrong, missing the forest for the trees. Many polls, including CNN, Huffington Post and the Princeton Election Consortium, had Clinton's chances of winning above 90%. 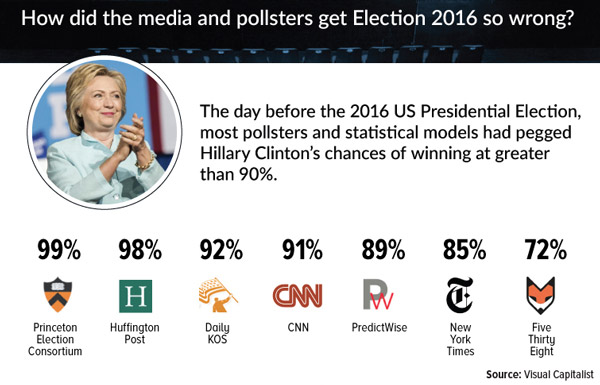 But in a reverse example of the so-called "Bradley effect", which I shared with you before, people told pollsters one thing but did the exact opposite in the privacy of the voting booth.

US voters largely repudiated political correctness, the Washington establishment and a biased media. They demanded sweeping, fundamental changes, and yet another Clinton or Bush just wasn't the person for the job.

Zero Hedge quoted Nassim Taleb, scholar and author of "Black Swan: The Impact of the Highly Improbable" who put into words this frustration:

What we have been seeing worldwide, from India to the UK to the US, is the rebellion against the inner circle of no-skin-in-the-game policymaking "clerks" and journalists-insiders, that class of paternalistic semi-intellectual experts with some Ivy League, Oxford-Cambridge, or similar label-driven education who are telling the rest of us 1) what to do, 2) what to eat, 3) how to speak, 4) how to think...and 5) who to vote for.

In an interview on NPR, Alfonso Aguilar of the Latino Partnership for Conservative Principles spoke about the somewhat surprising election results, particularly among Latino voters, who were expected to hinder Trump's chances of winning, especially with Trump's comments about Mexican immigrants and immigration proposals.

However, Aguilar commented that the reason 29% of the Latino vote went to Trump was because of the same issues cited by other American voters, namely jobs and the economy.

Our readers saw this coming. National polls and financial publications might not have gotten it right, but you did. In an October 31 Frank Talk poll, I asked who you predicted would win the election. A third of you said Hillary Clinton, the other two thirds, Donald Trump. Our readers joined some neural network models and Jeffrey Gundlach, the DoubleLine Capital CEO and a PhD mathematician, as some of the few who accurately predicted the outcome, beating the mega media channels.

World markets appeared to have wagered Clinton would win, judging from the sell-off that ensued after it became clear Trump could pull off an upset. The one notable exception was Russia, as hopes improved that the US – led by Trump, who has expressed admiration of Vladimir Putin – would lift economic sanctions against the Eastern European country.

Domestic stocks, however, were pointing to a Trump win all along, echoing the presidential election cycle that I've written about many times. In the three months ended October 31, the S&P 500 Index fell about 2%, and even more recently, the S&P 500 closed down for eight days in a row, the longest losing streak since October eight years ago.

Historically, any loss during this period has foreshadowed a victory by the non-incumbent party candidate. 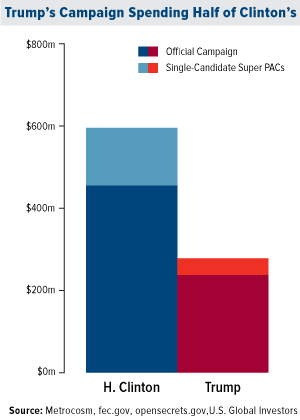 America just endured its first presidential election in which the majority of the electorate got its news from social media, says AdAge.

Those worried about the bias of mainstream media need not worry, as it seems a majority of voters were paying more attention to discussions being had, and news being posted, on non-unionized social media. Both candidates utilized social platforms. Trump's Twitter account in particular gave a no-frills view of his personal thoughts throughout the entire campaign...to all of his 14 million followers.

A Reuters article explains the cost effectiveness of social media on the campaign trail, saying  Trump's win has "upended prevailing concepts about the influence of money in American politics and raised question of whether a lean, media-savvy campaign can become the new model for winning office in the United States." In fact, Trump is approaching, or may have passed, $100 million from donors who have given "small" donations of $200 or less, reports Politco.com. This surpasses the small donations made throughout the campaigns of many Democrats before him – the most memorable, perhaps, being Barack Obama's.

Like the British Pound following Brexit, the Mexican Peso tumbled dramatically, dipping to a record low on the heightened possibility that Trump, with the cooperation of a Republican-controlled Congress, would tear up NAFTA and make good on his promise to build a "big, beautiful" wall along the nearly 2,000-mile US-Mexico border.

Such a wall is estimated to cost between $15 billion and $25 billion. 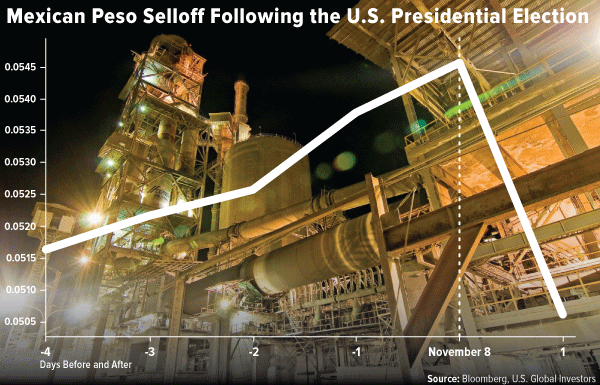 Infrastructure names such as Vulcan Materials and Caterpillar rallied last Wednesday morning. Other winners included drug makers and pharmaceuticals, driven by the apparent relief that price controls would not be imposed under a Clinton administration. Private prison stocks such as Corrections Corp. and GEO Group also surged, as did global defense firms Northrop Grumman, Lockheed Martin and Raytheon.

A Trump presidency could be good news for the financial industry. Back in August, Trump announced that, if elected, he would place a "temporary moratorium" on new financial regulations, such as the Labor Department's fiduciary rule, which regulates how financial advisors service clients. In fact, as laid out in Trump's first 100-day plan, he wants to implement a rule that eliminates two regulations for every one new regulation. As I've written about previously, this is very similar to what former Canadian Prime Minister Stephen Harper proposed – Canada's "One-for-One Rule" introduced in April 2012.

If Trump has his way, taxpayers will be winners also. Many economists agree that cutting taxes will be good for corporate earnings, and by extension, the investing public. As Deutsche Bank points out, the Republicans want to "lower the effective corporate tax rate and try to stimulate growth and hopefully this causes the tax cut to pay for itself over time."

Going forward, losers could include multinational technology firms that manufacture some or all of their products in China (Apple and Microsoft, for instance) and retailers that mostly sell Chinese-made goods (Walmart). The new president-elect has expressed interest in levying tariffs on Chinese imports, which, I was surprised to learn, he could very well do through the Office of the United States Trade Representative (USTR) and Commerce Department.

This would certainly push inflation up – raising prices on everything from TVs to iPhones to shoes to houseware – which in turn could light a fire under the Fear Trade.

Gold had a phenomenally volatile day last Wednesday, the biggest since Brexit. It rose as much as $60, breaching $1300 an ounce, before ending the day down after US equities rose and the Dollar strengthened.

Gold ended down on Wednesday last week after an extremely volatile day.

Now that the initial shock of Trump's win is over, the next big test for the yellow metal's movement is the possibility of a December rate hike. Although gold continues to find support from low to negative government bond yields, we can likely expect the metal to remain relatively flat, at least until we know what the Federal Reserve's next move will be.

As I shared with you in a recent Investor Alert, HSBC analysts predict a Trump win will be extremely bullish for gold. According to analyst James Steel, Trump's "protectionist" policies could have a negative impact on global trade and increase federal deficits, which would be supportive of gold. The bank sees gold rising to as high as $1500 an ounce by year-end.

In this environment, investors can keep in mind that short- term municipal bonds have been much more stable than two-year and five-year government bond yields, especially with the probability that the Fed will raise rates next month.

I invite you to join our upcoming webcast on gold, taking place this Thursday, November 17, at 3:30pm Central Time (GMT-6). I hope to share further insight into the world of gold and how the landscape is evolving – from the presidential election, to political events around the world, to the rise of complex algorithms influencing our daily lives. We believe that gold remains attractive for investors worldwide and hope that you'll join in.