END_OF_DOCUMENT_TOKEN_TO_BE_REPLACED

JUST OVER a year ago, the US president elect Donald Trump was in a hurry to fire the first shot in a currency war with Germany, writes Gary Dorsch of Global Money Trends.

It had just accumulated a $90 billion trade surplus with the US in the previous 12 months. The Euro currency had fallen to as low as $1.05, its cheapest since 2003.

Trump threatened Bayerische Motoren Werke with a 35% import tax for foreign-built BMW cars sold in the US. He advised BMW to scrap plans to open a new plant in San Luis Potosí, Mexico and instead, urged BMW to build the factory in the US.

Quoted in Germany's Bild newspaper, Trump portrayed the EU as an instrument of German domination designed with the purpose of beating the US in global trade. For that reason, Trump said, he's fairly indifferent to whether the EU stays together, according to Bild.

On 31 January 2017, Trump's top trade advisor Peter Navarro accused Berlin of using a "grossly undervalued" Euro to "exploit the US and its EU partners." News of the statement sent the Euro surging and the US Dollar tumbling. 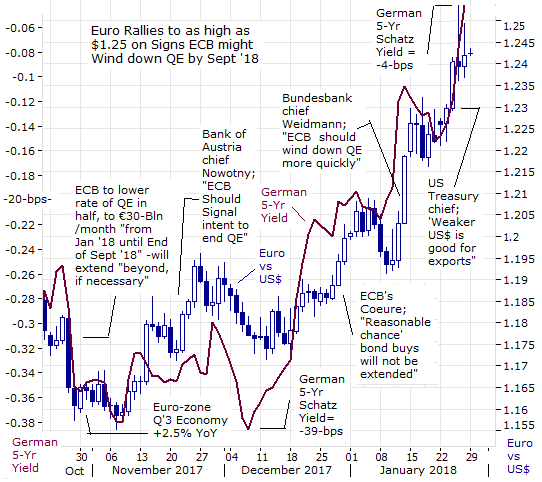 Navarro, the head of Mr.Trump's new National Trade Council, told the Financial Times in January last year that the Euro was like an "implicit Deutsche Mark" whose low valuation gave Germany an exporting advantage over its main partners.

The Euro is far weaker than the Deutsche Mark would have been, Navarro said. This means that Germany's decision to abandon its old currency in favor of the Euro was a disguised devaluation. Imagine a Euro breakup. Almost everyone would agree that the new D-mark would soar in value, making Germany much less competitive.

These comments highlighted a bold willingness by the Trump administration to antagonize EU leaders and particularly Angela Merkel, the German chancellor. Trump called the EU a vehicle for Germany. In Berlin, the German Economy Ministry's spokeswoman Tanja Alemany responded by saying:

"Interest-rate expectations and the resulting impact on the exchange rate is something the German government can't influence.

"Of course it's obvious that a low exchange rate against the US Dollar makes our products cheaper abroad, which tends to boost exports."

However, German Finance Minister Wolfgang Schaeuble could read the writing on the wall, and he told the Sueddeutsche Zeitung newspaper the ECB should start unwinding its QE policy in 2017.

"The ECB will have the tough task of getting out of the ultra-expansionary monetary policy. It would presumably be right if the ECB dared to exit this year."

Schaeuble warned that inflation could reach +3% in Germany and would inflame criticisms about negative interest rates. Schaeuble's deputy, Jens Spahn, added a "prudent start to the exit" of the ECB's expansive monetary policy is desirable.

Four months later, on 22 May 2017, German Chancellor Angela Merkel declared in a speech in Berlin:

"The Euro is too weak due to the ECB's policy and with this, German goods are comparatively cheap."

Currency traders interpreted this simple statement to mean that Berlin had finally relented and gave the green light for a stronger Euro and an exit from QE.

"While there are still factors that are weighing on the path of inflation, at present they are mainly temporary factors that typically the central bank can look through. All the signs now point to a strengthening and broadening recovery in the Euro area. Deflationary forces have been replaced by reflationary ones."

But the ECB also added that this would extend "beyond, if necessary" and "until inflation path has sustain-ably adjusted."

Instead of rising on the cut to QE, interest rates and the Euro fell in a kneejerk reaction to ideas that the ECB might extend QE into 2019 and beyond, because of that escape hatch the ECB had just inserted. The yield on Germany's 5-year note fell to minus 36 basis points, and the Euro fell to $1.16 versus the US Dollar.

However, the Eurozone's economy grew faster than expected in Q3 2017, expanding at a 2.5% annual clip as unemployment fell to 8.9%, its lowest in almost nine years. That backed up the move to begin reducing QE. Berlin stepped up the pressure on the ECB to scale back its purchases of bonds and start moving to raise sub-zero rates.

"If we have more growth and if there is no threat of a deflation, then the ECB can slowly start to normalize monetary policy so that we can soon end this crazy situation of zero interest rates and negative interest rates."

On 21 November 2017 the man in charge of the ECB's money-printing scheme said he expected the ECB to mothball QE in September 2018. Benoit Coeure, the ECB director in charge of its market operations, told Handelsblatt "It will come at some point between now and September 2018." Within 24 hours of his comments, the Euro jumped 1.5 cents to $1.20 and the yield on Germany's 5-year note rose to minus 20-bps.

On 12 Jan 2018 Bundesbank chief Jens Weidmann – one of the staunchest critics of the ECB's ultra-easy policy – repeated his view that the central bank should be winding down its €2.55 trillion bond-buying scheme ($3.10 trillion) more quickly. On January 15 this year Ardo Hansson, Estonia's central bank chief said the ECB shouldn't have any problems ending its bond purchases in one swoop after September:

"There are certainly good reasons to reduce the importance of the net purchases in our communication soon – also with a view to a potential end to these purchases."

If growth and inflation continue to evolve broadly in line with the ECB's latest projection, it would "certainly be conceivable and also appropriate to end the purchases after September," he said. "The last step to zero is not a big deal anymore," Hansson said. "You do not have to do a lot of fine-tuning. I think we can go to zero in one step without any problems."

Yet on 25 January this year US Treasury chief Steve Mnuchin caused uproar in Davos, Switzerland when he welcomed a weaker US Dollar, arguing that it was good for US trade. Commerce Secretary Wilbur Ross added that "US troops are now coming to the ramparts" in global trade wars. His comments helped to briefly push the Euro above $1.25, a milestone achievement for the Trump team.

A year earlier Team Trump had begun pressuring Berlin behind the scenes for an end to QE in order to raise the exchange rate of the Euro. All that clandestine activity succeeded in lifting the Euro 20 cents higher.

The day after Mnuchin's comments, on 26 January 2018, German five-year yields hit their highest in two years after the ECB's Benoit Coeure said he saw complacency in financial markets towards inflation risks. Five-year German bond yields hit their highest level in over two years at minus 3-bps, just within sight of zero per cent. German long-dated yields were set for their sixth straight week of rises, their longest run of weekly increases since 2010. Germany's 10-year Bund yield headed back towards the six-month high of 0.58%, after the ECB said it had gained confidence that inflation would rise back to its target of +2%.

The impact of the Euro's sharp rise against the US Dollar was also felt in the equity markets, where the Dow Jones Industrials far outpaced the German DAX multi-nationals over the past 12-months.

The Dow Industrials index is 32% higher compared to a year ago, compared to Germany DAX's 12% gain. The stronger Euro reduces the revenues of German affiliates operating overseas, and could lead to lower German exports in the year ahead. Traders will want to see if the ECB draws a red line in the sand for the Euro at $1.25 and whether the Fed will act to hike the fed funds rate by more than 50-bps this year.