END_OF_DOCUMENT_TOKEN_TO_BE_REPLACED

"The REASON our stock market is so successful is because of me," US President Donald Trump bragged to reporters last month, write Benn Steil and Benjamin Della Rocca for the Cobden Centre in this article first published at Foreign Affairs.

There is no arguing that markets have been buoyant since his election thirteen months ago: the S&P 500 index is up 28%. But is the president right to credit himself?

A wider and closer look at the numbers shows he is not. With the exceptions of a post-election bump, subsequently reversed, and the recent boost from Republican tax cut legislation, which the president has merely cheerled from the sidelines, the markets have done no more than reward US stocks for riding the coattails of global growth.

How do we know? In order to evaluate the president's role in changing the valuations of US companies, we analyzed stock prices statistically to extract the market's expectations of earnings prospects around the world. Comparing movements in earnings expectations between the United States and other nations allows us to gauge to what degree the US market actually stands out. After accounting for observable differences in extraneous factors that affect stock prices in each national market, such as the cost of equity capital and current corporate earnings, here is what we found. 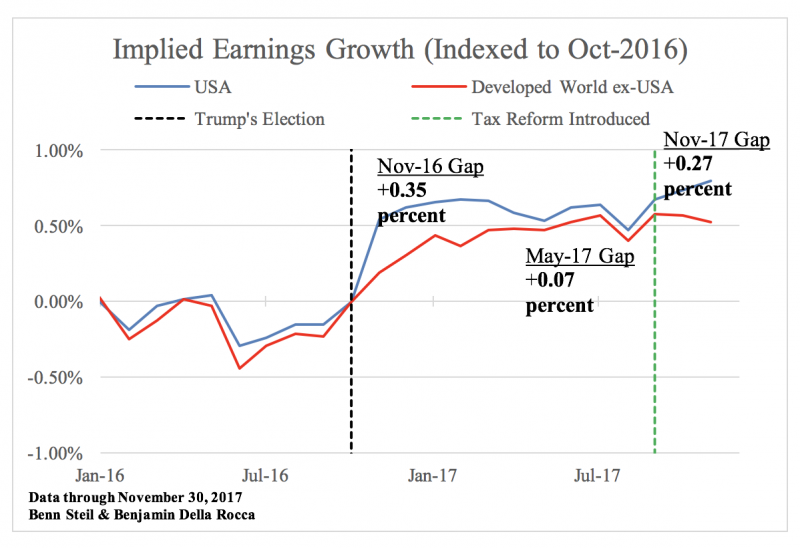 Right after Trump's election in November 2016, the market's expectations of US corporate earnings growth reflected in US stock prices – so-called implied earnings growth (IEG) – soared, as shown in the figure above.

Meanwhile, IEG on stocks in the rest of the developed world (Australia, Canada, the Eurozone, Japan, and the United Kingdom) continued upward at the same milder trajectory it had been on since July that year, following the United Kingdom's Brexit referendum. Since US IEG had moved in lockstep with the developed world average to that point in the year, the post-election deviation suggests that investors were indeed sanguine about prospects for growth-friendly policy change in the United States. But this divergence was short-lived.

US IEG plateaued in December and, as it became clearer that the president's policy agenda was stalling, began declining in early 2017. Infrastructure spending was going nowhere; the president's relations with Congress were souring. There was the looming prospect of a trade war with China and the North American Free Trade Agreement partners. So despite rising stock prices, IEG actually fell fairly steadily into the summer.

By May of this year, the post-election US IEG increase was no greater than that for the rest of the developed world. That is, the "Trump effect" on stock prices was precisely nil: the US market under Trump had done no better than its peers abroad. Investors loved Canadian stocks, European stocks, and Japanese stocks just as much, even though the policy agendas under which those companies operate are very different from those in the United States.

In October, however, US IEG again turned upward while it stalled elsewhere. The reason? Tax cuts. GOP leaders revealed their "unified framework" for tax reform on September 27, the centerpiece of which was a cut in the corporate rate from 35% to 20%. The House Committee on Ways and Means estimates that the changes to the corporate tax code will lower federal revenues by $1 trillion over the next decade. But the loss to the Treasury is a gain to shareholders; the market's reaction was therefore unsurprising. On November 28, the Dow Jones industrial average rallied over one% on news that the Senate Budget Committee had approved the tax cut proposal.

So whereas the gap in post-election IEG gains between the United States and the rest of the developed world had fallen from a high of 0.35% in December 2016 to almost nothing in July, it is currently back up to 0.27%. The president's role on tax reform, as on health care, however, has been to play the boy in the back seat repeatedly yelling, "Are we there yet?" His Treasury's long-awaited economic analysis of reform, released on December 11, was nothing more than a one-page press release reporting the tax revenue increases implied by its controversial 2.9% growth forecast for the coming decade.

If the president still wants to show economic leadership, though, we have a suggestion for him. He can direct the Treasury to confront the distributional effects of the cuts, which are heavily skewed toward the superwealthy, and the budget deficits that will emerge if its unsubstantiated growth benefits don't materialize in full. He can also end his damaging fixation on bilateral trade deficits, which he grossly mischaracterizes as the United States "losing money". But we're not holding our breath.