END_OF_DOCUMENT_TOKEN_TO_BE_REPLACED

How will China respond to quantitative tightening...?

On 12 APRIL President Donald Trump said in an interview with The Wall Street Journal how he told Chinese President Xi Jinping his administration would be willing to be more lenient in a trade deal, writes Gary Dorsch at Global Money Trends.

Xi would need to help contain the nuclear threats from North Korea.

"I told him, 'You know we're not going to let our trade deficit to go ahead. But if you want to make a great deal, then solve the problem in North Korea. That's worth having deficits. And that's worth having not as good a trade deal as I would normally be able to make."

Trump explained the reason he changed his mind on one of his signature campaign promises is that labeling China as a currency manipulator could jeopardize his talks with Beijing on confronting the threat of North Korea.

"Our US Dollar is getting too strong, because the American people have so much confidence in me...It's very, very hard to compete when you have a strong Dollar and other countries are devaluing their currency."

As part of what might be a secret gentleman's agreement, China was able to avoid the label of a currency manipulator by the US Treasury, and – in return – Beijing must act to prevent the US Dollar from climbing above the psychological 7-Yuan level.

Last year, in 2016, the People's Bank of China (PBoC) burned through $320 billion of its foreign currency reserves, but the Yuan still fell about 6.5% against the US Dollar, its biggest annual drop since 1994. To help stop the Yuan's slide, China tightened rules on moving capital outside the country starting in January.

More importantly however, the PBoC has been draining Yuan from the banking system in recent months, as part of an ongoing effort to defend the Yuan's exchange rate versus the US Dollar. Through the end of last week, China had drained a net ¥815bn ($118bn) in liquidity through open market operations so far in 2017. Short-term lending rates have surged to two year highs.

Tighter liquidity has also hit the bond market. The yield on China's 10-year government bonds has soared in recent weeks, and closed at 3.64% today, the highest level in more than two years, and up from as low as 2.66% in mid-October 2016. 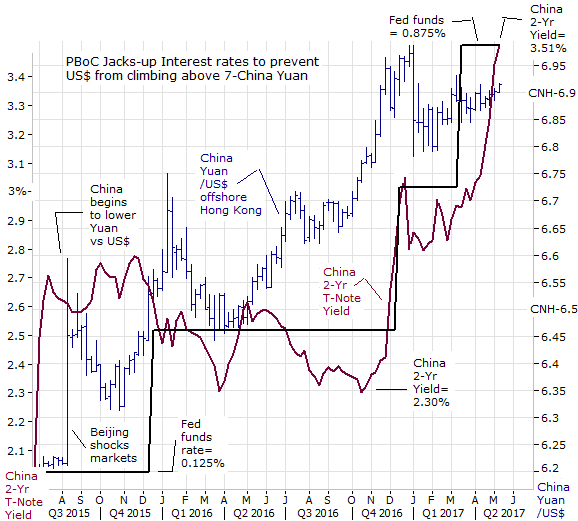 In turn, the Yuan's performance against the US Dollar in the Shanghai and Hong Kong offshore markets has been steady in recent weeks, after the US Dollar lost its upward momentum at just below 7-Yuan – the PBoC's red- line in the sand.

China's effort to stabilize the Yuan, and prevent the US Dollar from breaking through 7-Yuan, led to other signs of success. The PBoC's foreign exchange reserves rose in April for a third straight month, beating market expectations, as capital controls and a pause in the US Dollar's rally helped staunch capital outflows. Reserves rose $21 billion in April to $3.03 trillion, compared with an increase of $4bn in March.

However, if the Fed continues to hike short-term US interest rates in the months ahead, as expected, China would have to further tighten its capital controls or lift its interest rates again, in order to prevent the US Dollar from climbing above 7-Yuan. Already, the double barreled increases in Chinese and US interest rates in recent weeks are dealing a severe hammer blow to the Gold and Silver markets, which have collapsed since the Fed's April 14th meeting.

The Fed is now talking about two more rate hikes in 2017, with futures traders pricing in a 92% probability of the next hike to 1.125% at the upcoming June 14th meeting. On May 6th, San Francisco Fed chief John Williams reiterated his view that the Fed should begin trimming its massive balance sheet later this year.

"I think we're in a great place, the economy is doing well, we are getting awfully close to our goals, and I think we are well positioned to continue raising rates.

"An economy that overheats for too long, if we let this go too far, it creates greater risks down the road. I haven't changed my views on the appropriate pace of policy, at two to three more rate hikes in 2017."

In turn, additional rate hikes by the Fed would put enormous pressure on the PBoC to match the rate increases in the months ahead.

On May 1st, former Fed chief Ben Bernanke said he expects the Fed to go beyond rate hikes, and to launch Quantitative Tightening by year's end. In order to normalize its monetary policy, the Fed should begin to reduce its $4.5 trillion balance sheet by as much as half.

"I think they're aiming for something in the vicinity of $2.3 to $2.8 trillion, something like that," Bernanke told CNBC's Squawk Box. Bernanke says the Fed should not reduce its balance sheet until "short-term interest rates are comfortably away from their effective lower bound" to prevent potential financial markets disruption.

However, make no mistake about it, balance-sheet reduction is the same as a Fed tightening just under another name – Quantitative Tightening. Every reduction of $100bn from the Fed's bond portfolio could have the impact of increasing the US's 10-year T-note yield by +10-basis points, according to some economic models.

As such, China's growing debt load in the face of rising interest rates is "the elephant in the room," As US rates rise, China's rates are expected to also move higher. This will increase the cost of servicing $28 trillion of Chinese debts. Already, China's red-chip index hit fresh three-month lows on May 5th, as worries about tighter financial conditions have weighed on investor sentiment while sharp falls in crude oil and commodities prices weakened resources shares. An index tracking the top Chinese banking stocks slid to a fresh nine-month low.